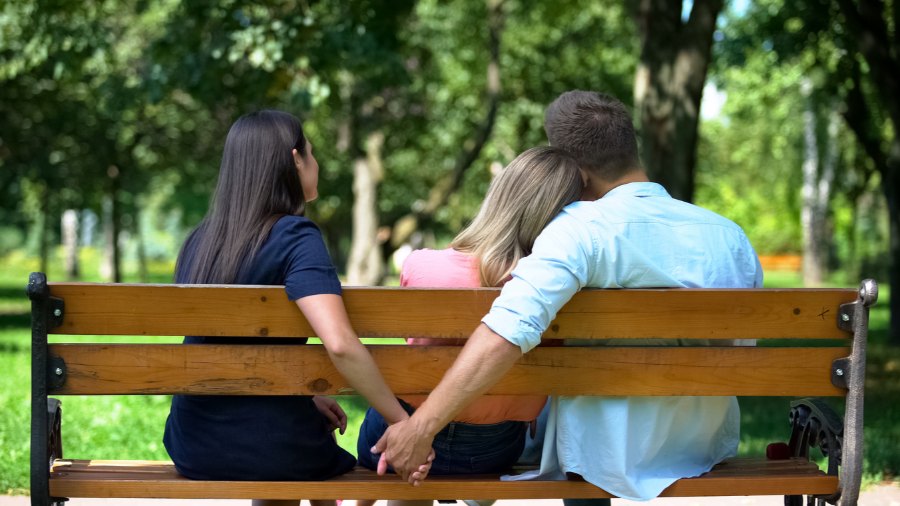 Is anyone surprised that HGTV recently featured its first “throuple,” in this case, a man and two women? But what else should we expect? This is the inevitable direction of our society’s slippery moral slide down. The avalanche goes downward, not upward.

People Magazine reported on February 13, “With 17 seasons under its belt, House Hunters made HGTV history on Wednesday when it featured its first throuple — three people in a polyamorous romantic relationship — on one of its episodes.”

The episode was titled, “Three’s Not a Crowd in Colorado Springs.” And it featured one line in which one of the two women, named Lori, commented, “This is a couple’s kitchen, not a throuple’s kitchen.”

Polyamory is now as American as apple pie.

Of course, for years we were mocked for predicting this very thing.

For years we were vilified for saying that the redefining of marriage to include homosexual unions would soon lead to more radical redefinitions.

For years we were criticized for pointing to the presence of polyamorous groups marching in gay pride events. “We’re next,” they confidently proclaimed.

Now “throuples” are being mainstreamed too. But why not?

If marriage is not the unique union of one man and one woman, then what is so sacred about the number two?

It’s the question that I’ve never had answered in all of my interactions with LGBT activists and their allies. (For a classic example, see my debate with Prof. Eric Smaw.)

Put simply, if marriage is not the unique union of one man and one woman, then what is so sacred about the number two? As I asked in a 2015 article, “If Love Is Love, Why Not Three Men ‘Marrying’?

For that matter, if love is love, why not four or more? Or why even need formal marriage? Conversely, why not marry yourself?

And Why Not Marry Yourself?

As absurd as this may sound, “self-marriage” (sologamy) has been growing in recent years. But why not? If marriage can be so fundamentally redefined as to include no member of the opposite sex (think of it!), then why not?

It’s like saying a duet can have one singer (or three). Or twins can refer to three babies (or one).

That’s just like saying marriage can refer to two men or two women. It fundamentally redefines the very meaning of the term.

A search today for “self-marriage” yielded scores of thousands of hits, including links to a 2017 YouTube video on the What’s Trending channel. It was titled, “Sologamy: People Who Marry Themselves.”

There’s even a link to the Self Marriage Ceremonies website, which states, “Self-Marriage is a profound rite of passage into wholeness, trust, self-responsibility, self-liberation, and love sourced from within. It is a ritual of transformation, of proclaiming what is true in your heart and being celebrated as you make it known that you are ready to live your full potential. It is the commitment to radically honor and express your gifts and the precious gift of your life. It is the freedom to live authentically in alignment with your deepest values. It is the dedication to love, no matter what.”

The search also answers the question, “What states allow self-marriage?” This was the answer: “Other states that allow some form of self-uniting marriage are Wisconsin, Colorado, The District of Columbia, California, Maine and Nevada. Jul 31, 2017.”

Now there is a throuple on HGTV, and soon enough, the word will no longer be flagged on spellcheck.

What About the Children?

And did I mention that the original husband and wife in this throuple have two children? Should that be a factor when adding in a third lover to the equation? As People reported, “Brian and Lori, who are legally married, fell in love with Geli after meeting her at a bar. The trio entered into a relationship with Brian and Lori exchanging vows with Geli in a commitment ceremony attended by their children.”

Sorry, but there’s nothing beautiful about this at all. To the contrary, it’s tragic.

“A Simple Unfolding of the Logic”

In my 2011 book A Queer Thing Happened to America, I wrote, “Until recently, polyamory had a different name: adultery. Not anymore! Just get all the parties involved to agree to the new relationships (really now, that jealousy stuff is so outmoded) and be poly — which rhymes with jolly — instead.”

“Not surprisingly,” I continued, “polyamory groups sometimes march in gay pride events, part and parcel of the sexual liberation vanguard. In fact, in 2004, polyamory advocate Jasmine Walston stated, ‘We’re where the gay rights movement was 30 years ago.’ Five years later, in 2009, Newsweek featured an article by Jessica Bennett entitled, ‘Polyamory: The Next Sexual Revolution’ with this bold, provocative beginning: ‘Only You. And You. And You. Polyamory — relationships with multiple, mutually consenting partners — has a coming-out party.’”

The real surprise, then, is not that HGTV featured a throuple in 2020. The surprise is that it took so long.

As noted by Prof. Robert P. George, “The normalization of polyamory rolls down the track, just as I and others predicted it would. It was, as I said, less a ‘slippery slope’ than a simple unfolding of the logic of social liberalism.”

With “logic” like this, the moral fall is inevitable.

First “That Won’t Happen, Crazy!” Then “What’s the Big Deal?”

There’s something else that’s inevitable. First, the slippery slope is denied. “You’re crazy,” we’re told. “This will never happen!”

Then, when the very thing we predicted happens, the same people say, “So what’s the big deal? You people are such prudes.”

And so the slide continues but at an even faster pace.

Sorry to say, but we told you so.