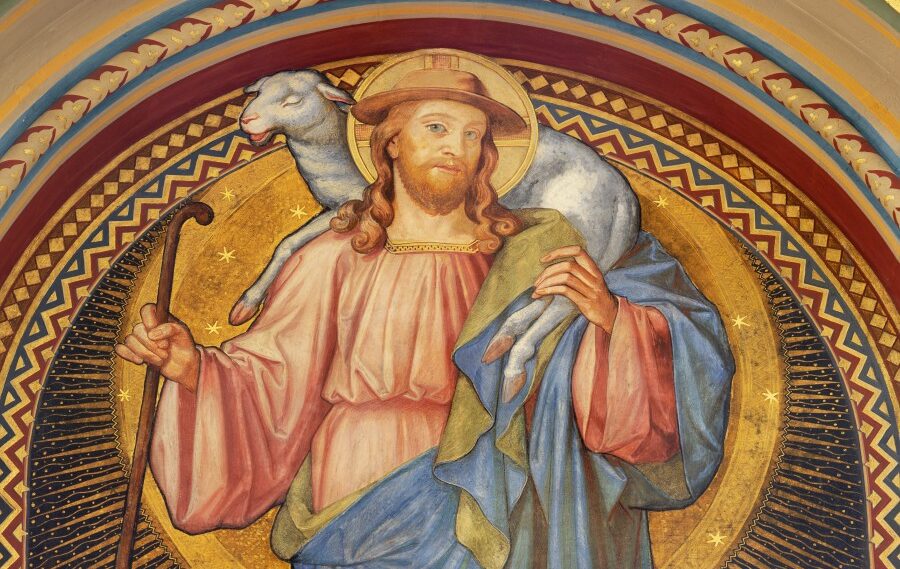 A fresco of Jesus the Good Shepherd from the Church of Saints Cyril and Methodius in Prague, painted by Carl and Franz Jobst.

“Jeeesus!” said the woman coming up the aisle toward me. I’d stopped at St. Vincent de Paul store to look at the books. She was wide, and short, taking short slow steps and staring at the books on the top shelf. She seemed vague, unfocused. Behind her was a tall, muscular man with close-cropped hair. They looked about forty.

“Jeeesus!” she said again. I scooted close to the shelf so they could get by me. “I just wan’ a pitcher of Jesus,” she said, and I realized she’d been looking at the pictures, the “art,” piled on the top of the bookcase.

It’s a Catholic-run thrift store, our local branch of an international ministry And outside the churches, the most obviously Christian enterprise in the town. It’s the one place around you’d come to find a picture of Jesus.

Why a Bald Jesus?

Balding? Why balding? Who’s ever seen a picture of a bald Jesus? I don’t think such a thing exists. No one, as far as I know, in the history of Christian art, has ever created a picture of Jesus with pattern baldness. I thought about this all the next day. Where could the woman and her husband have seen a bald Jesus?

I may have figured it out. The woman said “Jeeesus!” the way a very sick man left by himself might cry for the doctor. I’m guessing that she needed Him in some way. She didn’t seem well.

With the deep human instinct to see those we love, and those we need, she wanted to see Jesus. Her husband did too, at least for her sake. I’m thinking they felt themselves attracted to Jesus without knowing much about Him, because something they read or heard drew them to Him. A song on the radio, childhood memories, a picture in a book, a statue in front of a church, Bible stories they remembered, maybe a church they’d visited or even a Christian showing them kindness.

Maybe they’d heard one of Jesus’s comforting invitations to the weak and broken. As I say, she didn’t seem well. A need for healing may have led her turn to the Healer. And her husband to turn with her.

Something drew them. Something made her say as she walked down the aisle at the thrift store, “I just wan’ a pitcher of Jesus,” and made her husband say, “I do too, honey.” But what about that balding? Where’d they get that?

I’m guessing they’d seen religious or classical pictures and thought they were pictures of Jesus, because they don’t know how Christians have painted Him. They see a guy in a robe and think that’s Jesus. The great Greek philosopher Aristotle was bald. So was Julius Caesar in some pictures. The Apostle Paul is always pictured as balding. Francis of Assisi is often shown with the crown of his head shaved as a symbol of his commitment to Christ. He looks bald.

If I’m right, they represent many of our neighbors, maybe most. They know about Jesus. They know something of His power and His love, and sense that He stands before them with open arms. But they can’t tell Him from others who look kind of like Him. They know Him by reputation, but can’t pick Him out of a crowd.

Who knows if they’ll meet someone who’ll point them to the Man Himself. They need more pictures of Jesus. We can do something about that. The pictures they are most likely to find — are us.

David Mills is a senior editor of The Stream. After teaching writing in a seminary, he has been editor of Touchstone and the executive editor of First Things. His previous article was The Hidden Threat of Communism in America.

The Most Compelling Messianic Prophecy in the Bible