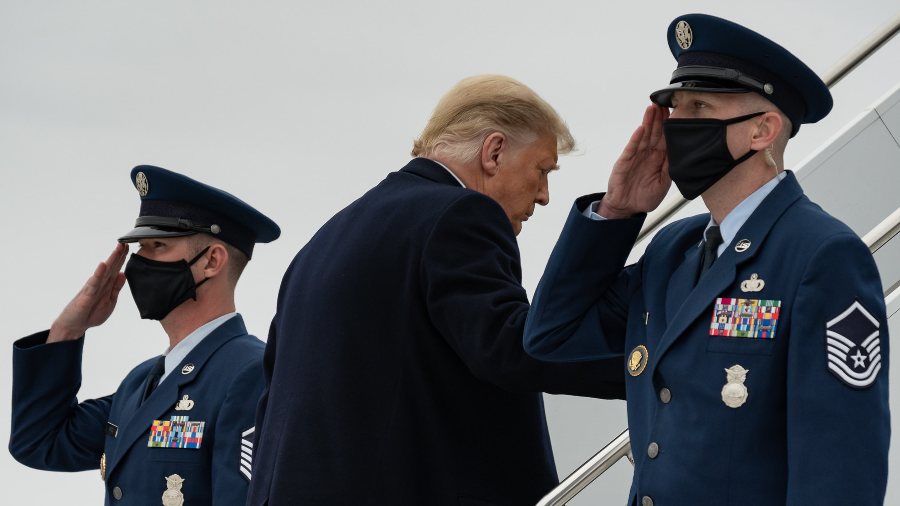 Remarkably, “According to a new Morning Consult/Politico survey, 29 percent of Republican voters said it is at least somewhat likely that Trump will be restored as president in 2021 — including 17 percent who said it is ‘very likely.’”

Perceived Likelihood That Trump Will Be President in 2021

For those wanting to dig into the data in depth, the 355 page survey has been posted online.

It states that the “poll was conducted between June 4-June 7, 2021 among a sample of 1990 Registered Voters. The interviews were conducted online and the data were weighted to approximate a target sample of Registered Voters based on gender, age, educational attainment, race, 2020 presidential vote, and region. Results from the full survey have a margin of error of plus or minus 2 percentage points.”

Are the findings reliable? Should they be taken seriously?

A summary of the poll states that “77% of voters said they believe America’s democracy is currently being threatened, including 82% of Republicans and 77% of Democrats.”

Some Trump prophets continue to dig deeper holes for themselves, even claiming that God is delaying Trump’s return to office in order to give the false impression that they were wrong in predicting his election in 2020.

This certainly sounds reasonable and is in keeping with suspicions and concerns on both sides of the electoral divide.

The poll also found that, “Only 40% of Republicans said they had at least ‘some’ confidence in the U.S. electoral system.”

This, too, seems reasonable, if actually low.

At the same time, the poll claimed that 13 percent of Democrats and 17 percent of Independents also believe it is likely that Trump will be restored to the presidency in 2021. Really?

Could it be that the fearmongering of the left has produced these concerns? Or could it be that Trump’s presence is just that ominous, with the threat of his imminent return lurking in the back of people’s minds?

The Daily Mail reported on June 25 that, “The Department of Homeland Security is concerned by the theory Donald Trump will be reinstated as president in August and is monitoring extremist online communities for threats of violence, the agency’s top counterrorism [sic] official said Thursday.”

John Cohen, assistant secretary for counterterrorism, stated that he “was responding to the conspiracy theories sparked by reports from the New York Times‘ Maggie Haberman and the National Review earlier this month that Trump is telling aides he could be back in the Oval Office by August.”

The Mail also stated that Lindell, “has also been spreading the theory publicly and claims he is the source of the claims.”

Is there any truth to these claims? Is Trump himself fueling the fires of speculation? That, I do not know.

What I do know is that some Trump prophets continue to dig deeper holes for themselves, even claiming that God is delaying Trump’s return to office in order to give the false impression that they were wrong in predicting his election in 2020.

In the words of Hank Kunneman, “People have been saying, ‘Why is the Lord taking so long? Why are the prophets missing it?’”

Unfortunately, as bizarre as it may seem, there are still fervent believers hanging on to the words of these alleged prophets. (Within the last few days, a commenter on my YouTube channel rebuked me, saying, “He [meaning me] rejected the prophets [meaning, those who wrongly predicted that Trump would be inaugurated on January 24] and accused the brethren standing for truth of being idolators. He believed the lying media on the election. They are his prophets. This is a man not worthy of a platform.” For a major article in Christianity Today on the failed prophecies and corrective responses to them, see here.)

So, the deceived are still being deceived, false hopes are still being stoked, and the media, especially on the left, continues to feed into the conspiracy theories, ever fearful of the ominous scepter of Trump.

A 2021 Return of Trump Isn’t Possible

The reality is that claims of election fraud will continue to be investigated, as they should be. Confidence must be restored, and there are valid reasons for concern.

Trump will also continue to snipe from the sidelines, as well as influence the news cycle and the direction of Republican politics.

But under no circumstances will he be restored to the presidency this year (or at any time before 2024).

So, don’t get your hopes up and don’t hold your breath. Instead, concentrate on making your own life count, get involved, as appropriate, with the current political scene, and whatever you do, remember not to look to Trump (again) as some kind of political savior — especially with hopes of his return to the presidency this year.