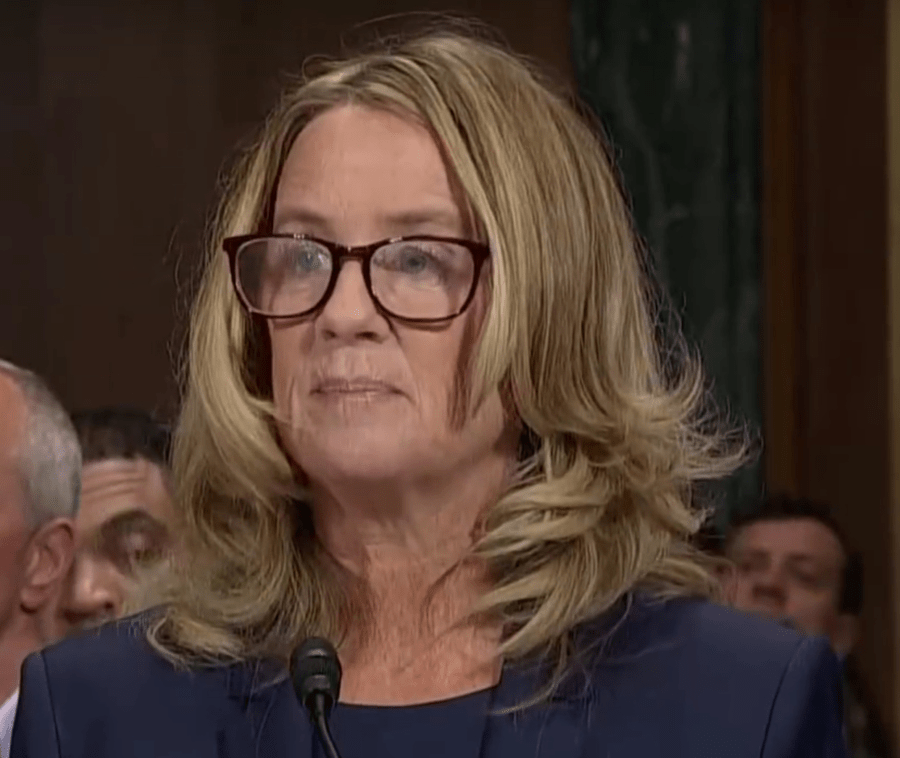 By Rachel Alexander Published on September 5, 2019 •

Christine Blasey Ford accused Supreme Court nominee Judge Brett Kavanaugh of attempting to rape her. She nearly derailed his appointment to the Court. And why? Was she a real victim? Did she have another motivation?

Yes. According to a new book by an experienced journalist, Ford wanted to taint his decisions on abortion. And he’s got the video proof.

She wanted to cast a cloud over his votes and opinions once he was confirmed to the U.S. Supreme Court. In Search and Destroy: Inside the Campaign Against Brett Kavanaugh, Ryan Lovelace of the National Journal argues that Ford and her attorney, Debra Katz, worked overtime on the plan.

Ford’s accusations were dubious. She could not provide any evidence to back up her claims. She couldn’t remember the date or location of the incident. She wasn’t even clear on the year. The four witnesses she named failed to confirm her story. They said they weren’t at the party with her where she claimed Kavanaugh attempted to rape her.

Despite this and other dubious, even outrageous allegations, Kavanaugh was confirmed 50-48 by the Senate. His confirmation created a five justice conservative majority on the Court. It was the result liberals wanted to stop.

Ford’s Testimony Will Put ‘an Asterisk Next to His Name’

How do we know this? Katz gave a speech after Kavanaugh was confirmed, where she revealed this motivation. Speaking at the University of Baltimore’s 11th Feminist Legal Theory Conference entitled “Applied Feminism and #MeToo,” she said Ford’s testimony will put “an asterisk next to his name” when he “takes a scalpel to Roe v. Wade.” She went on, “that is part of what motivated Christine.”

“In the aftermath of these hearings, I believe that Christine’s testimony brought about more good than the harm misogynist Republicans caused by allowing Kavanaugh on the court,” she said.

We were going to have a conservative [justice]. … Elections have consequences, but he will always have an asterisk next to his name. When he takes a scalpel to Roe v. Wade, we will know who he is, we know his character, and we know what motivates him, and that is important; it is important that we know, and that is part of what motivated Christine.

Katz resented the “white men” on the Judiciary Committee, Lovelace wrote. She described Kavanaugh himself as “savage.”

And what did she think of the Republicans’ defense of their beleaguered nominee? The administration responded as any administration would, when their man — a man they believed in  — was being unfairly beaten up. Katz believes Trump’s team tried to discredit Ford with “relentless cruelty.”

Civic Duty Not Really Her Motivation

“Before the confirmation,” Lovelace writes, “Ford had maintained that she came forward out of a sense of civic duty to provide information that she thought senators needed to know before voting on Kavanaugh.” Now, this new information about her real motivation calls into question what she said at the confirmation hearing. “I think if we knew in September what we know now, there would have been all kinds of questions at the hearing about this,” Lovelace told the Daily Caller News Foundation.

Dr. Christine Blasey Ford explains she's not testifying because she wants to, but because "it's her civic duty." https://t.co/hib1LKoWh8 pic.twitter.com/sbuVfD5rev

Newsbusters reports on how the mainstream media insisted Ford lacked a political motivation. However, at the same time, NPR exposed Ford’s political activism. She contributed to Democratic organizations. She attended a March For Science in San Francisco, which protested Trump administration cuts to research. And she signed a letter condemning the Trump administration’s policy of separating illegal immigrant children from their parents at the border.

Worse, Katz has a history of minimizing sexual accusations against Democrats. Apparently sexual abuse is only bad when Republicans are alleged to have done it. “Paula Jones’ suit is very, very, very weak,” she said on CNN’s Talkback Live in March 1998. “She’s alleged one incident that took place in a hotel room that, by her own testimony, lasted 10 to 12 minutes. She suffered no repercussions in the workplace.”

What if Katz had treated Kavanaugh the way she treated Bill Clinton? We might not have heard of Christine Blasey Ford. And Brett Kavanaugh would still be on the Supreme Court. But without having suffered the accusations we have good reason to think were baseless.