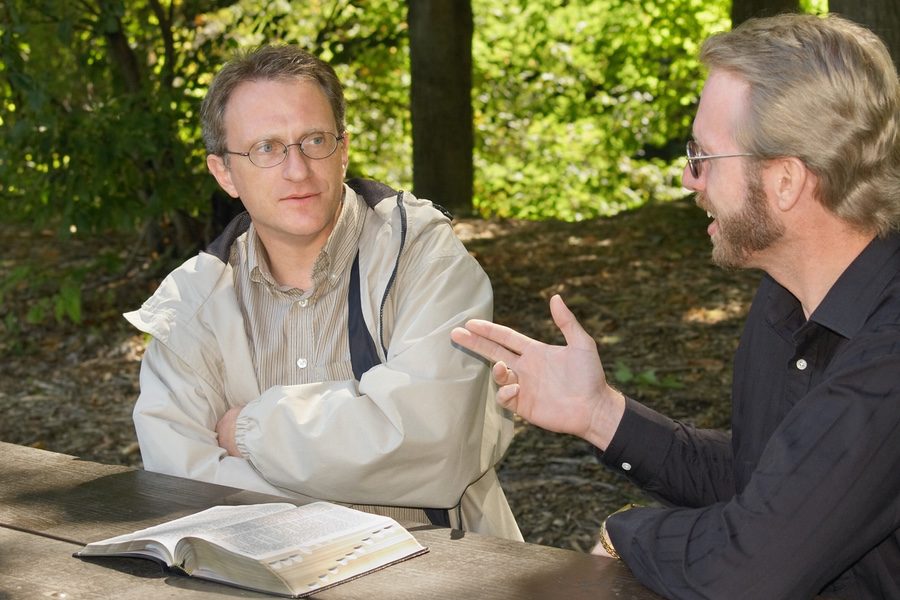 So what can we do about that? How can we recover Christianity’s witness and credibility during this election year? Here’s the word I’m hearing from some quarters. It’s the message some #NeverTrump believers apparently think will work:

“American evangelicalism is made up mostly of moral idiots. Most Christians are just politicized hypocrites. They don’t care how rotten Donald Trump’s character is, as long as they get what they want from him: racism, white supremacy, homophobia and taking care of the 1 percent. Of course, some of us are wiser and better than that. We’re doing our very best to distance ourselves from the rest. Because we’re the real Christians, doncha know?”

Yeah, right. That’ll boost our witness. That’s how you show the world the glory of God in Christ Jesus and in His Church!

Umm… no. There has to be a better way. Some people on the #NeverTrump side know it, but obviously not all of them.

I sympathize with #NeverTrump believers who think it’s an unmitigated moral mistake to endorse Donald Trump with our votes. I sympathize, but I disagree.

In fact, those who made an early, lifelong, and unbreakable commitment to #NeverTrump have locked themselves into a decision based on incomplete data. Yes, Trump has done some things that were completely wrong, but it’s illogical to think that doing some completely wrong things could make him completely wrong. (We’re talking politics here, not eternal salvation, where there’s a different answer we all have to deal with.)

But if that view of Trump is illogical (and it is), it’s an even greater error to treat believing brothers and sisters as moral idiots for not agreeing with you that Trump is completely wrong.

A Start Toward a Better #NeverTrump Answer

So what should a #NeverTrump Christian say instead? Let me suggest you try the following on for size. It won’t fit every #NeverTrump believer, but you can adapt it to work for your own convictions.

Let’s start with something most #NeverTrump believers seem to have in common:

“I’m a firm #NeverTrump Christian. Donald Trump has just done too much wrong, with women, minorities, the disabled, and more, and he’s repented too little. Considering how we held Bill Clinton to account for his moral failings, we’d be hypocrites not to do the same with Trump. That’s why you won’t find me voting for him.”

Some would also add all or part of the following:

“Besides that, his border policies harm families, and he’s shown he’s a racist Islamophobe. And he’s been impeached, for goodness’ sake! The case against him sure looks strong.”

More Than One Side to the Story

So what good can a #NeverTrump Christian say about our president after all that? It’d be great if they’d find out for themselves by just listening to pro-Trump believers. That doesn’t always happen, though, so I’ll suggest this to help them along:

“At the same time, though, I keep hearing that the case against him has another side. Whether I agree with it or not, I can at least see how other believers would see things differently — and without being the hypocrites some people falsely accuse them of being.

“Trump’s position never got a hearing in the House impeachment inquiry. The Stream has been making a credible case for months that Democratic corruption outdoes anything Trump has tried since 2016. I can see how believers would say so-called “Islamophobia” isn’t directed against all Muslims as people, but against certain countries known to harbor and nurture terrorism. And the problems on the border? Believers have even made a decent moral case for protecting our borders, and it’s not at all clear that these children are being so badly mistreated, anyway.”

Putting #NeverTrump on Notice: You’ve Got a Responsibility to Fellow Believers

See how that can work? I’m not asking #NeverTrump people to agree with other believers on all this. But they do need to see that none of these issues are as one-sided as they’ve made them out to be.

I can’t fill in all those issues fully here, but I’m at least putting #NeverTrump believers on notice: If you think Trump is unambiguously wrong on all this, and if you’re ready to cut off most of evangelicalism over it, you’re rushing to judgment. You really ought to do your homework first, including the part I don’t have time to do for you here. You need to own at least that much responsibility for yourself.

What about things Trump really does wrong, though? We all have a list of such things. We don’t all have to agree what’s on that list; we just have to decide what we’re going to do with our disagreements over it. So here’s one last stage in a message for my #NeverTrump friends to try on:

“I can’t vote for Donald Trump. It’s an integrity issue for me. I see too much wrong in his character. I know he has evangelicals supporting him, though, and I know they see many of the same flaws. But they tell me they also see him doing great good.

“They point out that Trump is protecting freedom of religion. He’s giving a measure of real support to marital and moral sanity. He’s protecting crucial American strength at the border and in our military. The economy is seriously benefiting from his tax cuts and de-regulating decisions. And of course he’s pro-life, too. No, he’s not perfect; far from it. All in all, though, his policies are doing us good, and they’re certainly light-years better for the country than Democrats’ would be.

“As for me, a #NeverTrump Christian, I throw all that in a balance based on my own convictions, and I find that his flaws outweigh all that. But that’s the real difference between me and pro-Trump Christians, isn’t it? We see nearly the same issues, both good and bad — even though we differ on the facts on a few of them. It’s just that we weigh them differently. We don’t have different morals, just different moral priorities, when the time comes we have to weigh things in a balance. And while I have my convictions, I’m not going to pretend my moral priorities have the Word of God stamped on them.

“So yes, we disagree. But I can at least appreciate my fellow Christians’ position on Trump. I’ll even help them explain it, to the best of my ability, for the sake of our brotherhood and unity in Christ.

“I don’t expect this will meet with everyone’s approval, for there will still be people, especially on the Left, who simply hate Trump. But it should at least show how it’s possible for believers to disagree on Donald Trump without violating our own moral convictions.”

Let’s Support Each Others’ Witness

I suppose some people reading this will ask, “So where do you see any Trump-supporting believers trying to explain the #NeverTrump viewpoint?” My answer: ”What? You missed it? I just got done doing that!”

I’ve done two things here: I’ve offered my best shot at explaining #NeverTrump and its reasons. (Feel free to explain further if I missed something important.) And I’ve shown how #NeverTrump believers can return the favor — while practicing the kind of unity that can truly support the Christian witness we all care about.

Christian Disunity: If Only We Could Blame the President!