Music Will Not Save You: What We Learn From Chris Cornell’s Death 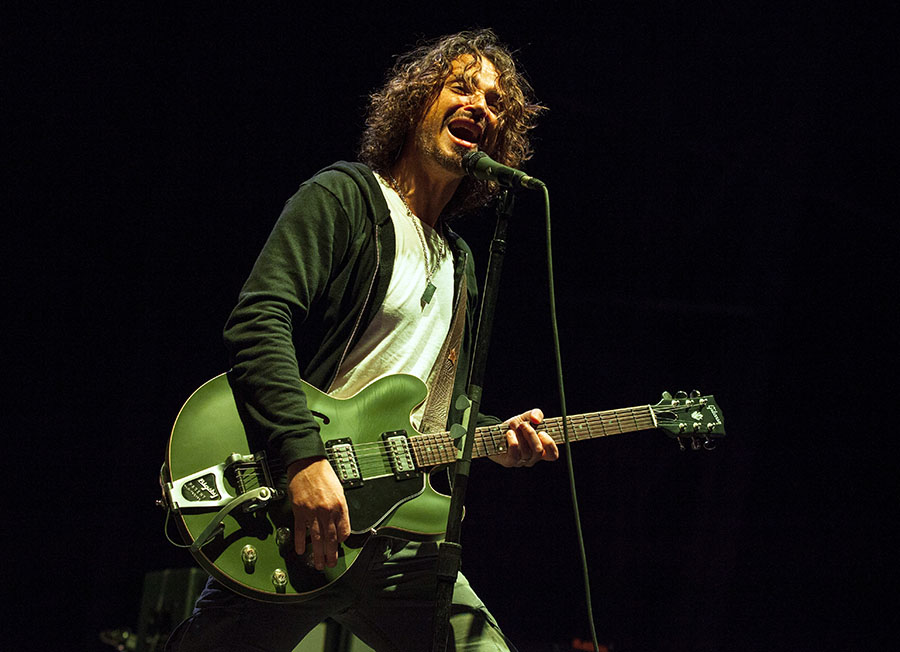 FILE - In this May 19, 2013 file photo, Chris Cornell of Soundgarden performs at Rock on the Range in Columbus, Ohio. Cornell, 52, who gained fame as the lead singer of the bands Soundgarden and Audioslave, died at a hotel in Detroit and police said Thursday, May 18, 2017, that his death is being investigated as a possible suicide.

Today legions of GenXers and people in the Pacific Northwest are mourning the loss of grunge rocker Chris Cornell. He was found dead in his hotel room in Detroit this morning, an apparent suicide.

Seattle’s indie radio station KEXP played hours of tributes. Many gathered at the station to be together as they remembered his songs. These fans cite his music as “life-saving,” with the priestly DJ pronouncing Soundgarden albums as salvific in his own life.

Cornell’s mental illness is acknowledged carefully, with a strange lie attached. Yes, he struggled with depression — but music saved his life! they insist in the face of his death.

His death is shaking people who have reached middle age and weathered life’s storms through turning to his music. Cornell gave voice and instruction to a generation of lonely people. Many saw themselves in Cornell’s openness about his mental health issues and found hope in his seemingly stable and happy life with his family and his bands.

Music is a gift that can connect us to each other and draw us close to God. But music is not a savior.

He had just given a stellar performance with his friends and sent messages of love and hope. No one saw this coming.

“Chris dealt with severe depression and turned to music,” KEXP DJ John Richards said on his radio show today, “and it saved his life.”

Except it didn’t. That’s what the heartbreak shows. You can’t get saved through music, even if you start a crazy-amazing band with your best friends and find the love of your life and have a family you care for dearly.

It’s not that music doesn’t help. It is a great outlet. Music can transcend pain, and it’s a common place we turn for escape. It’s definitely a better choice than drugs. People who turn to music for salvation are looking for something to heal them. Music may “hath charms to soothe a savage breast,” but “tis not in harmony to calm my griefs.”

This may be the hardest thing as people in the music scene and in a city whose identity is built on music to grapple with. Music will not save you.

This is painful to say. But maybe there’s a reason so many people who lose themselves in music also succumb to alcoholism and drug addiction. No, I’m not saying that rock music is from Satan or that it leads automatically to drug addiction and death. But the correlation between people who are seeking something in music and losing themselves to drugs is what both have to offer: escape, and for brief moments, a kind of transcendence.

As anyone who has ever been a lonely child lost in hours of music knows, there is something magical about giving yourself over to the sounds in your ears. It can transport you away from problems and alter your mood.

Cornell was a loner who suffered from depression and anxiety from an early age, and he found solace in Beatles records before learning to play the drums and starting a band at 16. He also found drug addiction at 13 and fought relapses for the rest of his life.

Cornell enjoyed the camaraderie with a scene of Seattle musicians, not just in his official bands, but through a family-style scene where friends lived together and played together on random side projects and jam sessions. He was thoughtful and kind, respected and known and, by all accounts, warmer and easier to live with than someone like the tormented Cobain.

What if, ultimately, those connections aren’t enough? What if having friends and family with close relationships isn’t enough?

Eventually, every lonely and broken person needs more love than an adoring crowd can give. They need more than the intimate and personal love of a family. They — we — need the healing power that only the love of God can perform.

Chris Cornell was raised Catholic and converted to the Greek Orthodox Church after marrying his second wife, Vicky Karayiannis. He disclaimed “any particular religion” in interviews. He also wrote some of his songs as prayers:

Won’t you light my way

Won’t you light my way

May God have mercy on Chris Cornell’s soul. And may we all be willing to listen to God’s answers.

Wind Down Instead of Winding Up

He Was Given a 3 Percent Chance of Ever Moving Below the Neck Again. Seven Years Later, He Walked Down the Aisle With His Bride

Anthony Bourdain, Suicide and the Love of God

Teens, Depression, and Divorce … and Hope