The Moral Courage of Antonin Scalia 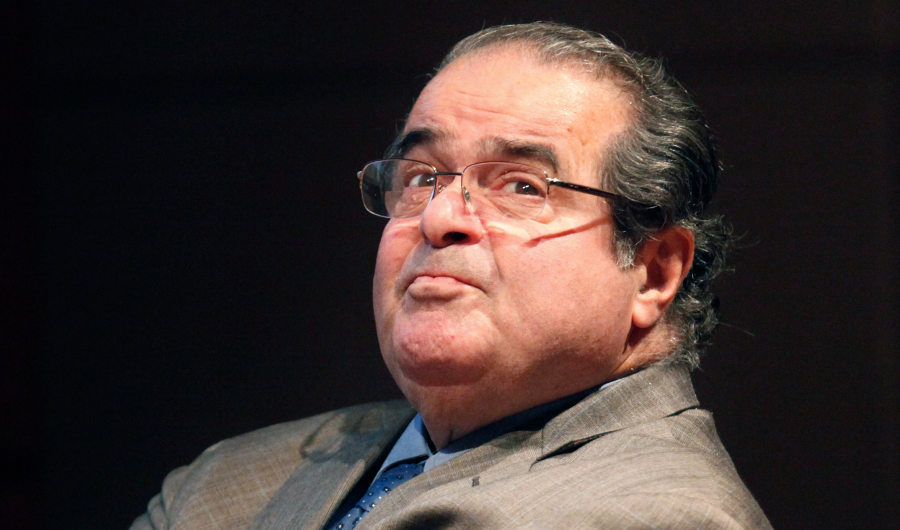 On Wednesday night a sold-out crowd of Catholics celebrated the life and faith of Supreme Court Justice Antonin Scalia with a call to moral courage and a place for faith in the public square.

The Catholic Information Center (CIC) posthumously honored Justice Scalia with their annual Saint John Paul II Award for the New Evangelization, in recognition of Scalia’s faith and witness for Christ.

The CIC works to reach young professionals in Washington, DC, with the light of Christ. “Like so many things that are Catholic, the name is profoundly opaque,” as Thomas Yannucci, chairman of the CIC’s board, wryly put it. “It really is a field hospital to heal people where they work, where they live,” he said, quoting Pope Francis.

Robert George, the Princeton professor everyone wishes they’d had in college, hosted the evening with a reminder that “tonight is not at all a night for sadness” over Scalia’s death. “Tonight we are celebrating the fact that there was such a man who set such an example.”

George noted what every speaker that night would join him in pointing out: that Justice Scalia’s “fidelity to the Constitution” was “a further expression of that deeper and more profound devotion to Jesus Christ and to His Church.

“He famously said we are called to be fools for Christ,” George explained, “and gosh, that was so inspiring to me.”

Archbishop Donald Cardinal Wuerl gave the invocation, thanking God for Scalia’s “example of courage” and for the “foretaste of the heavenly banquet” that the evening was.

Ed Whelan, president of the Ethics and Public Policy Center and former clerk for Justice Scalia, gave the keynote address, highlighting Scalia’s character by quoting some of his unpublished speeches.

In one such speech, Scalia spoke to an ROTC group on the nature of character and courage. He quoted C. S. Lewis’s Screwtape Letters, saying “courage is not simply one of the virtues, but the form of every virtue at the testing point.”

That lesson — that our choices really matter, and that everything depends on them — is in some ways easier for the soldier to remember when life hangs in the balance. It is harder in the layman’s endless days of peace, where moral courage rarely requires the sacrifice of one’s life. But for most of us, that is the long fight we are in for — putting things right in the world God created, starting with ourselves.

Whelan explained that Justice Scalia was “an exemplar of moral courage, a man who strove to put things right and wouldn’t be lured away or cowed from doing his duty.”

Scalia saw his work as Supreme Court Justice as a secular vocation where his role was not to be “a Catholic jurist,” but to tell the truth about what the Constitution does and does not allow. Whelan briefly touched on Scalia’s work in defense of religious liberty, on the nature of marriage, and exposing the lie of Roe v. Wade reiterated in Planned Parenthood v. Casey.

Whelan compared Scalia to Thomas More, noting that both men were noted for their legal brilliance, their wit and their capacity for friendship — and “both were embroiled in controversies over the nature of marriage and religious liberty.”

He noted that Scalia spoke about Thomas More in a speech where he always pointed out that “the reason he died was, in the view of almost everyone at the time, a silly one.” More went to his death unsupported by his friends or even his wife.

“He was not seeing with the eye of men but the eyes of faith,” Scalia said. “I hope to impart to you the courage to have your wisdom regarded as stupidity.”

“May we too, have the courage to suffer the contempt of the sophisticated world, amen,” Whelan prayed.

Moved by words Scalia’s former clerk shared on the importance of living out a public faith, Robert George celebrated Scalia’s determined efforts to derail “the train that attempted to relegate religion to the private sphere” and exclude faith from public life. “That has become such a normal and accepted position in our society, that we forget what Scalia’s great predecessors had to say about the place of faith in public life.”

George then read Abraham Lincoln’s Proclamation 97 from his smartphone: “It is the duty of nations as well as of men to own their dependence upon the overruling power of God, to confess their sins and transgressions in humble sorrow, yet with assured hope that genuine repentance will lead to mercy and pardon, and to recognize the sublime truth, announced in the Holy Scriptures and proven by all history, that those nations only are blessed whose God is the Lord.”

“You see,” George said, “Justice Scalia was not alone in proclaiming that we should be fools for Christ. Let’s go forth inspired by his example and own that we are a nation under God.”