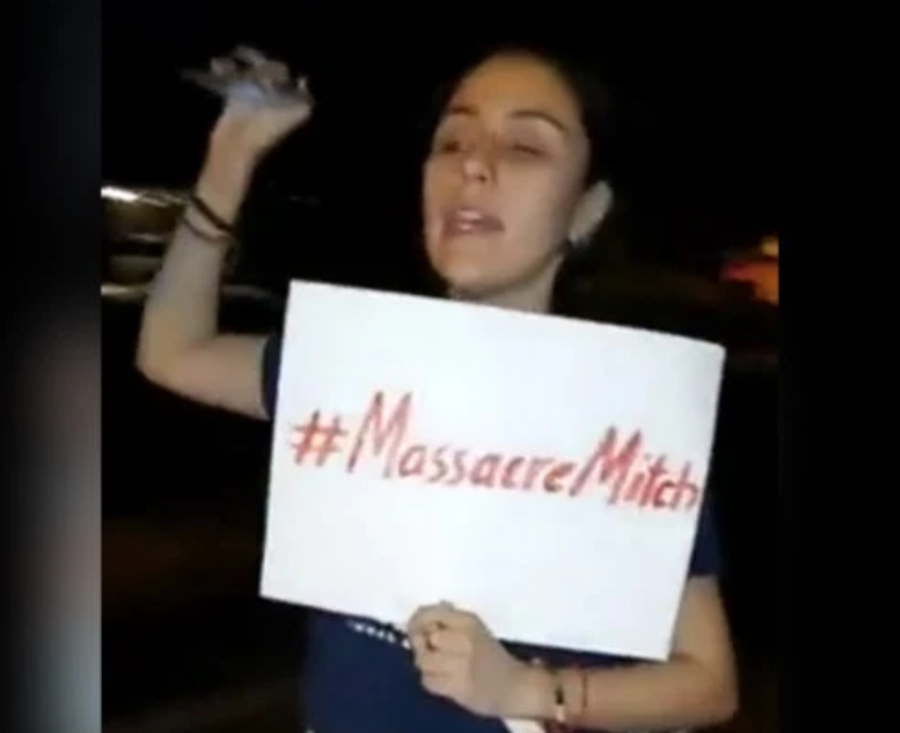 A protester outside Mitch McConnell's house.

It was something his supporters and his opponents needed to see. Mitch McConnell’s official Twitter campaign account posted a video on Twitter last week of an angry mob protesting outside his home. The leader of the mob yelled “F*** Mitch” and said she hopes “someone just stabs the <profanity deleted>.” She also said someone should “just stab” a voodoo doll of the Senate Majority Leader “in the heart.” She says she wishes he had broken his neck instead of his arm (he’s currently recovering from a fall).

Someone at the end of the video yells “Die!” Others chant “Murder Turtle!” in reference to his nickname. Parts of the video are bleeped out, probably due to the extreme profanity. This is what one of American’s senior political leaders endures. People need to know how part of the left threatens the people they disagree with. It was a useful tweet.

The McConnell team appealed, and at first Twitter refused to remove the suspension until the tweet of the video was deleted. The RNC, Trump campaign, NRCC, NRSC and other Republican groups said they would boycott buying ads on Twitter.

We stand with Sen. McConnell & won’t spend another dime with @Twitter until they unfreeze his account. Locked it after he showed video of threats against him.

Twitter is cool with Hamas or Louis Farrakhan, but not Senate Majority Leader.

Twitter also suspended two other accounts that posted the video, that of Ben Goldey, a congressional staffer, and journalist Ryan Saavedra. Saavedra said that Twitter told him they blocked it to protect McConnell.

Goldey obtained the video from the Facebook page of Chanelle Helm, a Black Lives Matter activist. One of the people on the video. She posted later that Facebook had suspended her for seven days. However, she told The Louisville Courier Journal, she did not regret her profane comments.

So McConnell’s tweet exposing the abuse and threats he endured was reason for Twitter to silence his account. But apparently dreaming of killing him is all right. Twitter allowed the hashtag #MassacreMitch to trend. It arose after the mass shootings in El Paso and Dayton, in response to McConnell refusing to consider two gun control bills in the Senate.

Last week, it was revealed that Trump is drafting an executive order to deal with it.

This comes after President Trump announced last month that he was going to explore “all regulatory and legislative solutions” available to stop big tech from discriminating against conservatives. He held a meeting at the White House with online conservative activists to discuss the problem. Last week, it was revealed that Trump is drafting an executive order to deal with it.

CNN said on Saturday that the order will direct the FCC and FTC to police the tech giants’ censorship. It is titled “Protecting Americans from Online Censorship.”  The administration launched a website in May to accept these complaints. It has received over 15,000 complaints, CNN said. Trump will turn the complaints over to the FTC.

The proposal will narrow the protections provided to companies under the Communications Decency Act. Its Section 230 protects providers of a computer service, or platforms, from being sued over their content. They are considered platforms, or hosts, not publishers. Section 230 does not protect publishers.

But the social media giants are acting more like publishers than platforms. They pick and choose which content gets to stay. Under the order, if a company removed or hid a social media post without informing the user, the user could sue the company. The user could also sue if the company acted unfairly or deceptively in deleting or hiding their content.

This approach to resolving big tech censorship should please free market proponents. Instead of direct regulation, it merely takes away a legal protection that the social media giants don’t deserve. Consumers will be able to sue the giants. The FCC and the FTC will merely determine when and if that legal protection should still apply.