Even as brave U.S. troops are infected by COVID-19, selfless American heroes keep stepping forward to help win the war on the coronavirus. 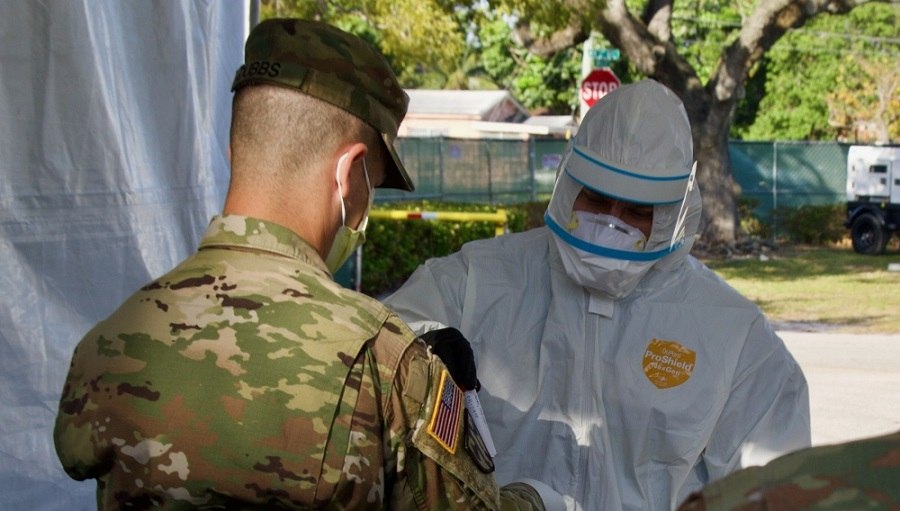 A Florida National Guard soldier collects a sample from a patient at a community-based COVID-19 test site near Marlins Park in Miami on March 25, 2020.

On this day in 1945, the U.S. military triumphed at Iwo Jima in one of human history’s bloodiest battles. Seventy-five years later, our nation’s valiant service members and their families are showing similar courage during America’s new war against the coronavirus.

Anyone who reads my books or follows my writing here on The Stream knows that I do not make this comparison lightly. While a World War II analogy may seem like a stretch to some, thousands of brave U.S. troops going into battle while knowing they could easily contract an invisible, deadly virus is undeniably selfless and heroic.

As of Thursday morning, 280 U.S. troops had tested positive for COVID-19, with the number of infections seemingly rising by the hour.

Just in: The Navy has discovered several more cases onboard the USS Theodore Roosevelt aircraft carrier, says @SECNAV. The Navy is in the process of testing "100 percent of the crew of the ship." She is pulling into Guam now and will be pierside.

Also as of Thursday morning, eight U.S. Navy sailors aboard the USS Theodore Roosevelt had tested positive for the coronavirus, which is now in Guam for more testing. All eight sailors were flown off the aircraft carrier to receive further treatment, according to the Wall Street Journal.

Two massive U.S. Navy hospital ships, the USNS Mercy and USNS Comfort, are being mobilized to treat COVID-19 patients off the coasts of Los Angeles and New York, respectively. In addition to the hundreds of U.S. Navy and civil personnel already aboard the ships, more than 100 reservists are being called up to help with the unprecedented emergency virus treatment.

Indeed, America’s volunteer warriors are inspiring us with their willingness to step forward at great risk to their own health. Like doctors, nurses, first responders, delivery workers and countless others, the brave men and women of our military are performing brilliantly amid the uncertainty of a rapidly evolving public health crisis.

No Runs, No Hits … But Lots of Testing

Drive-thru #COVID19 testing for symptomatic seniors age 65 and over will be available BY APPOINTMENT ONLY beginning tomorrow at @Marlins Park. DIAL 305-499-8767 to request an appointment. pic.twitter.com/yVAmTeHoxq

I was supposed to attend a Major League Baseball game this coming Monday night in Miami. Instead of hosting Marlins games, however, the stadium is now one of many coronavirus testing sites around the country. As you can see in the above photo, the Florida National Guard is helping to ensure a safe, orderly testing process.

We should all be grateful to the National Guard, which had mobilized 11,400 of its citizen warriors to specifically battle COVID-19 as of Thursday. On Monday in Ohio, five National Guard soldiers even stopped to rescue a car crash victim after an already busy day fighting the spread of a deadly virus.

“We knew it was a serious situation,” Ohio National Guard Spc. Michael Flipse said. “We wanted to help in any way possible.”

When they saw a car crash on their way back to their base from supporting the COVID-19 response, these @OHNationalGuard members knew they weren't done for the day… https://t.co/6D9fp9isDG

Another key contribution is being made by military medical experts, including U.S. Army 2nd Lt. Ethan Green. As Military.com reported earlier this week, 2nd Lt. Green is among those racing to develop a coronavirus vaccine at the Walter Reed Army Institute of Research and other military research facilities.

“The nature of what I’m doing, it’s an amazing opportunity, and I thank God every day that I’m doing it,” the soldier told Military.com.

We also thank God for the sacrifices of our courageous troops and their families. The thousands of heroes serving overseas as the coronavirus crisis unfolds, particularly those in Iraq, Afghanistan, and other perilous places around the world, deserve a special mention in our ongoing prayers. May the Lord shield these warriors and their families from danger.

In Flags of Our Fathers, James Bradley and Ron Powers wrote the following about the American warriors who fought at Iwo Jima.

“They were proficient in the techniques of war. But more important, they were a team, ready to fight for one another,” the authors wrote. “These boys were bonded by feelings stronger than they would have for any other humans in their life.”

Thank you to the extraordinary men and women of our Armed Forces for doing what those who came before you were doing 75 years ago today: risking your lives to defend the defenseless. Every hour of every day, you are making America proud.