What Melania’s Stilettos Revealed About the Media 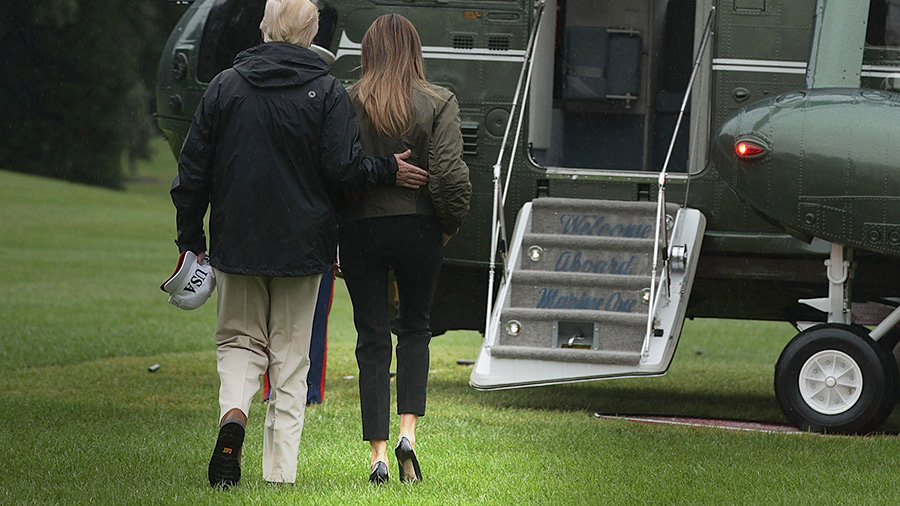 The internet lit up earlier this week when pictures emerged of the First Lady wearing high-heel stilettos as she and the President began their trip to visit hurricane victims in Texas. “How inappropriate!” the pundits howled. What was she thinking? Really now, was she on her way to a fashion show or to a devastated, flood-ravaged state?

The reaction to her footwear actually told us far more about the media than about Mrs. Trump who, for the record, wore the high-heels to the plane and changed them before landing. (Drat! That blunted some of the attack.)

In short, the stiletto scandal revealed the degree to which so much of today’s media has become a glorified, perpetual gossip column, with mainstream media outlets bearing more resemblance to the National Enquirer than to serious news sites.

The footwear controversy also underscored just how much animus there is in the media towards the President, even in the midst of a national crisis. All focus should be on Melania’s ill-timed, insensitive, ultra-high heels.

Just look at these headlines from some of the bigger media players:

Getting into a little more depth, the Washington Post article explained that the stilettos presented “an image that suggested that Trump is the kind of woman who refuses to pretend that her feet will, at any point, ever be immersed in cold, muddy, bacteria-infested Texas water. She is the kind of woman who may listen empathetically to your pain, but she knows that you know that she is not going to experience it. So why pretend?”

The Times asked, “When is a shoe not just a shoe? When it is a pair of very high, needle-thin heels worn by the first lady of the United States on her way to the site of a natural disaster. Then it becomes a symbol for what many see as the disconnect between the Trump administration and reality; another example of the way in which this president and his family continue to define ‘appropriate’ their own way; and an excuse for partisan name-calling.”

Yes, all this because of the First Lady’s footwear! And remember: These comments are from from the Post and the Times, not the Enquirer.

“First the now — First Lady (perhaps unwittingly) plagiarizes Michelle Obama in her convention speech, then she takes as her platform a crusade against bullying — when she is married to unquestionably the greatest cyber bully in political history — and now this!

“This morning, Mrs. Trump boarded Air Force One wearing a pair of towering pointy-toed snakeskin heels better suited to a shopping afternoon on Madison Avenue or a girls’ luncheon at La Grenouille.

“While the nation is riveted by images of thousands of Texans wading with their possessions, their pets, their kids, in chest-high water, desperately seeking refuge; while a government official recommend that those who insist on sheltering in place write their names and social security numbers on their arms, Melania Trump is heading to visit them in footwear that is a challenge to walk in on dry land.”

Oh, Melania! How insensitive you are.

Thankfully, there were some sane voices out there, including (surprisingly) Trevor Noah, who rightly asked, “Who cares?” He noted that the same day Melania visited Texas, North Korea launched a missile over Japan. “But, he said, “people weren’t talking about the nuclear missile that Kim Jong Un tested, because Melania Trump apparently did something much worse. She went to Houston wearing high heels.”

Over at the National Review, Tiana Lowe pointed out the “contrast between the media’s treatment of Michelle Obama and Melania Trump.”

And she noted that it wasn’t just Vogue that went after Melania, writing, “The first lady’s shoes, described by Vogue’s Lynn Yaeger as “better suited to a shopping afternoon on Madison Avenue or a girls’ luncheon at La Grenouille,” were met with breathless shock and condemnation from not just the usual outrage brigade led by Chelsea Handler and the like, but also by Politico, the Hollywood Reporter and CNN.

“How, oh how could Melania make as egregious a faux pas as to walk in Washington, D.C., in shoes that have been an unofficial part of the first-lady uniform for the past half century?”

At the Hill, Chelse Samelson stated that “criticizing the first lady for her pre-flight footwear and trying to tie her shoes to her level of compassion and concern represents a dismal new low for both feminists and the left.”

Who knew that Melania’s choice of footwear would reveal so much? She obviously accomplished more than she planned.

‘Ah, Shut Up’: Grumblings About the News