Little-known challenger Kelli Ward is virtually tied with Sen. John McCain in polls, and now McCain is manufacturing controversies about her. 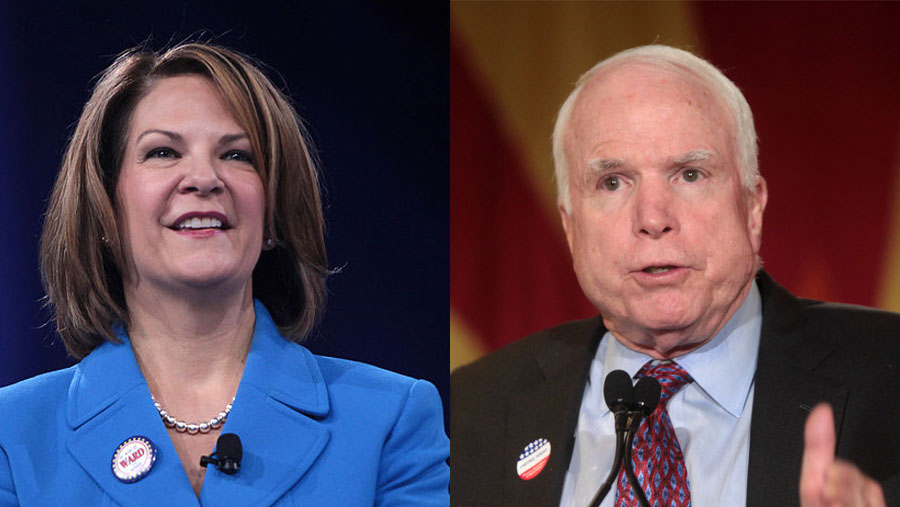 Kelli Ward, a conservative state legislator and physician challenging five-term senator John McCain in the Republican primary, has little statewide name recognition — but McCain is so unpopular she is nevertheless virtually tied with him in polls. She has her work cut out for her though. McCain is spending millions to defeat her, and stooping to misleading attack ads to get the job done.

I should note that I served as the director of social media on J. D. Hayworth’s unsuccessful campaign challenging McCain in 2010, and experienced McCain campaign attacks firsthand. My experience, and what Ward is enduring now, apparently are not out of the ordinary. A couple of prominent Arizona politicians have told me they do not dare run against him because they do not want to put themselves and their families through the inevitable smears.

The McCain campaign bought a barrage of ads in late May associating Ward with the chemtrails conspiracy theory, the unproven notion that there “are long-lasting trails left in the sky by high-flying aircraft consisting of chemical or biological agents deliberately sprayed for sinister purposes undisclosed to the general public.” McCain’s campaign, using a technique called ad remarketing, got the “Chemtrail Kelli” ads to pop up all over the internet, accusing her of being a conspiracy theorist and insisting she spent tax dollars entertaining chemtrails theories.

Ward has stated multiple times that she does not believe that chemtrails cause mysterious ailments, but was merely listening to constituents’ concerns once during a town hall she called in order to respond to their concerns. “They are concerned about our air and water, so I want ADEQ [the Arizona Department of Environmental Quality] to come out and reassure them,” she said. This a far cry from taking legislative action investigating chemtrails, as the ad implies.

It gets worse. Just last year McCain himself referred to the Environmental Protection Agency a constituent complaining about chemtrails harming her health — clearly treating the concern seriously. “I wish to bring to your attention a matter concerning [name deleted], who has encountered a problem,” McCain wrote. “Because the situation is under your jurisdiction, I am respectfully referring this matter to you for consideration. I feel that this issue would be better addressed by you and request that you respond directly to [name deleted].”

The Senator’s staff work in producing and mailing the letter, and any response from the EPA, would of course be done on the taxpayer dime. But don’t hold your breath for a McCain campaign admission that he’s also “entertained” the chemtrail conspiracy theory and spent tax dollars addressing it.

McCain has a low 81 lifetime rating from the American Conservative Union. However, with his millions, he has been able to make himself look like the conservative in his Senate primary races and his opponent as the moderate.

When McCain was running against Hayworth, who had a lifetime rating in Congress of 97, McCain convinced GOP voters that McCain was the real hawk on illegal immigration. Remember “Complete the Danged Fence?” McCain reportedly spent as much as $30 million (that he had raised for his presidential run; most Senate races raise only a few million) to run a barrage of ads on television with that spin. But when he defeated Hayworth, he did nothing about the border. I created this website while working on the J.D. Hayworth campaign against him, mocking his ad for not reflecting his real record on illegal immigration.

Ironically, McCain’s Democratic opponent, Rep. Ann Kirkpatrick, is running a campaign ad featuring parts of McCain’s Complete the Danged Fence ad, with Spanish subtitles in order to target the Latino community. According to The Hill, the McCain campaign tried to get it — his own ad — pulled from YouTube after the Kirkpatrick campaign had uploaded it with the Spanish subtitles.

Congressional insiders tell me McCain is not going to win reelection. The only incumbent members of Congress who poll this low at this point in the race are ones who have been seriously damaged by a scandal, and end up losing. The question is, will it be Ward who defeats him or Kirkpatrick?