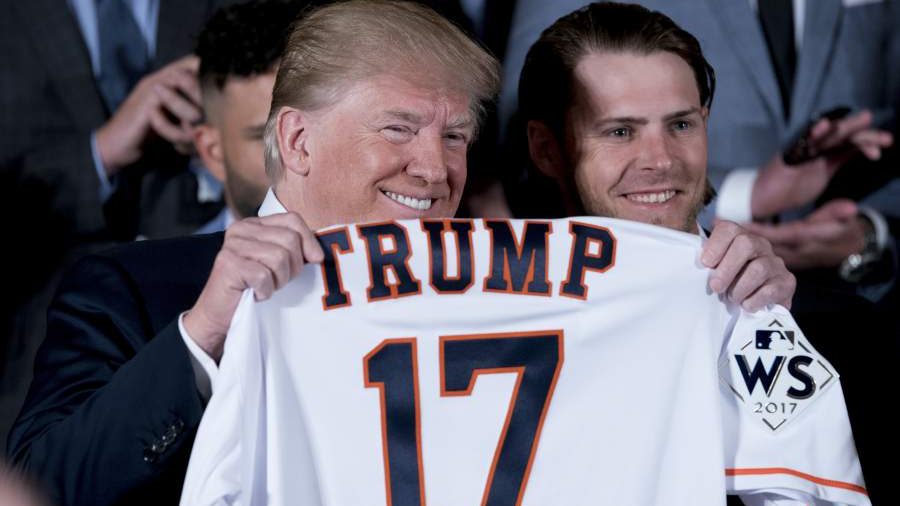 President Donald Trump poses for photographs as Houston Astros' Josh Reddick, right, presents him with a jersey during a ceremony in the East Room of the White House in Washington, Monday, March 12, 2018, where he honored the World Series Champion Houston Astros for their 2017 World Series victory.

Who or what is responsible for progressives’ aggressive attack on common sense ideas? Even center-right thinkers like the New York Times’ David Brooks are noticing the new wartime tactics.

Republicans had hoped these shock and awe attacks would be confined to gay issues. But success breeds imitators. These war tactics give progressives control over the Republican agenda. So they are migrating to other issues. Cue Democrats’ attack on the NRA, followed by Hollywood’s ritual two-minute anti-NRA hates. Then the corporations pile on NRA members. Each phase means more mainstream anti-NRA stories, more late-night comics, the next round of Hollywood tweeting, the next corporate punishments.

Clearly, something big is happening that Republicans and conservatives have no clue how to deal with.

So it is good that David Brooks penned an extremely important column on the left’s culture war tactics. He’s right: These tactics work. Brooks points to just a few of several common-sense ideas that can now end your career: Men and women are different. Marriage is between a man and a woman. Affirmative action is wrong. “Only women can have babies” is the new racism.

Brooks and other centrists on the right and left are concerned. Good. But there is one flaw in their analyses. These tactics are not new. The process has been unfolding for the last decade. Brooks is wrong about one big thing: Trump did not make the left go crazy.

Trump: The Response, Not the Cause

As I have argued here and here, Donald Trump is best seen as the response to this delegitimization process — certainly not as its cause. The reason “respectable” mainstream conservatives are respectable is precisely because when the left attacked Trump they played dead or played along. They didn’t stand up, and they didn’t push back.

Indeed, unwittingly, Brooks himself engages in such delegitimization when he accuses Trump of “racial prejudices.” For years “racism” has been a club used to silence people and ideas. Racism is ugly and wrong. But the left now calls anyone racist who wants to discuss vetting immigrants from Muslim-majority countries, ending illegal immigration, increasing border security, or who opposes tearing down historic monuments and renaming beloved football teams.

Donald Trump’s appeal comes precisely from his refusal to bow down to progressive elites’ self-imposed moral authority on hate.

Donald Trump’s appeal comes precisely from his refusal to bow down to progressive elites’ self-imposed moral authority on hate. This explains his attacks on the “fake news” media, the NFL, and deep-state cliques within the FBI and DOJ. Rather than accept the left as the cultural arbiters, Trump confronted it. Progressive hates President Trump precisely because he contests their moral authority. He exposes PC as a club used to silence decent people for having reasonable concerns. These same decent people responded in the only way they could: they voted for President Trump.

Mainstream Conservatives Are Missing It

The left’s culture war has successfully shut up Republicans on most cultural issues, except one: abortion. Over the last decade, pro-lifers have gone on offense and begun to defeat those who support this barbaric procedure. And they continue to gain ground. Why? Because pro-lifers fight hard and publicly, in politics as well as policy.

President Trump won in large part because he stood up for ordinary Americans against the left’s hate machine. Trump understands this. The left also understands this; that is why they hate Trump so much.

The only ones who still don’t have a clue are “mainstream conservatives.”