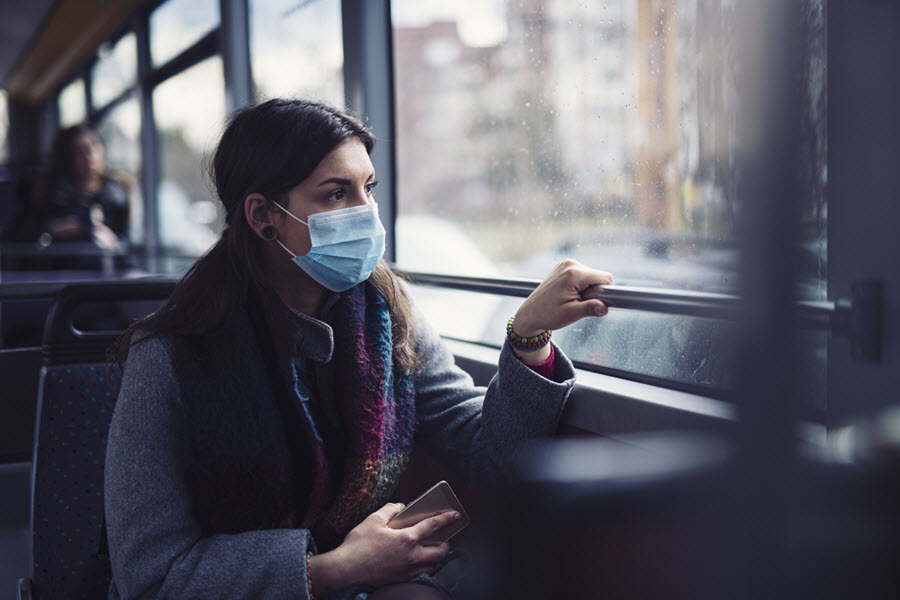 As a frequent flyer, I was thrilled to hear the news that a federal judge had overturned the CDC’s travel mask mandate. Many others were thrilled as well, as evidenced by videos showing both airline passengers and flight attendants casting off their masks with glee. Free at last!

But not everyone is happy with this decision — and I’m not just talking about government bureaucrats. Instead, there are individual Americans, from other frequent flyers to stay-at-home moms, who want to see the mandate extended.

Why? For the most part, it can be explained by one word: fear.

Desire for Mask Mandates is Motivated by Fear

Fear that COVID will be more easily transmitted.

Fear that a family member or friend will get sick or even die.

Fear that they themselves could be next.

Fear that the pandemic will bounce back.

To be sure, there are times when that kind of fear is warranted. (How would you feel if several kids on your daughter’s soccer team suddenly contracted Ebola?)

Today, … millions of people around the world have been held in slavery by their fear of death, afraid to violate their country’s lockdowns and mandates in the least.

And personally, I have no issue with anyone who chooses to wear a mask, either for their own safety or the safety of others, even if I question the mask’s efficacy.

Each of us must make our own choices, and for some people who are especially prone to catching viruses or those with compromised immune systems, if they choose to wear a mask, so be it. I do not judge them or belittle them or criticize them.

And I certainly do not minimize how deadly COVID was, having lost a number of good friends to the virus while spending a day in the hospital myself.

The problem is that there is now a massive amount of empirical data showing that the masks did virtually nothing to stop the spread of COVID, as illustrated by a graph produced by Ian Miller, author of the book Unmasked: The Global Failure of COVID Mask Mandates.

Commenting on the data presented in this graph, which “tracks the results of a natural experiment that occurred nationwide during the pandemic,” John Tierney noted that “you find that the mask mandates made zero difference.”

Eleven states never mandated masks, while the other 39 states enforced mandates. The mandates typically began early in the pandemic in 2020 and remained until at least the summer of 2021, with some extending into 2022. The black line on the graph shows the weekly rate of Covid cases in all the states with mask mandates that week, while the orange line shows the rate in all the states without mandates.

As you can see from the lines’ similar trajectories, the mask mandates hardly controlled the virus.

(Miller found similar results when comparing the effectiveness of the masks in Finland and Sweden, illustrating the data with another telling graph.)

When It Feels Wrong to Not Wear a Mask

The pandemic has eased, but not the compulsion of many Americans to cover their faces. Fully vaccinated adults are still wearing masks on their solitary walks outdoors, and officials have been enforcing mask mandates on airline passengers and on some city-dwellers and students. … Maskaholics in the press are calling for permanent masking on trains, planes, and buses. High school students in Seattle staged a protest demanding that a mask mandate be reinstated, and psychologists now deal with the anxieties of children who don’t want their classmates to see their faces. They’re suffering from “mask dependency,” as this psychological affliction is termed in Japan, where a long tradition of mask-wearing during flu season has left some individuals afraid at any time to expose their faces in public.

Of course, we can presume that the vast majority of everyday people wanting to extend the mask mandates (derogatorily called “maskaholics” by Tierney), genuinely believe that wearing masks saves lives. And they personally feel safer when they and others are fully masked.

But the fact remains that the scientific data does not support this (especially with the types of masks that most Americans have been wearing). And that means that the primary driving force behind these pro-mask sentiments is fear.

Again, we’re not talking about those in government who might want to use the masks as a means of controlling the society. We’re talking about your colleague at work or your neighbor. They have been influenced by fear, illustrating just how much control can be gained through it.

The Power of Fear to Control Behavior, Despite the Science

That’s how captors often control their captives: “If you try to escape, I will kill your family.”

That’s how dictatorial governments keep their people in check: “The enemy is out there trying to destroy you! We are your only hope! Without us, you would be dead!” (Think Orwell’s 1984 and today’s North Korea.)

That’s how heavy-handed religious groups control the activities of their people: “The only safe place for you is with us! Go out there, and you’re as good as dead.”

Indeed, one of the most powerful fears is the fear of death, as noted in the New Testament Letter to the Hebrews. There, it states, “Since the children have flesh and blood [speaking of us humans], [Jesus] too shared in their humanity so that by his death he might break the power of him who holds the power of death—that is, the devil—and free those who all their lives were held in slavery by their fear of death” (Hebrews 2:14-15).

Motivated by Truth, or Enslaved by Fear of Death?

Today, in a very different way, millions of people around the world have been held in slavery by their fear of death, afraid to violate their country’s lockdowns and mandates in the least. “Go outside without a mask, and you’re as good as dead!”

Without demeaning those who choose to continue to wear masks, let’s make this a teachable moment for ourselves. In the years ahead, we will see this again, only probably far worse. Will we be moved by science and facts and reason, or by fear?

From ‘Let Them Eat Cake’ to ‘Let Them Wear Masks’