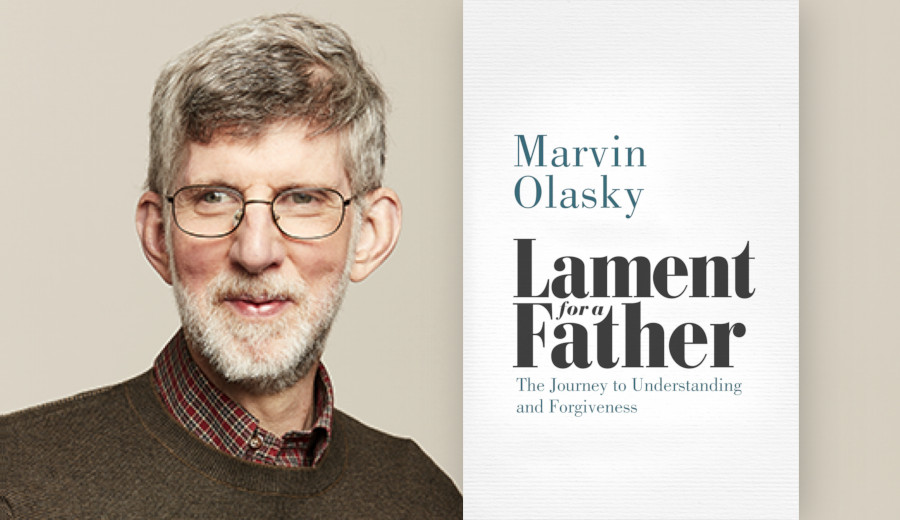 Why do sons write books about their fathers? Perhaps it’s because they feel a need to figure out the guy who sired their existence. If they’re like Marvin Olasky, the eminent public intellectual who edits World magazine, the act of writing promises to make someone distant and mysterious “come alive.” Maybe writing is also a way to give — or accept — forgiveness for conflicts that long have gone unresolved.

In Lament for a Father (P&R Publishing, 2021), Olasky departs from his usual principled detachment and public policy style. Instead, he expresses the grief that he experienced growing up (and expects that others have done, also) with a father who was cold and unresponsive. Even in adulthood, when his father was dying of cancer, Olasky reports that he could not get far into a father/son discussion. He now wishes he had tried harder, and urges other adult children, “Don’t take no for a final answer.”

It’s challenging to have a famous father. And many sons, especially, feel the pain of not measuring up. Occasionally one, like John Eisenhower, who wrote intelligent and revealing accounts of his father, Ike, the General and President, doesn’t let his own ego get in his way. Others shrink into disappointment.

The problem for Marvin Olasky was different. His father, surely in his own eyes, was a failure.

Eli Olasky was the son of a Jewish immigrant who had been brutalized by the Cossacks in Eastern Europe before making his way to America and, then, growing a modest business selling mattresses near Boston. Young, eager Eli grew up very Jewish; indeed, he was a serious achiever in Judaic studies.

He served in the Army in Europe in World War II (which he would not talk about), got into Harvard and did quite well there. Unfortunately, he also lost his faith in that great secular university. The loss blighted his future. His professional tragedy was that the only field in which he could prosper — Judaic studies — was one from which he emotionally was alienated. As his son came to understand, his life thereafter was stunted and embittered.

Marvin’s mother, meanwhile, longed for the hopes she saw in Eli in his youth. Thus, she was persistently disappointed. That left son Marvin largely to himself. As a college student he became the kind of reflexive left-winger that flourished in the ‘60s. At the University of Michigan, by 1973, he was “a graduate school communist, winning compliments from professors who relished my Marxist analyses.”

But then, in one of the strangest conversion experiences imaginable, Marvin, the student of Russian philosophy, picked up a copy of Vladimir Lenin’s essay, “Socialism and Religion,” and got lost in it. Instead of cheering Lenin on, though, he found himself meditating for a change about faith, not Marx. And he was perplexed. Sometime later, he picked up a copy of the New Testament — in Russian! — and read it, a Russian/English dictionary at hand. Such was the unlikely making of a convert.

Marvin Olasky in years thereafter became a spirited exponent of the goodness of God and the promise of redemption through Jesus Christ. His books have informed and inspired a couple of generations now. His ideas, among other things, have helped political leaders think through such tough topics as how to make Christ’s preference for the poor a reality in ways that help, rather than addict, the recipients of government concern.

So, now he turns back to his own life, and to his father’s. He does not spare himself from analysis. “Scapegoating is an occupational hazard for writers of family history,” he warns in Lament. “It’s easy to blame parents. I understand more about my father, now that I know about his experiences. … I understand my mother now.”

Why, Marvin asks himself now, “did I have so little interest in seeing my parents not primarily as people to meet my needs (or not) but as individuals with their own struggles?”

It turned out, for example, that the taciturn father who would not talk about his service in World War II had witnessed the liberation of the concentration camps. For a Jew it was especially horrible. He may have wanted to spare his son an account of that experience.

Why, Marvin asks himself now, “did I have so little interest in seeing my parents not primarily as people to meet my needs (or not) but as individuals with their own struggles?”

One of those struggles for his father, he concludes, was to keep from infecting his children with what had become for himself the “virus of pessimism.” He also wanted them to have the freedom in their lives that he felt had withered away in his own. “I belatedly thank him for that,” says Marvin.

“He was wounded, as was my mother, as was her father, as were the Cossacks, as is everyone. But no wound is too deep for Christ to heal.”

Marvin Olasky is not the only son to find ultimate fulfillment in a Heavenly Father.

Bruce Chapman chairs the board of Discovery Institute.