Planned Parenthood founder Margaret Sanger was a racist and a proponent of eugenics, the effort to breed a superior human race in the name of Darwinian biology.

Imagine if Republican presidential candidate Jeb Bush and Speaker of the House John Boehner both accepted an award named for slave-owner and President of the Confederacy Jefferson Davis.

Imagine further that Jeb Bush enthusiastically defended his award by proclaiming: “I am really in awe of Jefferson Davis, and there are a lot of lessons we can learn from his life.”

The editorial pages of The New York Times and The Washington Post, not to mention the talking heads at MSNBC and CNN, would likely condemn Bush and Boehner as crypto-racists and insist they return — or trash — their awards.

Of course, neither Bush nor Boehner have really received a Jefferson Davis award to my knowledge.

But here is the kicker: Democratic presidential candidate Hillary Clinton and former speaker of the House Nancy Pelosi have received an award honoring a similarly unsavory person, and yet neither of them has been called to account by the establishment media.

Both Clinton and Pelosi are past recipients of the Margaret Sanger Award, named for the fanatical supporter of eugenics who founded Planned Parenthood. 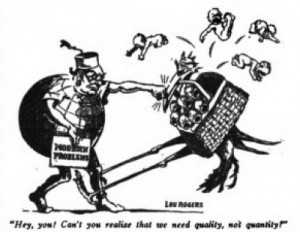 Eugenics was the effort to breed a superior human race in the name of Darwinian biology. Its supporters (which included the nation’s top evolutionary biologists) were terrified that society was destroying itself because it was preventing natural selection from killing off the poor, the sick and the handicapped, and from thinning down the “inferior races.”

Far from being embarrassed at receiving an award named for Sanger, Hillary Clinton expressed effusive praise of Sanger at the award ceremony, saying, “I am really in awe of her, and there are a lot of lessons that we can learn from her life.”

Planned Parenthood continues to be in the news for undercover videos showing that some of its clinics traffic in the body parts of aborted babies. As gruesome as the current controversy is, the callous attitude toward the value of human life displayed in the videos is pretty much in line with the views of the organization’s founder.

Although Sanger is depicted today by her defenders as a great humanitarian, Sanger herself warned of the “dangers inherent in the very idea of humanitarianism and altruism, dangers which have today produced their full harvest of human waste, of inequality and inefficiency.”

In Sanger’s view, humanitarianism threatened to swamp America with a tidal wave of the “feeble-minded.” As I explain in my book Darwin Day in America, feeblemindedness was an expansive category that included many people who today wouldn’t be considered mentally handicapped, including members of races (like blacks) considered by Darwinian biologists of the time to be “lower” on the evolutionary scale. “Feebleminded” persons could read. They could hold jobs. They could appear perfectly normal to everyone else. That’s why they were so dangerous according to eugenists. The feeble-minded could appear so ordinary that non-feebleminded persons might marry them and then spread their defective “germplasm” to the next generation.

Sanger branded the feeble-minded a “menace … to the race” and compared them to “weeds.” In her bestselling book The Pivot of Civilization, she wrote that “our eyes should be opened to the terrific cost to the community of this dead weight of human waste.”

Sanger and other eugenists argued that the feeble-minded must be prevented through compulsory sterilization from reproducing themselves.

So much for “freedom of choice” in having children.

Sanger prosecuted her crusade against the feeble-minded across America. At Vassar College in 1926, she spoke in apocalyptic terms about the ruinous costs to taxpayers of social spending to care for defectives, warning that “the American public is taxed, heavily taxed, to maintain an increasing race of morons, which threatens the very foundations of our civilization.” The same year she presented her message to a branch of the Ku Klux Klan in New Jersey. Her Klan talk was such a rousing success according to Sanger that afterward “a dozen invitations to speak to similar groups were proffered.”

Following World War II, the American crusade for sterilization in the name of eugenics largely moved underground after Americans learned of the horrors of the Nazi eugenics program. 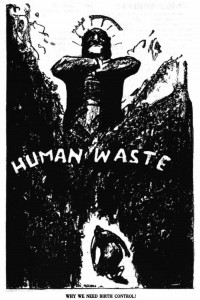 Sanger, however, remained uncowed. She continued to publicly advocate a national sterilization policy, although she lamented that because of the Nazis “the word has acquired some unpleasant connotations which it does not deserve.”

If you think Sanger’s views are completely out of sync with Planned Parenthood’s current leadership, consider the views of her grandson Alexander. Chair of the International Planned Parenthood Council, Alexander Sanger champions abortion as a practice that evolved through Darwinian natural selection to help humans survive.

“Humanity has evolved to take conscious control of reproduction and has done so in order to survive,” he declares. “… We cannot repeal the laws of natural selection. Nature does not let every life form survive. Humanity uniquely, and to its benefit, can exercise some dominion over this process.”

In other words, abortion allows us to eradicate some children so that other children might survive and the human species improve.

Margaret Sanger’s spirit of Social Darwinism is apparently alive and well among some of Planned Parenthood leaders of today.