What Do We Make of the Battle Between President Trump and the NFL?

I honestly believe those standing for patriotism and those kneeling for justice are seeking the same thing: an America that is truly great. 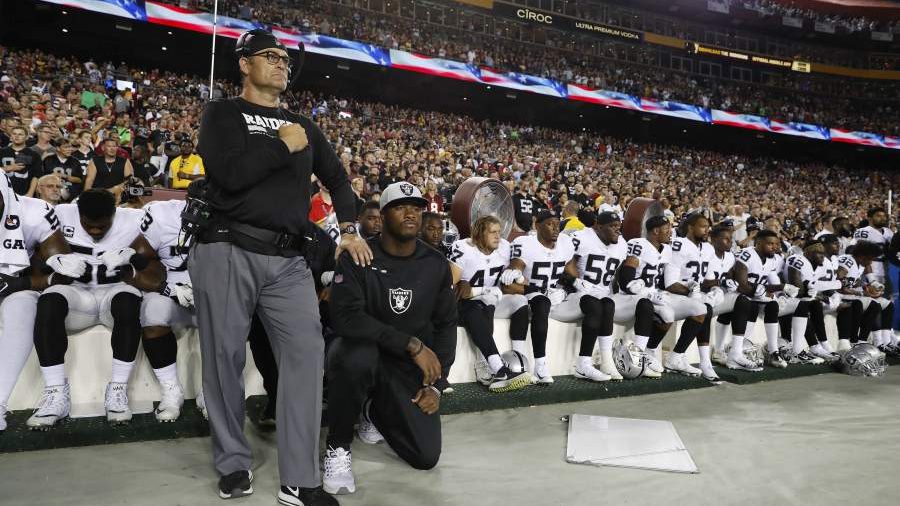 Some members of the Oakland Raiders kneel during the playing of the National Anthem before an NFL football game against the Washington Redskins in Landover, Md., Sunday, Sept. 24, 2017.

On Sunday evening, the lead story on the Huffington Post announced, “FOOTBALL TAKES THE KNEE.” The lead story on the Drudge Report proclaimed, “NFL TAKES KNEE.” Left and right both agreed on the major news of the day. Beyond that, there was little agreement to be found.

NFL owners expressed their solidarity with the protesters and their disappointment with President Trump.

In the words of NFL team owner (and previous Trump supporter) Robert Kraft, “Our players are intelligent, thoughtful and care deeply about our community and I support their right to peacefully affect social change and raise awareness in a manner that they feel is most impactful.”

In contrast, NASCAR owners made clear that such protests had no place in their sport.

When NASCAR team owner Richard Childress was asked, “What he would do if one of his employees protested during the anthem,” he replied, “Get you a ride on a Greyhound bus when the national anthem is over. I told them anyone who works for me should respect the country we live in. So many people gave their lives for it. This is America.”

Earlier in the week, the president had referred to NFL players who knelt in protest during the national anthem as SOBs who should be fired. He also uninvited the NBA’s Golden State Warriors to the White House. In response, LeBron James called President Trump a “bum.”

Is there a right and wrong in all this? How do we sort things out?

Kevin Durant commended the NFL players for bringing a unified and unifying message. He wrote: “I think our NFL players are doing a great job of sending a great message, and we stand behind them as athletes, and we support them as well.”

President Donald Trump called out former 49ers quarterback Colin Kapernick and other NFL players on Friday for protesting the national anthem, expressing what millions of football fans have already registered by tuning out.

But NFL officialdom, Hollywood, the mainstream media, and left-wingers in all quarters have distorted what he said, to the point where entire teams felt obligated to protest — something.

How, then, do we sort things out? Is there really a right side and a wrong side?

Seeking Clarity For Both Sides

Here are 6 points to consider (with the hope of bringing some clarity and with the risk of getting everyone mad at me):

1) The American flag is associated with sacrifices made for our national freedom, and it represents the best of our nation. Therefore, protesting during the national anthem should be avoided since it is perceived as unpatriotic.

It would have been better if Colin Kaepernick had found a better way to express his concerns about alleged social injustice.

It’s true that he launched a national movement of sorts. But his actions (and those of others in past weeks) drew more attention to the man than to the message. He brought more division than awareness.

2) If we want to celebrate America’s greatness, we can’t ignore America’s faults.

I agree with those who blame President Obama’s identity politics for much of the racial division in our country today. But I also agree with those who say that there are systemic problems in our justice system, with rich and poor not being treated equally. (And in many cases, blacks and white not receiving equal treatment.)

We can stand for patriotism and justice together. Don’t they go hand in hand? Don’t they support and complement each other?

But the ultimate issues here are not black and white issues, unless we want to claim that no blacks are patriotic or that no whites care about social justice. To make this into a race debate is to play into the hands of the race baiters.

Speaking to a conservative crowd in Alabama, President Trump knew he was on solid ground when he ripped into protesting NFL players, calling them “sons of  b—-s” who should be fired.

To paraphrase, How dare these spoiled brats despise the blood that was shed for their freedom!

In the end, what everyone desires is the same: to be treated with dignity and respect.

But as president, his role is not only to appeal to his base. He must also rally the nation around important causes. Comments like this have the opposite effect.

And when America’s Commander in Chief derides others in such terms, he only stokes the fires of division. He opens the door to outrageous comments like LeBron’s “bum” remark.

5) Most Americans want sports to be sports.

Why can’t athletes entertain their loyal fans while finding ways to raise awareness of important causes outside the playing field? They have instant media audiences. With their large followings, they could recruit rather than alienate.

6) Once again, this is about President Trump.

No political figure in memory has been able to drive the news like Donald Trump drives the news, shifting our attention from North Korea to the NFL in the blink of an eye. He even sets the parameters for debate and discussion, virtually setting up the talking points for both sides in advance.

What was a fairly minor issue in the NFL (in terms of numbers of players protesting) became a massive issue overnight. Now several hundred players are involved in making a statement one way or another. The response even trickled into a Major League Baseball game.

As one professional athlete commented to me in private, the protest on Sunday was a response to the president’s attack more than it was a statement about social justice issues.

Mr. Trump now has a fresh set of enemies. And unfortunately, the race card is being played against him.

But there’s a silver lining to all this. If our president recognizes the sacred trust he’s been given — he has been elected to lead the entire nation — he can use his marketing genius to unite, rather than divide.

Let’s pray that he’ll find a way to tweet constructively rather than destructively. (I know that’s a tall order, but that’s why we pray!) Let’s pray that those who oppose him would take the olive branch and put their own weapons down.

I honestly believe that those standing for patriotism and those taking a knee for justice are seeking the same thing: an America that is truly great. In the end, what everyone desires is the same: to be treated with dignity and respect.

If each of us acted that way today, treating with dignity and respect even those we differ with, we could start a movement of our own. Shall we?