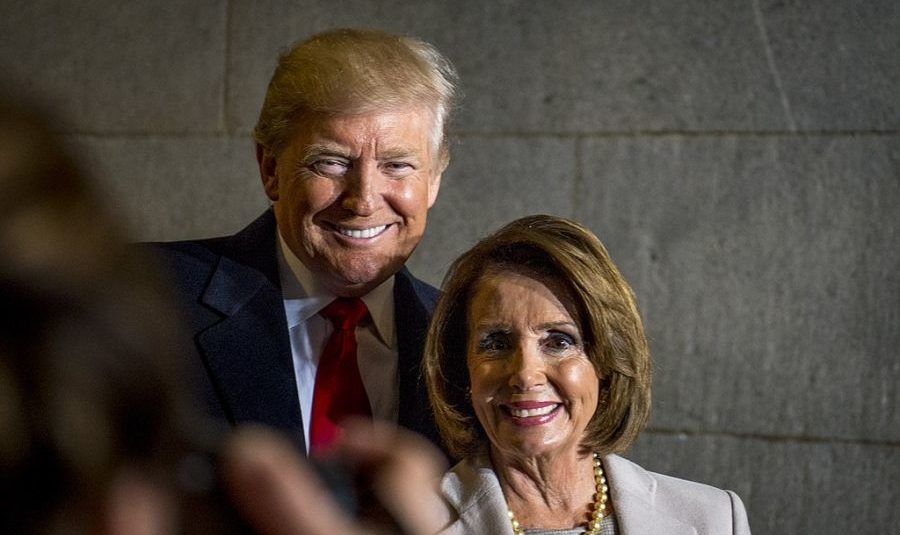 Donald Trump and Nancy Pelosi are all smiles on Inauguration Day, 2017. Can they ever forgive each other and smile together again?

Jesus taught it. Paul reaffirmed it. And neither said their teaching was optional for Christians. Instead, God Himself commands us, His children, to love our enemies and to bless those who curse us.

In the words of Jesus;

“You have heard that it was said, ‘Love your neighbor and hate your enemy.’ But I tell you, love your enemies and pray for those who persecute you, that you may be children of your Father in heaven. He causes his sun to rise on the evil and the good, and sends rain on the righteous and the unrighteous. If you love those who love you, what reward will you get? Are not even the tax collectors doing that? And if you greet only your own people, what are you doing more than others? Do not even pagans do that? Be perfect, therefore, as your heavenly Father is perfect” (Matthew 5:43–48).

In the words of Paul:

“Bless those who persecute you; bless and do not curse. . . . Do not repay anyone evil for evil. Be careful to do what is right in the eyes of everyone. If it is possible, as far as it depends on you, live at peace with everyone. Do not take revenge, my dear friends, but leave room for God’s wrath, for it is written: ‘It is mine to avenge; I will repay,’ says the Lord. On the contrary: ‘If your enemy is hungry, feed him; if he is thirsty, give him something to drink. In doing this, you will heap burning coals on his head.’ Do not be overcome by evil, but overcome evil with good” (Romans 12:14, 17–21).

To be sure, this is not talking about how our country’s military should respond to a foreign invader. Nor is it telling a husband and father what to do if a serial killer breaks into his home, intent on killing his wife and children.

These teachings refer to our interpersonal relationships. To our attitudes. To our responses.

Ethics at a Higher Level

But you can rebuke someone while having great love for them at the same time.

You can even want justice to be done while having great love for the criminal justly sentenced for his crime.

This is where the rubber meets the road. It is not easy to love people whom you think have wronged you. To the contrary, it is totally unnatural to love them. “Lord, You’re telling me I’m supposed to love them?”

In short, the command to love our enemies does not call on us to compromise our ethics. It calls on us to take our ethics to a higher level, hating evil to the point that we refuse to be corrupted by it.

Trump Expresses the Difficulty in Loving Your Enemies

At the recent National Prayer Breakfast, “Arthur Brooks, a Harvard professor and president of a conservative think tank, had decried a ‘crisis of contempt and polarization’ and urged his listeners to ‘love your enemies.’”

In response, President Trump remarked, “I don’t know if I agree with you,” adding, “I don’t like people who use their faith as justification for doing what they know is wrong.” And, the president continued, “Nor do I like people who say, ‘I pray for you’ when you know that is not so.”

On the one hand, I commend Trump’s honesty.

He openly questioned what Prof. Brooks had said rather than put on a religious show. And he openly admitted his struggles, saying, “I’m sorry. I apologize. I’m trying to learn. It’s not easy. When they impeach you for nothing and then you’re supposed to like them, it’s not easy folks. I do my best.”

But this is where the rubber meets the road. It is not easy to love people whom you think have wronged you. To the contrary, it is totally unnatural to love them. “Lord, You’re telling me I’m supposed to love them?”

And in doing so, He set an example for each of us. As Peter taught, “To this you were called, because Christ suffered for you, leaving you an example, that you should follow in his steps. ‘He committed no sin, and no deceit was found in his mouth.’ When they hurled their insults at him, he did not retaliate; when he suffered, he made no threats. Instead, he entrusted himself to him who judges justly” (1 Peter 2:21–23).

Yes, Jesus left us an example to follow, showing us the redemptive power of all-consuming love. It turns your enemies into your most loyal friends!

This has nothing to do with liking those who hurt you or attack you. Liking has to do with personal preferences. Loving has to do with truly desiring what is best for others. And true love will make personal sacrifices for the well-being of others, even of one’s enemies.

The Revolution of Love

As noted by H. S. Vigeveno in his book Jesus the Revolutionary, “Our world has witnessed many a revolution, but none as effective as the one that divided history into B.C. and A.D. Every revolution involves the shedding of blood. So did this one. Not as much blood, perhaps, but the quality of the One far outweighs the quantity of others. Revolutionary, indeed, this mission, to begin with a cross and sway the whole world through suffering love. Revolutionary to build a Church on the sacrifice that offers man forgiveness and atonement with God.”

How remarkable. That is the power of the cross.

Not surprisingly, shortly after the Prayer Breakfast, President Trump was on the warpath, lashing out at those who sought to remove him from office. And I can understand his attitudes and his actions.

After all, from his perspective, he, his family and his staff have been the victim of unjust attacks for more than three straight years. This includes the constant vilification of the leftwing media. The unrelenting, often vicious mockery of Hollywood celebrities. The wiretapping of his campaign. The unjust attempts to remove him from office with the Mueller investigation and the impeachment trial. And more.

Yes, from a human perspective it is totally understandable that he not only took a victory lap – who can blame him for that? – but that he went on the attack as well, pulling no punches.

But just think of how transformative it would have been had he said, “I hate the fact that the country is so divided, and I understand I have been a big part of that division. But today, I choose not to retaliate. It’s true that I have been acquitted, and I believe that justice has been done. But I choose to forgive those who sought to remove me from office. And I call on my political enemies and my enemies in the media to work together for the good of our country. I will lead the way.”

If others want to stew in their hatred, let them. We will step higher.

My Stream colleague Al Perrotta put it so well just a few days back, making this brilliant appeal to the president:

“The builder in you knows how this works. Like you did with the Old Post Office Building across from the White House, you’ve done the demo, now comes the beautiful remodel.

“You’ve shown us the bloody, unbowed street fighter. Show us the ‘better angels of our nature.’

“Today, in this hour of political victory, show us the greatest victory is to love one another.

“May the grace and wisdom of God guide you.

Unfortunately, President Trump missed the first opportunity to do this in the aftermath of his acquittal. And many of us who voted for him have missed our opportunity as well, feeling nothing but loathing for the Democrats and their ilk. (I should also mention the Christians who show no love for the president and his allies. They, too, have chosen hatred over love.)

The good news is that today is a new day.

All of us can step higher. All of us can seek to heal rather than destroy. And all of us, without compromising our convictions or violating our ethics one iota, can choose to love our enemies, with the help of the Lord.