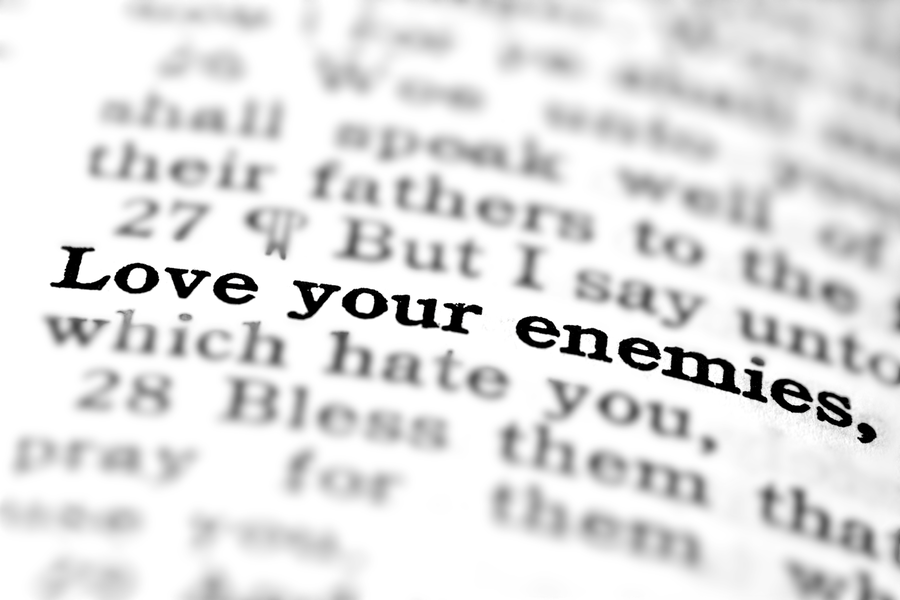 Some thoughtful pieces at The Stream recently have talked about the Christian duty to “love your enemy.” This in the context of President Trump’s press conference after the failed impeachment vote, and various remarks at the National Prayer Breakfast.

I’m no theologian, and we’re dealing with deep Christian mysteries here. So instead of trying to answer my colleagues, I’d like to raise some simple questions. In resolving those questions, I think we can find some helpful insights on a command that has challenged every Christian since the beginning.

From them, I think we’ll see that President Trump’s anger in the wake of his impeachment wasn’t actually so pagan, after all. What he needs is not a jeremiad by the likes of Soros-funded leftists like Jim Wallis. Nor Nancy Pelosi’s implausible, “Bless-your-heart!” promise of prayers, but some careful, sane explanation of Christian ethics from real believers. People who have struggled with Jesus’ words for decades — trying not to dilute them into meaninglessness, nor follow them in a foolish way that discredits the Gospel itself.

What Does It Even Mean to “Love Your Enemy”?

Let’s start with C.S. Lewis, and his classic The Four Loves. He observes that love in the Christian sense is something unique. Of course, it’s different from the “love” we might have for shrimp tacos, or backrubs. It’s different, too, from the romantic love that seeks a lifelong union. It’s different even from the noble love that is friendship, where we respond to what is uniquely loveable in a person. The love which Christ wants us to direct at each human being — even, though not especially, our enemies — is the love He has for us. What is “love” in that sense?

It must at least entail the following things:

This last proviso prevents Christian love for our enemies from collapsing into bland Buddhist indifference, sick emotional masochism, or stark, raving madness. I wonder if anyone has ever fully explained this essential distinction to President Trump. If not, I’m not surprised at his reaction during the National Prayer Breakfast to the facile use of “love your enemy.” He was just plain … confused. He honestly confessed that such talk didn’t make much sense to him. And barring this last proviso, it wouldn’t.

Allow me to illustrate. Rather than use the tired Nazi example, let’s pick something closer to home. Leading presidential candidate Pete Buttigieg used his power as mayor of South Bend to protect shady, unsafe, unsanitary abortion clinics from scrutiny by the state. He even moved to prevent pro-life pregnancy centers from opening anywhere near such dodgy clinics, to offer women better choices. One of the worst operators in South Bend over the years was Dr. Ulrich Klopfer. For 38 years he ran a squalid abortion business in South Bend, until his abuses came to light. As the Washington Free Beacon noted:

The clinic was shut down in 2016 after its owner, Dr. Ulrich Klopfer, was stripped of his medical license indefinitely. Klopfer was found to have violated state law nine times, including not reporting “an abortion on two girls under the age of 14” within the required timeline.

What else should we know about Klopfer? According to The Washington Examiner:

The preserved remains of more than 2,200 unborn children were found in the home of Dr. Ulrich Klopfer following his death on Sept. 3.

Family searching through the late doctor’s possessions discovered the remains in Klopfer’s Will County, Illinois, home and contacted authorities.

Let’s say you were a pro-life activist in Mayor Pete’s South Bend, Indiana. And you’d somehow discovered all these facts about Dr. Klopfer. In fact, you’d tried to open a pro-life pregnancy center right next to a squalid clinic like his, to save women from the tender mercies of doctors like him. And Mayor Pete used the force of law to stop you.

While Klopfer’s clinic was still open, what was the right way to love your enemy, Dr. Klopfer? Let’s go through the checklist.

In fact, the longer Dr. Klopfer is successful and happy, on his terms, the more likely he is to be damned. He may well be helping to damn many others. It’s your task, as a Christian who loves your enemy, to utterly defeat him. To expose him to the public. To get the police involved. If possible, to send him to prison for a very long time, where he can contemplate his crimes and perhaps repent. But at least you must try to stop him from doing harm.

The longer an evildoer is successful and happy, on his terms, the more likely he is to be damned. He may well be helping to damn many others. It’s your task, as a Christian who loves your enemy, to utterly defeat him.

So in light of this, you can, should, and must wage a public campaign against him as effectively as possible. The lives of unborn children depend on it. So might the fate of their mother’s souls. You’d be doing them no favors by pulling your punches out of a misguided notion of “Christian love.” In fact, you’d be failing to love Dr. Klopfer rightly either. The loving thing to do with an enemy like that would be to try to bring him down by any honest, non-violent means necessary.

Did Jesus Love the Pharisees?

Remember that Jesus loved the Pharisees even as He called them “whited sepulchers.” Peter loved the men who’d chosen Barabbas over his Master when he addressed them thus at the temple.

The God of Abraham and of Isaac and of Jacob, the God of our fathers, glorified his servant Jesus, whom you delivered up and denied in the presence of Pilate, when he had decided to release him. But you denied the Holy and Righteous One, and asked for a murderer to be granted to you, and killed the Author of life, whom God raised from the dead. To this we are witnesses. And his name, by faith in his name, has made this man strong whom you see and know; and the faith which is through Jesus has given the man this perfect health in the presence of you all.

And now, brethren, I know that you acted in ignorance, as did also your rulers. But what God foretold by the mouth of all the prophets, that his Christ should suffer, he thus fulfilled. Repent therefore, and turn again, that your sins may be blotted out … . (Acts 3: 14-19)

We must not declare peace too soon. Would it have been right for the Allies in 1944 to offer the Nazis forgiveness, and sign a peace treaty before invading Normandy? Should Lincoln have declared peace while the slaves were still in chains and our nation divided? Each action would have saved a lot of lives. You can imagine soft-hearted Christians making that argument. But they’d have been wrong. If we love our enemies, one of our duties is to defeat their schemes of evil. For their sake, and the innocents’.

Nor should Donald Trump relent in rooting out the men and women who spent the past three years trying to nullify the people’s vote by dishonest and ruthless means. It might not make these coup-plotters happy, the prospect of facing justice. They might be as sad as Dr. Klopfer was, when his clinic got closed. But it’s what a just leader must do, and it’s absolutely Christian to want to see that happen.

No, we don’t wish cancer, suicide, or damnation on these evildoers. But we want to see them defeated, our democracy defended, and wicked ideologies exposed for the hell-spawned lies that they are.