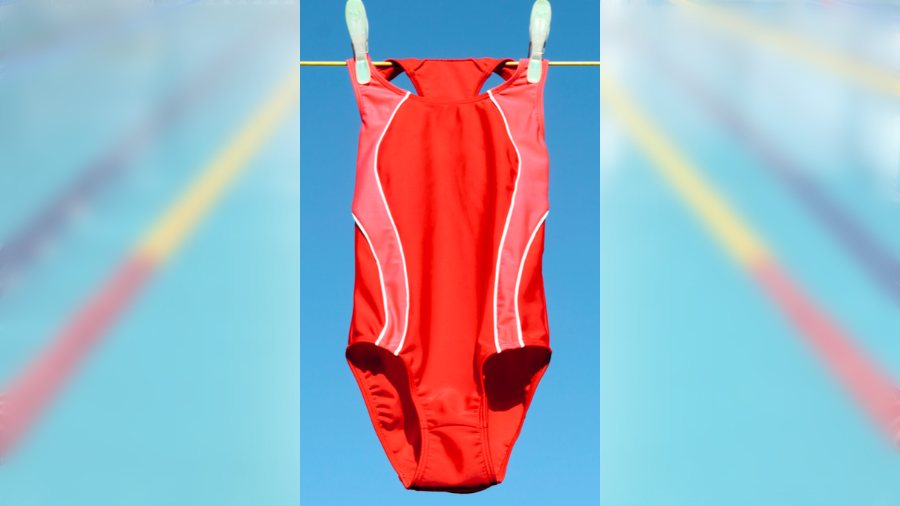 Once upon a time there was a little girl who loved to swim. Everyone cheered her on, especially a friend and national swimming champ she called “Grandma” because she was two years older.

On the younger girl’s birthday, Grandma gave her a red swimming suit that fit her so well she won her next four races — so she never swam in anything else. So she was always called Little Red Swimsuit. And she won the first round in her heat at an NCAA swimming competition in Atlanta, Georgia, competing against other girls. But Grandma lost her heat to a tall, strangely-shaped woman with a furry tail.

The next day her mother said, “Come, Little Red, here is a piece of cake and a bottle of wine. Take them to Grandma, and they will do her good. Walk directly to the pool, and do not stray from the path.”

Lessons From the Wolf

As Little Red passed through the forest, however, she noticed a cute schoolhouse. Outside it sat a wolf, teaching his class of lambs. Little Red did not know what a wicked creature he was, and was not at all afraid — he was a teacher, after all.

Biology is entirely imaginary, and human whim can make us whatever we wish to be, especially if we are born predators.

“Good day, Little Red Swimsuit,” said he. “Are you woke, yet? Do you understand the intersectional oppression of western society? And that gender is an artificial construct?”

“No, Mr. Wolf. I don’t know anything about inner opera sessions!”

“You don’t say? Thank you for informing me, Mr. Wolf.”

“But I am going to see Grandma, who lost her first race, and needs a bit of a pick-me-up.”

“Where is the race?”

“You see those oak trees with the hazelnut bushes under them? There’s a swimming pool behind them.”

The Crafty Wolf is a Predator

The wolf thought to himself, “What a nice mouthful! See if I can have both of them for lunch in that race, and the other girls, as well!” For wolves are naturally good at swimming. So he said, “See these books on Critical Theory? Why don’t you browse them for a while, and learn why sex and gender are oppressive constructs. You can listen to music and sing funny songs about drag queens. Everyone in Woke Forest is happy.”

Little Red Swimsuit raised her eyes and saw all the pretty woke people, and she began reading their blogs.

She finally arrived at the swimming pool and dressed for the finals. She looked into the second lane, where she thought Grandma would be. And there was the wolf, wearing Grandma’s swimsuit. After reading the woke literature, however, she was afraid to contradict the legend on his swimming suit, which read “Grandma.” For everyone knows that one is whatever one claims to be, and it is oppressive and old-fashioned to deny it.

“Oh, Grandma,” she stammered. “What broad shoulders you have! And how tall you have become!”

“The better to see you with, my dear,” replied the wolf.

“But Grandma, what a hairy chin you have!”

“The better to tickle you with, my dear.”

“Oh, but Grandma, what a flat chest you have!”

“The better to hug you with, my dear.”

“But Grandma, how high your testosterone count is!”

“The better to eat you up with, my dear!”

And scarcely had the wolf said this, than the gun sounded, and he swept the field in the 500 meter freestyle.

A huntsman came by, who worked for the NCAA, and whose job it was to make sure all races were held fairly, without skullduggery. But he had gone woke, too. And he said that all wolves everywhere now have the right to eat up little girls not only in swimming, but in all sports. And that it is intolerant and cruel to keep them out of locker rooms or pools. Because biology is entirely imaginary, and human whim can make us whatever we wish to be, especially if we are born predators.

And that is as far as we shall read tonight.