Technicians working at Planned Parenthood took fetal body parts even though mothers had refused consent, and asked for consent before mothers had decided to have an abortion. 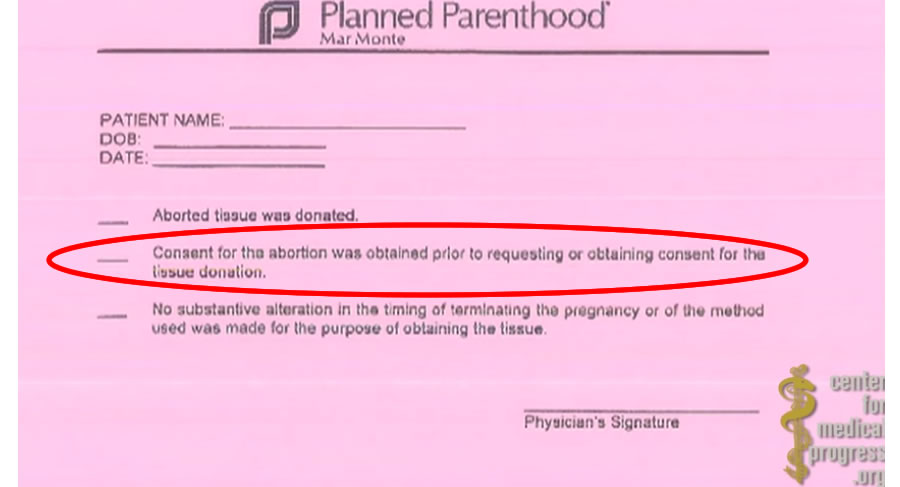 The latest Planned Parenthood video has just been released by the Center for Medical Progress, and it contains evidence of yet more laws being broken by the organization. This time, it’s informed consent. The National Institutes of Health Revitalization Act of 1993 prohibits the harvesting of fetal body parts without obtaining the consent of the mother. So far, Planned Parenthood has defended itself against the videos by saying its employees who were secretly taped were misunderstood. But how will it get around the testimony of a former worker who seems happy to testify in court against the organization?

Holly O’Donnell, a former StemExpress procurement technician who has become a whistleblower on the operation, explains in the video that it was common practice to take the fetal body parts without consent first.

The co-workers I had … they would not consent the donors.  If there was a higher gestation, and the technicians needed it, there were times they would just take what they want, and these mothers don’t know. There’s no way they would know.

She discusses an incident where a mother refused to give consent. One of her co-workers, Jessica, didn’t care that the mother had refused to sign, but took the fetus anyway.

O’Donnell also describes times when women would be asked for consent to take the fetus even before a pregnant mother had decided to have an abortion. The National Institutes of Health Revitalization Act of 1993 specifically prohibits this discussion until after a woman has decided to have an abortion: “The consent of the woman for the abortion was obtained prior to requesting or obtaining consent for a donation of the tissue for use in such research.” Section 112 of that Act imposes criminal penalties on the originating organization for “soliciting or receiving a directed donation.”

If a mother questioned whether she should go through with the abortion, O’Donnell, who described herself as pro-life, would discourage the mother from doing so. O’Donnell said she would get in trouble for it afterwards, “that was an opportunity you just missed” (emphasis added). O’Donnell explains, “I’m not gonna tell a girl to kill her baby so I can get money, and that’s what this company does.” She explains that her boss, Sarah, told her getting the blood and body parts was not an option, it was a mandatory part of the job.

She reveals yet another likely new violation of the law, as she says she was the only one in the clinic licensed to draw blood, but others still drew blood.

Sadly, the video footage shows the locations O’Donnell and her co-workers worked at are in rundown neighborhoods where many poor and minority women live. O’Donnell worked at a Planned Parenthood clinic in Fresno “that was in actually an alley.” By targeting minority women, there may be another constitutional claim against Planned Parenthood, namely, equal protection.

There may also be a civil racketeering (RICO) claim against Planned Parenthood and Stem Express. Although there are no laws restricting how much Stem Express can charge to resell the fetal parts to researchers, it was complicit with Planned Parenthood in earlier parts of the process where the law was broken. In order to be convicted of racketeering, an entity must have committed one of 35 federal crimes. Here, fraud or mail fraud may apply, since Planned Parenthood used the mail to deliver fetuses. This is ironic since RICO lawsuits have been brought against pro-life protesters.

There is already plenty of evidence in previous videos that Planned Parenthood is violating Section 112 of the The National Institutes of Health Revitalization Act of 1993, which imposes criminal penalties on the originating organization for selling fetal body parts for profit. How many more laws must be broken before Planned Parenthood before federal prosecutors act?