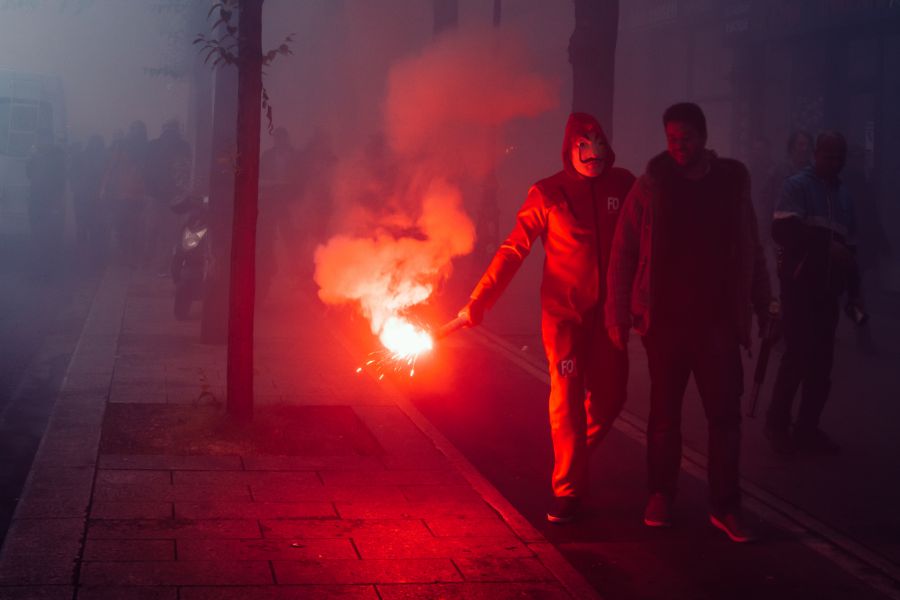 Something happens to people when they get pushed to the edges. And edgy people go to the edges on their own. Either way, those on the hard right and those on the hard left look and sound a lot alike. If you turned off the sound and didn’t read the signs, you couldn’t easily tell the difference.

They have the same sense of righteousness. The complete unshakable certainty. The feeling of moral superiority. The hatred for those on the other side, and the contempt for those in the middle. The belief that they’re smarter than the stupid sheeple, that they know the real truth everyone else refuses to see. The disregard for social norms like kindness and patience and the idea that good people can disagree.

The end justifies the means morality. The certainty that they’re the world’s last hope. The dehumanizing way they speak of others. The feeling that they give you that they’re just half an inch from violence, certainly verbal, but maybe physical.

A new study has found what most people knew: These hardcore leftists and rightists are almost the same kind of person. They don’t think or feel like the typical conservative or liberal. As my grandmother would have said, they’re just ugly.

The study, published in a journal called Helion, claimed that the personality traits called “the dark triad” predicted hard left and right politics. They measure Machiavellianism, narcissism, and psychopathy. In layman’s language: cold-blooded manipulativeness, self-absorption, and feeling nothing for other people. It also claimed that a sense of entitlement helped predict that kind of politics, though not as much as the Dark Triad.

The writers, Jordan Moss and Peter J. O’Connor, teach at the Queensland University of Technology in Australia. They make lots of qualifications and define their terms carefully, and if you’re really interested in the subject you’ll want to read the study itself.

Both politically correct groups “desire to avoid offense and avoid disadvantaging certain groups in society.” The PCLs want to remove social and emotional barriers. The PCAs want to secure physical and psychological safety. They seem more or less the same, except that PCAs believe “that aggression and force are appropriate methods to achieve ideological goals.” The ARs have “strong feelings of white identity, solidarity and a belief in white victimisation.”

The writers, I think, meant groups like Antifa (the PCA ones), The New York Times (the PCL), and groups like the Groypers, the Proud Boys, and the people that marched in Charlottesville (AR).

The Dark Triad traits predict authoritarian political correctness and alt-right attitudes. Psychopathy was the most important of the three for both PCAs and ARs. Narcissism predicted both, but was more significant for the ARs. A sense of entitlement also predicted the hardcore attitudes, especially for the PCAs.

The PCLs come out of the study looking good. I wish the writers had studied the conservative equivalent, who would probably also look good.

The study didn’t tell us anything many of us didn’t already know. But it does make clear something we don’t always see, especially when we look at our ideological allies who’ve gone farther than we will.

It plays against an assumption we tend to make about extremists, especially the extremists on our side. We assume they speak the angry way they do and even threaten violence because they care. Because they’re so passionate about their cause. Because they have no other outlet than extremism. They’re hot because they feel righteous anger.

The cultural left has long treated anger (leftist anger) as self-authenticating. It’s promoted “Days of rage” and made excuses for the most destructive protesters. Rioting is “the voice of the voiceless.” The Left takes the extremists’ anger as proof it’s right about things. Now parts of the right do the same thing. And some mainstream conservatives make the same claims about their extremism the Left has made about their extremists.

We tend to excuse our allies. The other guys create hatred and violence. Our guys just went too far. Understandable, though. They mean well. Who doesn’t admire someone who’s passionate for the truth? Who doesn’t feel a little guilty that he’s not out marching when his allies put their bodies on the line? And who doesn’t expect them to cool down and redirect their energies more usefully?

It’s Dark For a Reason

Many, though, want something other than the truth and they won’t cool down till they get what they want. The study shows that many extremists act as they do because they’re psychologically warped. The Dark Triad is called “dark” for a reason.

Don’t excuse them. Call them on the violence of their actions or their words, even if you generally agree with them. Anger doesn’t authenticate itself. It’s not in itself evidence of a properly directed passion and it’s not automatically righteous. As Jesus warned us, the mouth speaks what has filled the heart. Psychopathology, narcissism and entitlement fill some hearts, and we hear it in what they say and do.

David Mills is a senior editor of The Stream. He has been editor of Touchstone and executive editor of First Things. He edits the site Hour of Our Death and writes the monthly “Last Things” column for the New Oxford Review and a weekly column for the English Catholic Herald.