"NASCAR fans never forget that no matter who wins the race, what matters most is God, family and country," said President Trump. 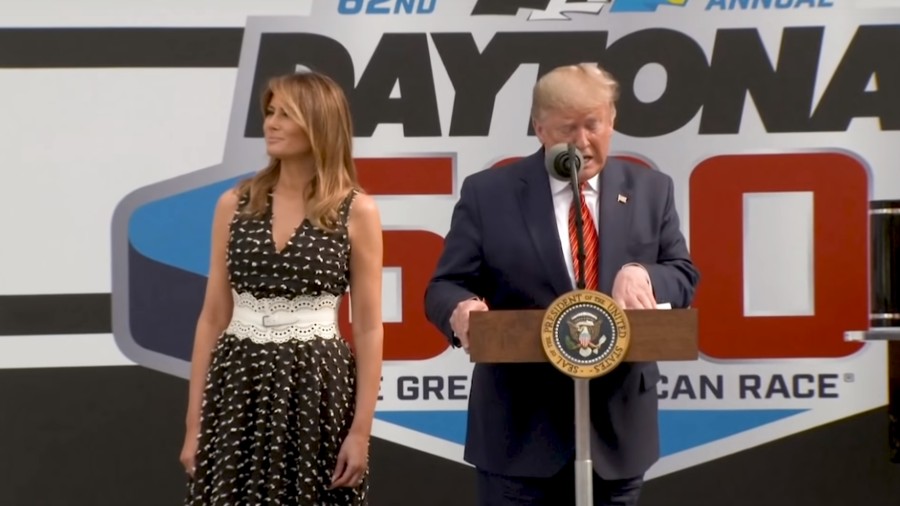 The Centers for Disease Control is grappling with a massive outbreak of Trump Derangement Syndrome among Democrats and the Mainstream Media following pre-race festivities on Sunday at the Daytona 500.

President Trump was named grand marshal of “The Great American Race” and his appearance sent leftists scampering to their designated safe spaces.

Tens of thousands of race fans cheered, “USA, USA” as Air Force One flew about 800 feet over the speedway as “America the Beautiful” played over the public address system.

When the president arrived he was greeted with spectators waving “Make America Great Again” flags and chants of “four more years.”

“It doesn’t get more American than this,” NASCAR driver Joey Logano said.

And then he did what no other sitting president has done — he took a lap around the track. “The Beast” was the official pace car of the race.

Among those breaking out into a flop-sweat was New York Times White House correspondent Maggie Haberman. She accused the president of “using the official apparatus of government for what appears to be a political event.”

It’s as if she’s already writing the first draft of another round of Articles of Impeachment: Abuse of the White House Motor Pool.

NBC White House Correspondent Kelly O’Donnell noted that the trip to Daytona was an “official White House event.” Meaning, that the president’s appearance and trip around the track in “The Beast,” was paid for by the “taxpayers.”

And as near as I could tell the American taxpayers overwhelmingly approved of the president’s visit.

So why were so many Pajama Boy Snowflakes and Mexican Man Shoe Feminists so bothered by the Daytona 500?

Could it be that the race started with an invocation that included a preacher praying in the name of Jesus? Or was it the fact that no one took a knee during the singing of the Star-Spangled Banner? Or maybe it was the display of so much red-blooded “toxic masculinity”?

I contend Ms. Haberman and Ms. O’Donnell were more upset with the people in the stands. President Trump explained why in his address to the fans.

“NASCAR fans never forget that no matter who wins the race, what matters most is God, family and country,” he declared.

The reason why Democrats and the Mainstream Media suffered a sudden onset of Trump Derangement Syndrome is because NASCAR values are the antithesis of everything the leftists stand for — freedom, liberty, patriotism.

“NASCAR fans never forget that no matter who wins the race, what matters most is God, family, and country!” – @realDonaldTrump #DAYTONA500pic.twitter.com/pUl6n67K7f

And if you’ve got a problem with that, might I kindly suggest you blow it out your tailpipe.