Hillary Clinton has almost as many racist supporters as Donald Trump, so why is there an inordinate focus on the multiple, strangely anonymous 'Alt-Right' accounts? 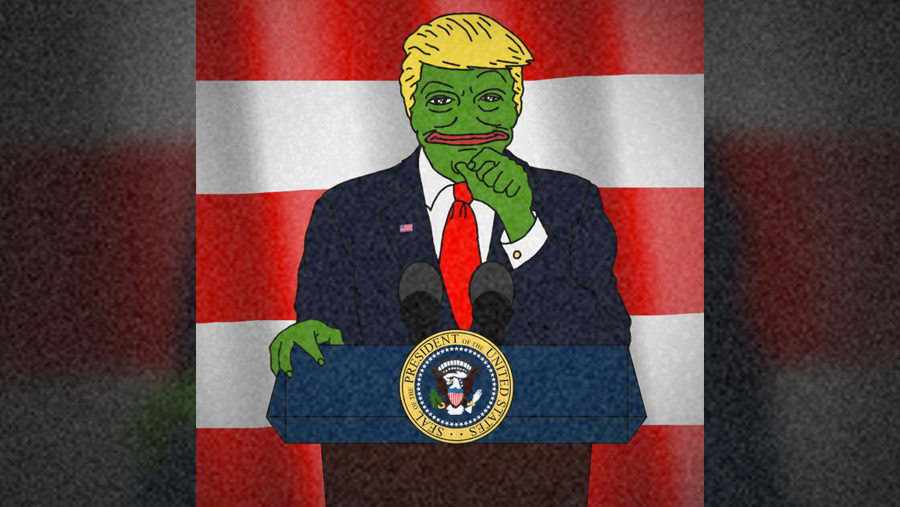 Donald Trump tweeted this image of Pepe the frog looking like himself last fall, before trolls created an association of the frog with white supremacy.

Both liberals and conservatives have been worrying that Donald Trump has a significant amount of support from the “Alt-Right,” a faction of conservatives who are heavily tuned into racial differences to the point of sounding racist. But who are these supporters?

I have about 9,000 Facebook friends and followers, mostly political folks on the right, and cannot identify a single one who is Alt-Right. I posted a query on my Facebook page asking if anyone identifies as Alt-Right, and no one responded affirmatively. I have over 17,000 followers on Twitter and I have never seen even one borderline racist comment from them either.

The left is straining to make a connection between the Alt-Right and Trump, despite the fact that Trump has disclaimed white supremacists who support him. They are promptly kicked to the curb if discovered officially connected to his presidential run.

In one of the most publicized stories, Trump delegate Lori Gayne from Illinois, who goes by the Twitter handle “white pride,” lost her credentials after a post on Facebook praising “brave snipers just waiting for some n—– to try something” at the convention.

So Where Are All These So-Called Racists on the Right?

There are a handful of small Alt-Right entities, such as Taki Mag, American Renaissance, National Policy Institute, VDare and most recently, IdentityEvropa (sic), which appears to consist of barely more than one person. The left eagerly writes volumes about this small group’s support of Trump.

Yet the left leaves out Clinton’s similar problem. A faction of racists on the left support her, and they were particularly anti-Semitic toward Bernie Sanders during the primaries, brazenly tweeting from their real accounts. A Reuter/Ipsos poll found that one-fifth of Clinton supporters believe blacks are less intelligent than whites, and one-quarter said that blacks are lazier than whites, among other things. KKK Grand Dragon Will Quigg endorsed Clinton over Trump. Two anonymous guys made up a story that Pepe the frog is the symbol of the Alt-Right movement. Pepe is (or was) a harmless, almost meaningless character created from a comic drawing by the artist Matt Furie, which became popular in memes on sites like Tumblr and 4chan.

The man behind the account that first presented Pepe as an Alt-Right symbol, has said he is not a white supremacist, and according to Lifezette, “has even admitted publicly to being a left-winger.” He told The Daily Caller,

I interspersed various nuggets of truth and exaggerated a lot of things, and sometimes outright lied — in the interest of making a journalist believe that online Trump supporters are largely a group of meme-jihadis who use a cartoon frog to push Nazi propaganda. … The idea that every major Trump supporter online is secretly a neo-Nazi, for one. I mean, it’s just not true. But it’s the kind of thing that a journalist will readily believe.

When it was modified to look like Trump last year, Trump naturally included the image in a tweet. The false white supremacist association took place after that, and this past week the Anti-Defamation League added the cartoon character to its hate symbols database.

Despite the fact the creators who set up the false association admitted they did it for illegitimate reasons, not because they are white supremacists or part of the Alt-Right, Clinton’s campaign assigned the blame to a “white supremacist” in a post on her website.

The Clinton campaign developed a pattern of creating fake accounts supporting her opponent during the primary. According to a post on Reddit by an alleged former paid “internet troll” for Clinton, the Clinton campaign instructed campaign workers to set up deceptive pro-Bernie Sanders accounts during the primary. The moderator of the Bernie Sanders for President Reddit page said they would then “have other elites/influencers quote tweet these fake accounts and say they are hurting Bernie’s brand” — similar to how the anonymous white supremacist accounts prompt top Republicans to denounce their association with Trump.  The Clinton SuperPac “Correct the Record” openly admitted a few months ago that it spent $1 million to hire supporters to create accounts for flooding the web and social media, and that “Lessons learned from online engagement with ‘Bernie Bros’ during the Democratic Primary will be applied to the rest of the primary season and general election.”1. Create fake accounts
2. Establish that they are Bernie supporters by making them tweet about Bernie
3. Harass journalists and influencers in their @ mentions
4. Have other elites/influencers quote tweet these fake accounts and say they are hurting Bernie’s brand
5. Pitch a story to The Atlantic about the phenomenon of “Bernie Bros”
6. Establish a narrative that Bernie’s supporters are all racist, sexist young males who harass people online.
7. Make it more difficult for Sanders to expand his coalition by tainting the view of said coalition for women, people of color, and anyone who just doesn’t like online harassment/bullying.

The website Rational Wiki, which prides itself on debunking the right wing, refers to the fake alt-right accounts as “deep cover liberals,” and the description sounds very similar to the anonymous Alt-Right accounts:

Anonymous accounts like this and this fit the description quite accurately.

The fake accounts cleverly attack mainstream conservatives, such as columnists for National Review, in order to divide the right. The other half of their strategy is to to put conservatives on the defensive, so they waste extra time refuting claims that they are the party of racists. Instead of proactively getting things done, conservatives are being distracted by these attacks. Although Clinton has plenty of real racists supporting her too, the left-leaning media mostly ignores them — try googling “racist Hillary Clinton supporters,” (six results) then google “racist Donald Trump supporters” (14,800 results).

This is just another tool the left uses to make the right look bad. As I’ve previously covered, the left is actively creating fake news sites with articles that mix racism and other offensive views with riled up conservative talk in order to try and trick conservatives into sharing the articles.

This is only the beginning. As the internet grows and changes, the left will come up with more fakery. Conservatives don’t have to lower themselves to the level of these dishonest tactics to win, but they must stay on top of it, expose it and be informed.