King Herod Wins and Wins … Until He Loses

It’s still Christmas, Christians. Yes, the tinsel is receding, and the lights are going out all across America, as the federal government gets back to its workaday business of threatening violence against its citizens. Yet Christmas continues. In the technical sense: For liturgical churches, the Christmas season will last for another month, until February 2. But we mean something else. Because January 6, the Epiphany, marks the Christmas that can’t be contained, and never quite ends.

Until the day the Magi saw Jesus, the birth of Jesus had been a strictly ethnic event, the coming of a king for a noble but isolated people, the one race whom God had chosen to groom as His own. Jewish shepherds had heard some angels speak to them in Aramaic, and gathered in a manger to mark the birth of a Jewish child to a Jewish virgin. Unusual, surely, but hardly of universal interest. Such portents happened from time to time, the soothsayers said.

What could this childbirth ever mean to the great races of man? Those teeming, booming breeds had slipped slowly further and further from  Eden’s monotheism, and the stern promptings of the Law written on their hearts, codified by Noah. Off they had wandered, to dis-hearten captives on pyramids, to declare whole nations “untouchable” thanks to “karma,” or watch the gladiators hack each other to the tinkle of feminine laughter. They gathered at sacred oak trees in the glum woods of the north, or lined up for temple prostitutes in oily Levantine temples. Some of them stewed in the Senatorial steambath talking wistfully of “virtue.” But none of them knew, and none was looking.

Except for these three. Should we think of them as scientists, as mystics, or as kings? The one thing they weren’t was “spiritual seekers,” who had read the first century’s version of Eat, Pray, Love and gone to resolve their midlife crises in some exotic locale. These were deadly serious men, who’d embarked on a perilous journey — the Middle East was as dangerous then as it is now, and apparently always will be — to search out a sign with universal significance. What exactly did they think it meant? Perhaps they expected to meet the next Alexander, who this time would cross the Ganges and sweep the steppes to the ends of the earth. We’ll never know.

But Herod knew. (And we know Herod’s thoughts because W.H. Auden recorded them, in his brilliant verse play For the Time Being: A Christmas Oratorio.) When the Magi naively dropped in at his palace to ask of the “new king’s birth,” whom they called “the Christ,” that crafty, paranoid political appointee nodded slowly and listened closely. He wasn’t a faithful Jew, but he’d learned the local ropes. He knew that his throne was phony, a silk glove for Rome’s iron fist. No Jews owed him their fealty. He was not of David’s house. His spies told him of whispers among the Zealots that the true line of royal blood still ran in places like David’s own Bethlehem. That thought had gnawed away at him, a threat too vague to be actionable. Till now.

And we know the rest of the story. The blood of infants, royal or not, was shed indiscriminately in every street and lane of Bethlehem. The mothers wailed and fathers fumed, but Herod knew that the place would simmer down: It was just one of those ordinary massacres, of the kind which Rome and its satraps knew were needed from time to time — as hygienic in purpose as the culling of worthless infants outside Rome’s walls. Herod was sure that he’d intercepted the threat, and slept easier that night. He had already murdered two of his own sons as potential rivals. What were a few dead baby Jews to trouble his conscience? But other nights, later nights, he must have awakened and wondered: Had he got them all? Had his agents been perfectly thorough?

It didn’t seem fair, that he should have to worry like this. He had been utterly, desperately ruthless. He had earned the right to a tranquil reign. What more could the dark gods who meddled with death and life expect from him? He had acted … like one of them.

And so the dark Prince of this World continues today. He hunts the innocent in the womb, and the Chaldeans and Copts in their dusty hamlets. He addles the minds of our wise men with ideologies, and scrambles the letters of the law writ on our hearts. He muddles the primal reality that is sex, and whispers that we may remake it. He grills the law books and tortures the lines of our Constitution, to find more pretexts for shutting down, silencing, confiscating, bankrupting, someday imprisoning the minions of that Infant, the one Who got away.

But that baby spark is now a wildfire that rages on each continent, and all Caesar’s men cannot staunch it, nor Herod’s tears drown it. 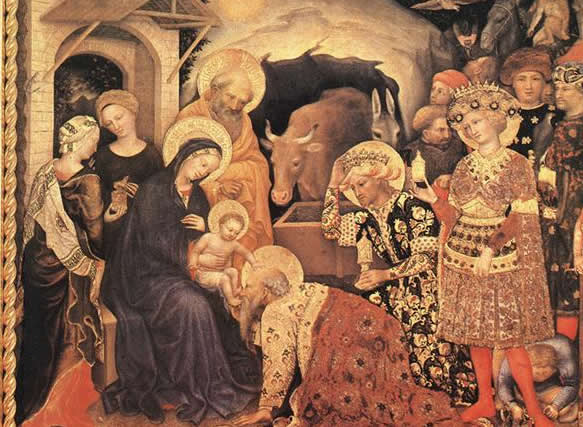