Others have contributed to the toxic atmosphere that provided the backdrop for her misdeed. 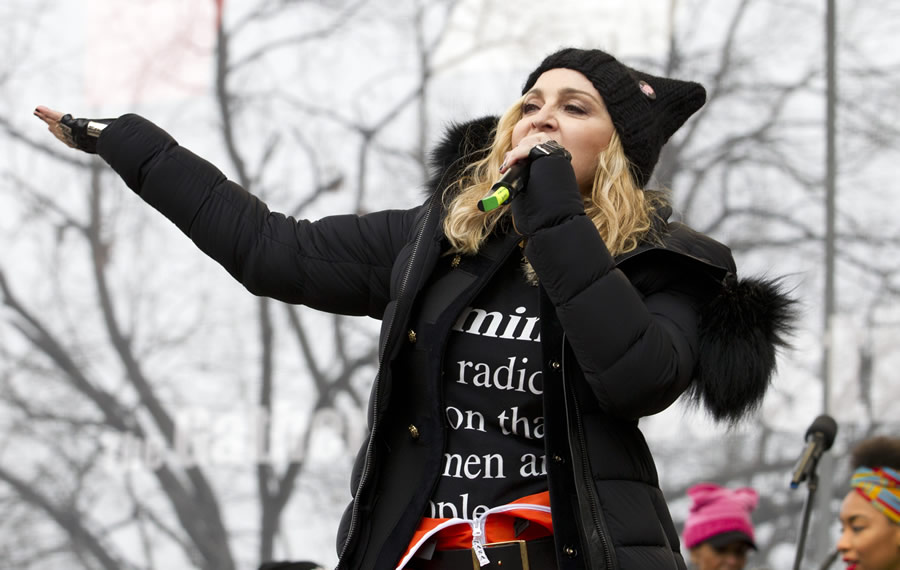 During the Women's March on Washington on Jan. 21, 2017, singer Madonna joked about "blowing up the White House."

Without a doubt, Kathy Griffin crossed a dark and ugly line when she posted her instantly infamous, beheading picture. And she’s suffering the consequences for her foolish actions. But is she alone to blame? Have not others contributed to the toxic atmosphere that provided the backdrop for her misdeed?

She alone is responsible for her decisions. And she took responsibility for those decisions in her apology. No one made her do what she did. No one pressured her or coerced her. She made a choice, and she’ll have to live with it.

But she’s not alone in terms of the unhealthy, anti-Trump hysteria that has rocked the nation. Without that hysterical backdrop, I don’t think she would have had the audacity to go as far as she did.

In January of this year, Madonna stirred up an anti-Trump women’s march, saying, “Yes, I’m angry. Yes, I’m outraged. Yes, I have thought an awful lot about blowing up the White House, but I know that this won’t change anything.”

And how did the women respond? With shock or with delight?

She said, “It took this horrific moment of darkness to wake us the f____ up.” And she led the women in chanting to the newly elected president, “I’m not your b­_____.”

In reality, her comments only made sense in context, and it was a context that these angry women devoured with glee.

None of Trump’s self-inflicted problems justify the over-the-top political attack he is experiencing.

Kathy Griffin’s sin was to articulate what these other celebrities wished for and longed for. The murderous hatred was already there.

But it’s not just singers and actors and comedians who have stirred up anti-Trump hysteria in America. Politicians have done it too.

Naturally, their words are more measured than those of entertainers like Madonna and Charlie Sheen. But their constant talk of impeachment and their over the top criticisms of the president give the impression that there is a ticking bomb in the White House, ready to explode at any time. Put another way, Donald Trump is a real threat to our nation and the world.

To be sure, I agree with Sen. Ted Cruz that some of the president’s problems are self-inflicted. During the campaign, he made his own over-the-top statements, and he was hurt by very vulgar comments from his past. Since elected, every time he has behaved in an unpresidential manner, he has made himself a bigger target for his critics.

But none of that justifies the sustained political attack he is experiencing. We’re now at the point that Rep. Maxine Waters could even claim that the public is “getting weary” with the Democrats for not impeaching Trump.

And impeaching him for what? Having two scoops of ice cream at dinner while his guests only got one? Or is he worthy of impeachment because he has been accused of stealing the election from Hillary Clinton with the help of Russia? Since when do you impeach someone based on unsubstantiated accusations?

Also contributing to the anti-Trump hysteria is the mainstream media with their incessant Trump-bashing. They excoriate him for virtually everything he says and does, always looking to finding fault, to embarrass, to hamstring him at every turn.

Watching some news reports, you get the feeling that there is almost an immature fixation on the president. Experienced news commentators suddenly sound like chattering children.

As for their reaction to the Kathy Griffin photo: While there was widespread media condemnation of her actions, in some circles, the criticism was muted.

For example, when Jake Tapper introduced the photo during a CNN panel discussion, he gave a warning to viewers, especially those with kids, saying, “You might find what we’re about to show you a little bit graphic …”

A little bit graphic? Really? Would he have introduced the picture the same way if it had been the severed, bloodied head of President Obama? Would CNN have even shown it?

He further described it as “pretty disgusting,” laughingly wondering how anyone would think it was appropriate. But again, would his tone have been the same had, say Tim Allen done to Obama what Kathy Griffin did to Trump?

It’s time we ask ourselves what kind of world we want to bequeath to our children and grandchildren.

But once the panel starting talking, things got worse — much worse. Molly Ball, a political writer with The Atlantic said she had a hard time even bringing herself to care about this. She claimed it was just another of Trump playing the always-persecuted, victim card.

As for Griffin’s actions, Ball said, “Of course, like, comedians and celebrities say dumb stuff and do dumb stuff. And, and violence is not appropriate. But I just don’t think that’s the source of President Trump’s problems.”

CNN contributor David Urban was then asked for his opinion. His response: “I think we’ve got much bigger issues to focus on than Kathy Griffin.”

So, not only do major media outlets like CNN help fan the flames of anti-Trump hysteria, but they also engage in the worst kind of self-righteous hypocrisy. In this case, they downplayed the ugliness of a photo of the severed head of the president of the United States. No big deal! Just comedians being dumb. There are bigger fish to fry.

As for the image itself? It’s a “little big graphic” and “pretty disgusting.” Nothing more.

Needed: A Dose of Civility

In stark contrast, as pointed out by the Daily Wire’s John Nolte, CNN expressed outrage when a rodeo clown wore a Barack Obama mask during his act in 2013:

It should also be noted that in the past this same rodeo clown had worn a mask of presidents’ Reagan and Bush. Nevertheless, until he was properly banished from society and lost all hope of future employment, CNN pushed and pushed and pushed the story; toxified this poor guy as an example in never mocking The Precious.

Coming back to 2017, even though CNN released Griffin from her New Year’s Eve job, and even though Tapper and others have since weighed in with stronger condemnation of the photo, that initial panel discussion said it all. It reminded us that Griffin did not act in a vacuum.

For those on the left who would say, “Yeah, but the right-wing media savage President Obama,” I would agree. There’s hypocrisy on the right as well.

I would simply argue that the major players in right-wing media did not incite the same kind of anti-Obama hysteria that the left has against Trump (although I don’t justify the sins of the right any more than the sins of the left).

There’s one more player that helped create the toxic platform for Griffin’s actions, but this one is somewhat nameless and faceless. It is made up of millions of people posting the most horrific comments on social media and composing the vilest graphics and videos. It is a savagery let loose by the internet. It makes some people think they can get away with feigned murder. Or even murder.

It’s time we take a deep breath, get a grip on our emotions, and ask ourselves what kind of world we want to bequeath to our children and grandchildren.

A little dose of civility, anyone?