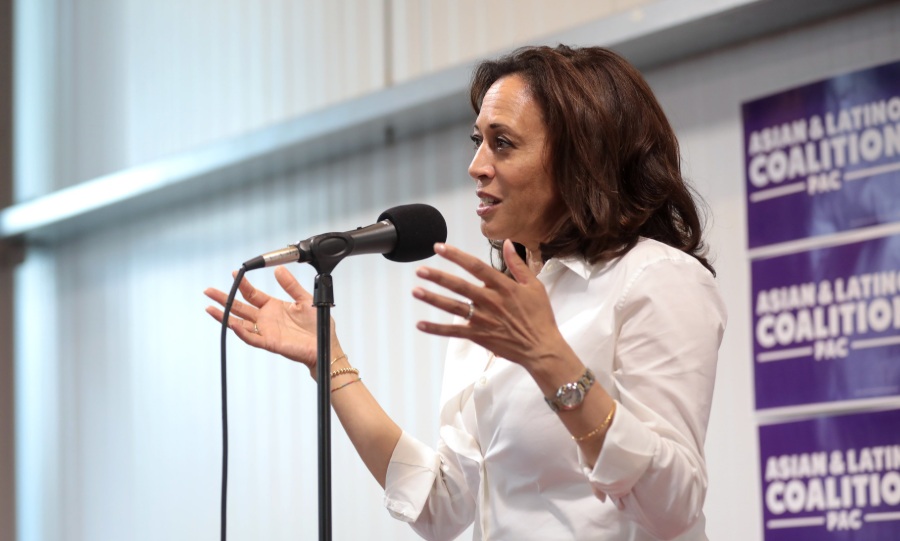 I said Kamala Harris would be the nominee over a year ago. Ultimately, I wasn’t wrong. We’ve known that Biden’s running mate would finish out his term if he won. And even then, as far back as Easter, I picked her to be Biden’s choice for running mate.

What were the choices? Bernie, who’s too old? Elizabeth Warren, Bernie with a brain, who lets Trump bait her into doing stupid things? Tulsi Gabbard, who was slightly different than the rest? Buttigieg, the “Look at me, I’m gay!” candidate? Beta O’Rourke, who got good press, but was a weirdo? The rest of them, whose names we’ve already forgotten?

But I had my worries. I was (and am) concerned about the overconfidence I hear on our side, from Wall Street Journal types calling liberalism “a spent force” to Claremont Institute conservatives who said Biden will lose because he is the establishment Trump overthrew.

Maybe the second were right. But I was hearing that liberalism was “a spent force” in the early GWB years. What happened with liberalism? Ten years later, the White House was bathed in rainbow colors and the Little Sisters of the Poor were told to provide contraceptives or else.

And ten years after that? We had a nation in which, as my Stream article put it, “Bernie Sanders Could Win It All.” But he lost! No, not exactly. Bernie the person lost. But Bernie the movement won. They are now largely in control of the party … and even, in many places, of the streets. Their new standard-bearer? Kamala Harris.

Added to the very liberal Biden, we have the arch-liberal Harris. She’s the political opportunist who persecuted David Daleiden for exposing Planned Parenthood. She attacked judicial nominees for being in the Knights of Columbus, as if a believing Christian can’t be a judge.

As “whole life” leader Charlie Camosy wrote: “She is an abortion rights extremist and genuinely pro-abortion. (And I don’t say that about most who ID as pro-choice … most are not pro-abortion. She is.) She supports no restrictions at all. Abortions paid for with pro-lifers tax dollars. And no religious freedom exceptions. Under a Harris administration, Catholic hospitals would be forced to do abortions.”

We’ve got more trouble than our side has yet realized.

Harris is the smart choice for Biden. It’s a high stakes gamble that will either crush us or crush him. No one else brings as much to Biden as Kamala, for good and for ill.

As I said for sixteen months, Kamala is the Democrat I dislike the most. No other candidate brings the ideological fanaticism and the chops to carry it out the way she does.She’s not just talk, like most of the others. She knows better than anyone since Obama how to exploit the dying embers of our democracy to advance the coming authoritarianism.

Look at the way she flipped the Planned-Parenthood-selling-aborted-baby-parts-scandal on its head. It was a public relations disaster for the abortionist. She turned it into a persecution of David Daleiden. She made him the bad guy. Hers was a trick worthy of a totalitarian state.

Look at her attempt to delegitimize the Knights of Columbus by attacking a judicial nominee’s membership in the organization. It’s a Catholic men’s organization, dedicated to service and deepening its members’ spiritual lives. Of course, it’s strongly pro-life, but otherwise not very political.

But that was enough for Harris to make it an enemy. She says that being a knight is so bad it disqualifies a man from being a judge. Again, a trick worthy of a totalitarian state. Nothing says mainstream, average-guy in the pew, believer like the Knights. And she went right at them.

And look at the repressive idea she came up with during the debates. In a Harris administration, the Justice Department would simply declare state-level pro-life laws to be in conflict with federal law and therefore invalid.

All that sounds crazy, right? So did trying to force nuns to provide contraceptives, something Biden insists on doing even though the Supreme Court said no.

Just wait. Kamala will be cooking up a lot more where that came from. And like Obama, she’s got the chops to make it happen.

What this means is the Left will be energized by this pick. They can see the possibilities I see in her. They’re going to work much harder for Biden than was the case just a few hours ago. You think the stakes for Christians were high before today? They just got way higher.

Biden is only the fourth Catholic in history to be a major candidate for President. Yet he is running a campaign that will specifically target the Church for persecution. Biden is running on an explicitly anti-Catholic platform. And if he targets the Catholic Church, he’s targeting Christians in general. His choice of running mate seals that deal like none other could.

This election, the issue isn’t just the Supreme Court and the unborn child, as huge as that is. It’s whether the Church’s ability to proclaim the gospel in the USA, as it has since the nation’s founding, will be put to an end. Whether one of our own will be the instrument of a persecution of us like we have never seen in this land.

That is the agenda that Joe Biden has just greatly advanced with his choice of Kamala Harris today.

The stakes just got way higher. But the flip side is that it should energize us too. If we have what it takes.