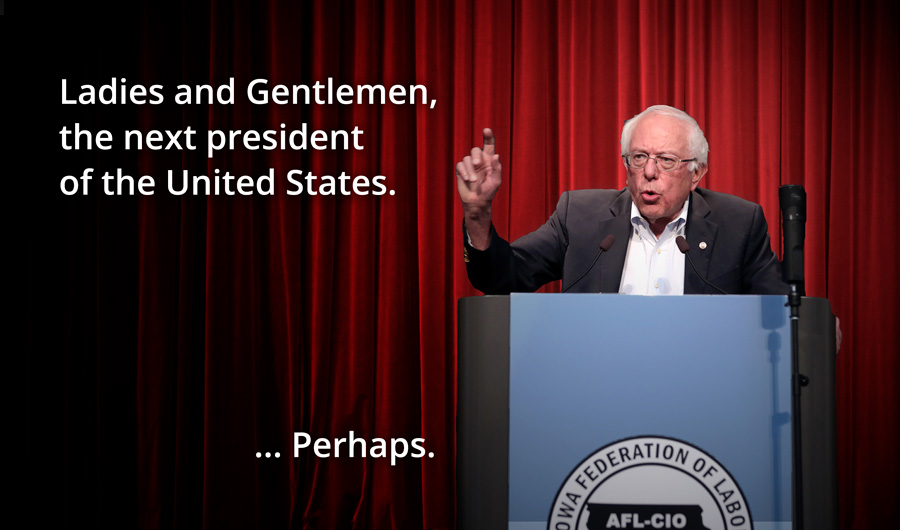 So Joe Biden wins South Carolina and Pete Buttigieg (the last of the most-annoying Democrats) drops out. Where does that leave us?

It leaves Biden and Bloomberg to fight over who gets to be the anti-Bernie. That will end as I said it would two weeks ago: Bloomberg will spend a billion dollars, but that will only split the “moderate” vote. The result: Bloomberg fighting Biden unintentionally gives the nomination to Bernie.

Amy Klobuchar’s out and threw her support to Biden. I’m assuming Elizabeth Warren will continue to fade. She’s too progressive to draw moderates when they’ve got Biden. And she’s too far to Bernie’s right — remember when she said “I am a capitalist”? — to draw many voters from him.

Biden is the more sensible choice for anti-Bernie Dems. He’s a life-long Democrat. He was vice-president to a popular president for eight years. His support among African Americans is authentic. He’s a much nicer guy than Bloomberg. And he’s not a billionaire.

Whatever support Bloomberg has from anyone has mostly been bought. Almost no one would want him as a candidate if he’d been the mayor of, say, South Bend. But he won’t quit. He’s too rich and entitled to fall on his sword. By the time he gets out, it will be too late. He’ll take the whole “moderate” lane down with him.

Bob Stefanowski was the Republican candidate for Governor in 2018. He was a wealthy, self-made man. But he was so out of his depth in Connecticut politics that he had not even voted in the previous 17 years. Bob flooded local broadcasts of the Fox News Channel and talk radio with advertising and won the nomination. Then he made several easily-predicted miscues and lost the general election.

Linda McMahon, until recently, served in the Trump Administration. But in 2010 and 2012 she was a self-made wrestling tycoon who dropped $50 million a piece on two consecutive losing bids to be one of Connecticut’s U.S. Senators.

To be sure, being a former Mayor of New York City counts for a lot more than having skipped Election Day for 17 years. But it is possible that Bloomberg would follow the path blazed by Stefanowski: win the nomination through overwhelming air superiority only to be in over your head in the general election.

More likely, though, Bloomberg will be a presidential-level Linda McMahon. She dropped $100 million on her two races and had nothing to show for it. Bloomberg is prepared to drop more than ten times that amount but, I expect, with the same result. And in this case, it will simply help nominate Bernie.

To be sure, I expect Bernie to be the nominee anyway, unless the DNC cheats him out of it again. Which brings us to the general election.

I had hoped — and still hope — that 2020 would be another 1984. A triumphant Republican president overwhelmingly reelected on the strength of a great economy and other accomplishments.

But along came the coronavirus and last week’s market tumble. Much of the public didn’t care about Russian Collusion, alleged obstruction, false accusations of racism, the Ukrainian phone call-impeachment, etc. But they do care about this.

If Trump somehow fumbles the twin challenges of coronavirus and the market, we’re in trouble. Instead of another 1984, we could have another 2008. But with a much more radical candidate. Don’t think Bernie can’t win. He can win under the right circumstances.

It May Not Matter

In politics, perception is reality. Before you remind me of all the challenges Trump already beat down, the public really didn’t care about Russian collusion, etc. They care about this. This has to do with their health and their bank accounts. It’s about their future.

It may not matter if Trump does a good job on coronavirus and the market if the Democrats can convince the public that he failed at it. The Democrats will certainly tell that story. The major media will also be telling that story.

If enough people buy that story, especially swing voters in swing states, Sanders becomes the candidate who will save them. He becomes the hope for the future. People who never thought they’d never vote for a socialist will click on the Democratic button on election day.

If Trump fails with the virus and the market, or is simply believed to have failed, we really could end up with an avowed socialist in the Oval Office.