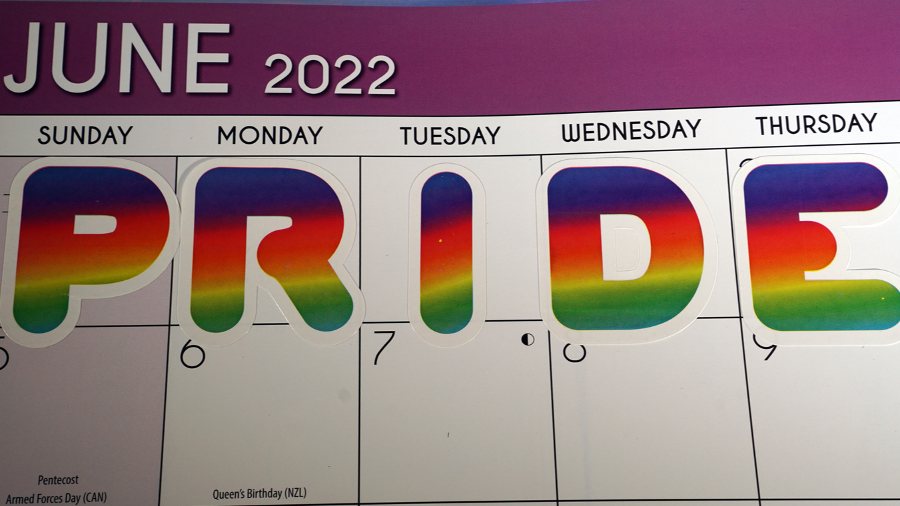 It is now official, embedded on your Google calendar whether you like it or not. June 1 marks the beginning of LGBTQ+ Pride Month, and the only way to remove this notice is to remove all holiday announcements from the app. Thus says Google. (If Google did this before this year, I had not noticed it.)

To be sure, Google is consistent in its activism, at least to a point.

But for the moment, those questions are off topic (although if you’re White, every day is White American Shame Day, especially if you are guilty of being a White male).

But this does underscore the large difference between being Black. Or female. Or Asian Pacific. Or Hispanic. Or American Indian. Versus identifying as lesbian. Or gay. Or bi. Or trans. Or queer. Or +.

The former identities make no moral or behavioral assumptions. The latter identities assume that same-sex relationships are valid. That gender is what you perceive it to be. That virtually all (adult, consenting) sexual attractions and romantic desires are to be affirmed.

I laid out the clearly outlined, publicly stated goals of gay activists, coupled with their steadfast denials that a gay agenda existed.

What makes all this so ironic is that, for years, gay activists denied that they had an agenda at all. In fact, the idea of a “gay agenda” was considered to be rightwing propaganda, the creation of the paranoid minds of Bible-thumping Christians, a silly myth to be dispelled by the tide of truth.

That’s why I began my 2011 book A Queer Thing Happened to America with a chapter titled, “A Stealth Agenda.”

Yes, There is an Agenda. I Wrote a Chapter Documenting It

In this chapter, in devastating, systematic fashion, I laid out the clearly outlined, publicly stated goals of gay activists, coupled with their steadfast denials that a gay agenda existed.

In fact, I started the chapter with these opening quotes: “The ‘Gay Agenda’ is but one of the many lies promulgated by radical religious political activists.” (The Rainbow Alliance).

And, “The ‘gay agenda’ is a term that has been coined for propaganda purposes by the forces of religious fundamentalism. To enhance what they would have others believe is the ominous dimension of this term, they also refer to ‘the homosexual agenda.’” (Jack Nichols, The Gay Agenda)

As I wrote, “Despite the fact that the ‘homosexual community’ is as diverse as the ‘heterosexual community,’ there is vast agreement among homosexuals that there is no such thing as a gay agenda. In fact, such terminology is to be studiously avoided, as noted by GLAAD (the Gay & Lesbian Alliance Against Defamation) in its informational posting ‘Offensive Terminology to Avoid.’”

Later in the chapter, after citing a 1970 document containing, “AN OUTLINE OF IMPERATIVES FOR GAY LIBERATION,” I wrote, “But there is no gay agenda, despite a gay manifesto with a call to action for the purpose of gay liberation.”

Yes, “there is no gay agenda, despite a [1972] gay rights platform spelling out militant, comprehensive goals, including the repeal ‘of all laws governing the age of sexual consent’ (an endorsement of pederasty!) and governmental recognition of multiple-partner ‘marriages’ (today called ‘polyamory’) at both the national and statewide level.”

Over and over again, with every quotation carefully documented, the same lines were repeated, as I noted, “there is a national gay, lesbian, bisexual, and transgender task force, an organizing and training program, a policy institute, and an annual ‘Creating Change conference. But there is no gay agenda.”

Working in the educational system is GLSEN (pronounced ‘glisten’), with an annual budget of almost $6 million. Its mission statement explains: ‘The Gay, Lesbian and Straight Education Network strives to assure that each member of every school community is valued and respected regardless of sexual orientation or gender identity/expression.’ This includes training teachers in what is called ‘gender speak,’ recommending textbooks such as the famous (or, infamous) Heather Has Two Mommies, encouraging children to question their parents’ non-gay-affirming views, and sponsoring an annual ‘Day of Silence’ to draw attention to what is referred to as the widespread oppression and persecution of gays and lesbians — but there is no gay agenda.

And I remind you that this book was published in 2011, based on 6 years of writing and research.

Sexually Destructive Behavior is Now Accepted and Celebrated by Society

To give you one last quote, I noted:

In the last four decades, major changes have taken place in: 1) the public’s perception of homosexuality and same-sex relationships; 2) the educational system’s embrace of homosexuality; 3) legislative decisions recognizing gays and lesbians as a distinct group of people within our society, equivalent to other ethnic groups; 4) the media’s portrayal of GLBT people; and 5) corporate America’s welcoming of what was once considered unacceptable behavior. Is this simply one big coincidence? Did all this happen by chance? Don’t these very results — which barely tell the story — give evidence to a clearly defined gay agenda?

Today, in 2022, like it or not, LGBTQ+ Pride Month is embedded on your Google calendar.

And there is no gay agenda.