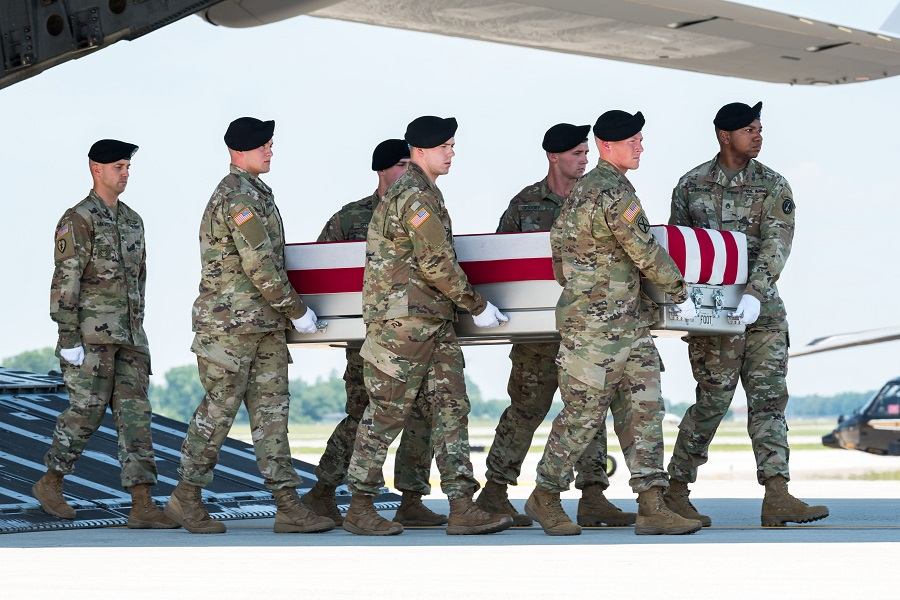 A U.S. Army carry team transfers the remains of Sgt. James G. Johnston of Trumansburg, New York, during a dignified transfer ceremony on June 28, 2019, at Dover Air Force Base in Delaware.

This July 4th holiday marks the 18th Independence Day since our nation’s military went to war in Afghanistan. On Friday, the remains of one of two brave soldiers killed there last week arrived on American soil.

U.S. Army Sgt. James Johnston’s casket was wrapped in the very flag he died to defend.

As painfully demonstrated by last Tuesday’s tragic deaths of Sgt. Johnston and Master Sgt. Micheal Riley, who were just children on 9/11, America’s volunteer warriors are still willing to sacrifice everything for the cause of liberty.

“Jamie wanted to be a soldier since he could say the word ‘soldier,'” the fallen hero’s mother, Meghan Billiot, told KCEN-TV. “I think it was one of his first words.”

It’s impossible to imagine the pain this Gold Star family is experiencing. The day before Sgt. Johnston left for Afghanistan, the Explosive Ordnance Disposal soldier’s wife, Krista, told her 24-year-old husband that he was about to become a father.

Instead of welcoming their new first child into the world together, Krista told the TV station that their baby girl will be named after the father she’ll never be able to meet. These are the gut-wrenching sacrifices military families still make for our freedom.

Widow, mother of Fort Hood soldier killed in Afghanistan plan to carry on his legacy https://t.co/h7HfYeVBIv

Master Sgt. Riley was a Green Beret serving on his sixth combat deployment. Like his fallen brother in arms, he was also thinking about raising children upon returning from Afghanistan.

“He was getting nervous going over there on his sixth deployment,” the Green Beret’s cousin, Tony Riley, told KTVI-TV. “And now at his age, 32, he wanted to settle down and start a family, so I believe he was nervous this time.”

A third soldier who was also a Green Beret, Sgt. 1st Class Elliott Robbins, 31, died Sunday in Afghanistan’s Helmand Province. According to the Pentagon, the Ogden, Utah, soldier’s death was “a non-combat related incident.”

All three soldiers had their whole lives ahead of them, yet chose to put on their country’s uniform and risk their lives for something bigger than themselves. I wish more Americans would take notice of the courage all around us, whether it’s the Fourth of July or a random date on the calendar.

Patriotism is year-round, not just something conjured up while watching fireworks. Soldiers, sailors, airmen and Marines spend every single day training, preparing and serving, with the stakes even higher during wartime.

Unfortunately, too many of us long ago checked out on the wars our Armed Forces continue to fight. Everyone from journalists to politicians of both parties share blame in Afghanistan being dubbed “the forgotten war” while Americans are still dying there.

“Freedom isn’t free” is not a cliché. It’s right there in plain sight, as evidenced by the above image of a young patriot returning home in a flag-draped casket.

The best way for us to honor the ongoing valor of our troops is by paying attention to their daily deeds while also praying for their safe return. We should also be asking the Lord to comfort military family members like Krista Johnston, who will soon be raising a precious baby daughter on her own.

“These young are like their fathers and their grandfathers, just as willing, just as brave. And we can be just as proud,” President Ronald Reagan said on July 4, 1986. “But our prayer tonight is that the call for their courage will never come. And that it’s important for us, too, to be brave; not so much the bravery of the battlefield, I mean the bravery of brotherhood.”

One of the loudest calls to serve came on a September morning just over 15 years after President Reagan’s speech. To this day, it is still being answered by warriors like U.S. Army Sgt. James Johnston, Master Sgt. Micheal Riley and Sgt. 1st Class Elliott Robbins.

The freedom we celebrate on Independence Day is a blessing. Being defended by the world’s bravest men and women is an even greater honor.