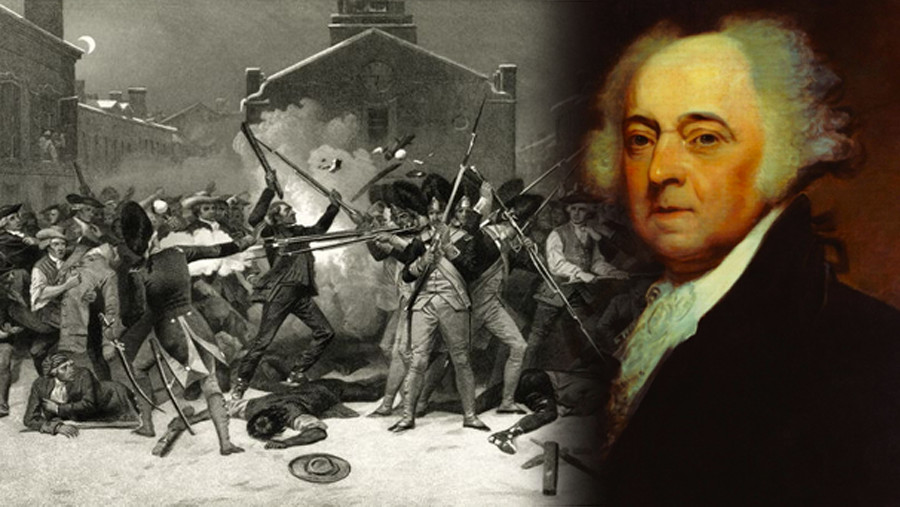 The Boston Massacre of 1770 and John Adams, the patriot who respected the law so much that he defended the British soldiers.

“Facts are stubborn things; and whatever may be our wishes, our inclinations, or the dictates of our passions, they cannot alter the state of facts and evidence.”

So spoke John Adams at the trial of the British soldiers involved in what has been passed down in American memory as “The Boston Massacre.” Such insight we would be wise to remember in our own day of agenda-driven narratives about police shootings supplanting the facts — and therefore the tragedy.

It was the winter of 1770, in Boston, Massachusetts. Tensions had been rising with Britain for a decade and now the government in England wanted to impose new taxes, Armed British soldiers patrolled the city. The tensions burst forth violently on the cold, wintry evening of March 5 when a British patrol confronted an angry mob. The result was the death of five colonists at the hands of the British soldiers.

Patriot leaders such as Samuel Adams and Paul Revere kicked into high gear. “Murder!” they declared. This was just further evidence of British tyranny.

But then came a trial, and no one could find a lawyer willing to represent the “bloodthirsty” British soldiers who faced the death penalty. John Adams seemed one of the least likely candidates, having strongly attacked British policy for nearly a decade. But, believing that all human beings in a free country are both entitled to the presumption of innocence and the benefit of legal counsel, he agreed to represent the soldiers.

The costs were immense. He knew that his legal practice would plummet if he defended the British soldiers, and that it would plummet further if he was successful in that defense. And plummet it did when — faced with perhaps one of the most spoiled jury pools in history — he earned the acquittal of all but two of them. He argued that faced with an angry mob that began attacking them, the troops reasonably feared for their lives and fired in self-defense.

That was not what patriotic colonists wanted to hear. His countrymen saw him as a traitor to the cause he had so ardently defended and hated him for bucking the popular narrative against the British.

But he had called the jurors to focus not on their narrative of the bloodthirsty British, not on the mob, not on their own reputations and the temporary passions of the moment, but on the facts and the evidence. He asserted the cause of truth and the rule of law in an angry and resentful time in which many were more interested in advancing their narrative then in the justice due to their fellow men.

And when the time came for the convocation of the first Continental Congress four years later, everyone in Massachusetts knew that they wanted to be represented by John Adams. They realized in 1774 what they didn’t in 1770: that by defending the British soldiers, Adams, far from abandoning the ideals of the patriot cause, asserted and defended those ideals, especially the rule of law and human rights, which were increasingly being abused by the British.

Our feelings and desires can’t change those “stubborn things” called facts. The law, he said (quoting Algernon Sidney), “’does not enjoin that which pleases a weak, frail man, but without any regard to persons, commands that which is good, and punishes evil in all, whether rich, or poor, high or low.’ ’Tis deaf, inexorable, inflexible. On the one hand it is inexorable to the cries and lamentations of the prisoners; on the other it is deaf, deaf as an adder to the clamors of the populace.”

What ought we learn from this? I trust many of the lessons are clear. It should not for a second be presumed that by using this example, I am assuming that the cops involved in the recent tragic deaths were innocent. Far from it. The lesson of the “Boston Massacre” trial is emphatically not that those entrusted with enforcing law and order are always, or even mostly, right.

The lesson is that in all matters of justice, and particularly in times when so many have made ideological narratives and political gamesmanship the standard of their actions rather than truth and justice, it is essential that we judge by facts and evidence. This is especially true when we are dealing with the fates of men who retain the presumption of innocence.

To this day, it remains false to say that what happened in Boston on March 5, 1770 was a “massacre.” The name itself is a vestige of a false narrative — a narrative perpetrated by men who, while deserving of our respect and honor for their services to our country, were temporarily overcome by their own passions; men who, if not restrained by the integrity of others, would easily have ended up throwing their own integrity away.

As for the recent police shootings in Minnesota and Louisiana, I am inclined to believe that the police may have overreacted in at least one of these incidents. But I don’t know that for sure. And neither does anyone else at this very early moment.

We owe it to those men, but also to ourselves, to our society, and especially to those who have been denied justice because of assumptions, narratives and prejudices leveled at their own skin color, to ensure that the presumption of innocence remains intact and inviolate.