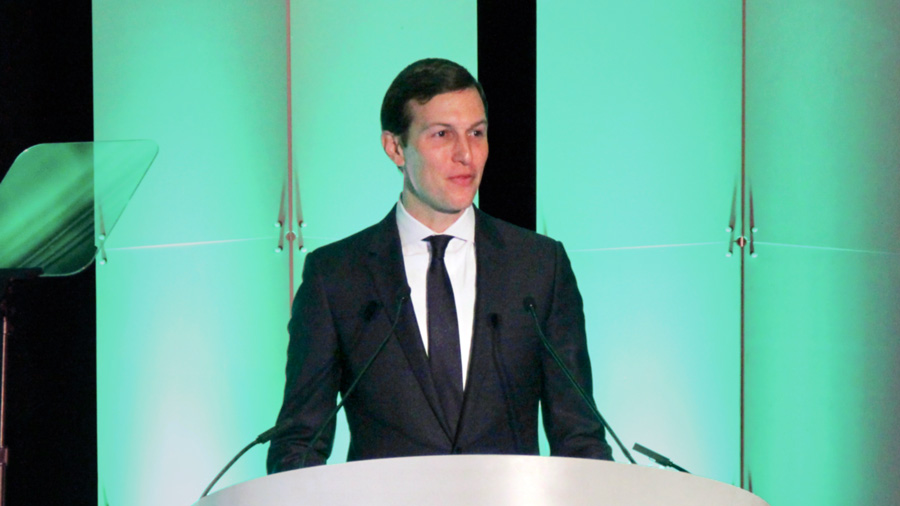 In this March 6, 2018, file photo Trump adviser Jared Kushner speaks at HIMSS2018, a conference for health information and technology professionals, in Las Vegas.

In yesterday’s evening edition of my newsletter, I featured a particularly astute letter as “Reader Comment of the Day.” Today, because of something that has since made news, I’d like to look at the same letter in a brand new context. In just a matter of hours, it’s become even more timely. First, here’s the letter…

Russia may have lost the Cold War, but they are winning the PRAVDA war. It seems that for the price of a Baltic Cruise, Russia has sown years of discord within the US political system. Fantasies, lies and misinformation fed to voracious Trump haters within the DNC, biased Intelligence agencies and unhinged, corrupt media companies have caused mass division in our Democratic Republic. Putin has gotten a great return on his investment and the left doesn’t even see their complicity.

And here’s the answer I gave him yesterday:

You’re right, Scott. (Putin must be falling off his horse laughing.) One thing I’d add is that after investing some additional $$$, including a cool half-a-million paid personally to Bill Clinton for a couple of speeches, he ended up with 20 percent of America’s uranium supply as well. All in all, Putin must consider that money VERY well spent. Thanks for writing!

As you see, Scott sent us a great comment. But it offers even more food for thought now that Jared Kushner, husband to Ivanka Trump and the President’s son-in-law, has taken some major heat for what he said about the Mueller report and Russian interference in an interview with Brian Bennett of TIME magazine.

“I thought the whole thing was kind of nonsense, to be honest with you,” he said to Bennett, speaking of the special counsel.

Good for him, because from what we know and are still learning about the investigation into Trump “colluding” with Russia, “nonsense” is just what it was. In fact, I speculate that most people who’ve had to go before this special counsel might use a, shall we say, cruder term for what it was. The whole thing looks to have been a frame-up by the FBI, based on no real evidence of any crime.

“Now the media spent so much time focusing on it,” he continued, “and quite frankly the whole thing’s just a big distraction for the country.”

Again, it’s hard for a thinking person to disagree. Our country has been thrown into chaos. This is the kind of disruption Putin’s dreams are made of, and we largely did it to ourselves. That’s what Scott was talking about in his letter.

Kushner noted that the $160,000 Russia spent on Facebook ads was what the Trump campaign would spend in just a few hours. He would know. And then he made the statement that caused jaws to drop across Washington, D.C., and made the next few hours a breeze for headline-writers, even though he’s right:

“It’s a terrible thing, but I think the investigations and all that speculation that has happened for the last two years has had a much harsher impact on our democracy than a couple of Facebook ads.”

Oh, my stars! Get the smelling salts. Is Jared Kushner daring to say that what RUSSIA RUSSIA RUSSIA did to interfere in our election process had much less effect on our democracy than what was done by Americans here in our own country? Yes, that is what he’s saying. That’s the statement all the news outlets breathlessly picked up.

There’s this article from Breitbart. To compare and contrast, here’s a different take, from Bloomberg News:

Kushner’s portrayal of Russian interference — “they tried to buy some Facebook ads to sow discontent” — contrasts with the sophisticated, multi-pronged campaign by the Russian government exposed by Mueller in his 448-page report issued last week. The special counsel detailed how Russia tried to establish contacts with multiple officials working on Trump’s campaign who, in turn, appeared eager to receive the assistance.

What the Bloomberg story — like the “448-page report” it purports to detail — fails to address is that the “sophisticated, multi-pronged campaign” was actually carried out by our own intelligence community. The Hillary Clinton campaign and the Democratic National Committee led a concerted effort to bring in Russian sources to discredit Donald Trump, first as a candidate and later as the duly elected President of the United States.

Yes, there were some Russian efforts, such as trolls who bought Facebook ads. But the real business of affecting Trump’s candidacy through “collusion” started right here in the good old USA. And Trump was not involved.

Just to cite a couple of examples: We absolutely know that Christopher Steele was hired by Fusion GPS to seek out Russian sources for the “dossier,” and that Russian specialist Nellie Ohr was assisting in that effort. Also, it appears more and more likely that even the infamous “Trump Tower” meeting was not initiated by Russians but was set up by Fusion GPS.

Read the Bloomberg version, with its cherry-picked lines from the Mueller report, and the smell of anti-Trump sentiment will come through stronger than anything you’d whiff at Walmart.

As Serious as It Gets

Presidential candidate Kirsten Gillibrand went much further, calling what Kushner said “an outrage” and “untenable” in an interview with Andrea Mitchell on (where else?) MSNBC.

“He clearly hasn’t read the report himself,” Gillibrand said. (Note: That seems incredibly unlikely, considering he spent hours cooperating with Mueller’s investigation and is in the report.) “But what he said is an outrage,” she continued. “For him to make light of a foreign adversary purposely trying to undermine our elections in untenable … Those statements are highly inappropriate.”

(I would link to the Gillibrand story, but it’s from Newsweek, and right now I don’t feel like going through and correcting the misstatements of fact in it regarding Trump, which I would feel obligated to do if I linked to it. Life is too short.)

Our own intelligence and law enforcement agencies have been compromised at the highest levels. I’d say that’s about as serious as it gets.

If Kushner was “making light” of Russia’s efforts, it was merely to draw a comparison between them and what was (and is) being done by Americans in our own country. The weaponizing of our own FBI for political purposes, the spying on Americans with fraudulently-obtained warrants, the appointment of a special counsel when there was no evidence of any crime, the resulting furor in the media — these things have certainly had much more effect on our republic than Russians did. And they continue to. Our own intelligence and law enforcement agencies have been compromised at the highest levels. Numerous individuals have been fired or resigned. Some are under investigation. Many more need to be under investigation. I’d say that’s about as serious as it gets.

Kushner will be getting a lot of grief for his remarks, but he was right to say that a phony investigation that started long before the election — and that will continue indefinitely, courtesy of Congress — has caused more damage to our election process than Russia has. Putin made a few judicious investments and ended up winning the lottery, thanks to Americans who don’t care what they do to our country as long as it helps them take down Trump.