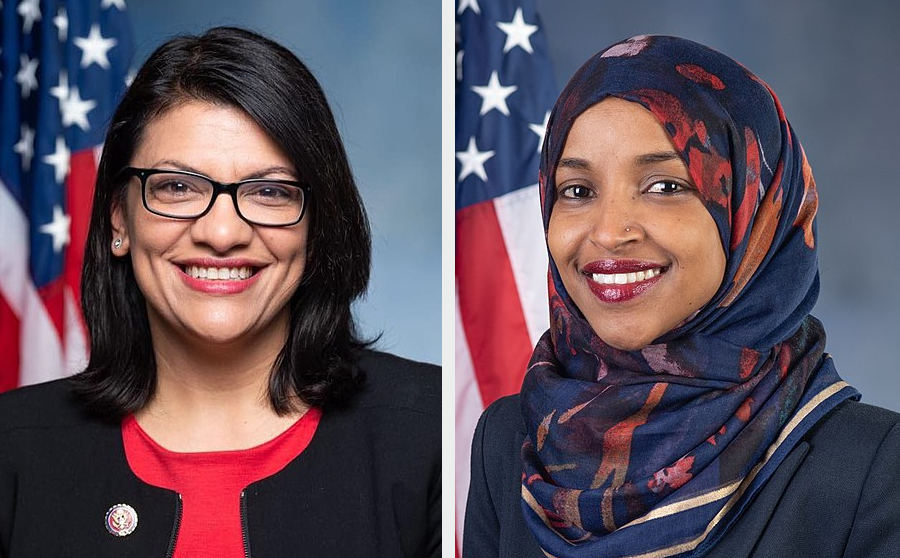 The dueling headlines said it all. On the right, the Breitbart homepage proclaimed, “Bibi Bans Jew Haters.” On the left, the Huffington Post announced, “Israel Extreme: Muslim Critics Not Welcome.” The question is: Did Israel do the right thing in banning Reps. Ilhan Omar and Rashida Tlaib from entering Israel? And did President Trump influence that decision?

Why let in those who seek to hurt?

Not only are Omar and Tlaib supporters of the BDS movement (who recently compared the Israeli government to the Nazis). Their visit was partially hosted and organized by Miftah. This organization “‘has accused Israel of committing ‘massacres,’ ‘apartheid,’ ‘summary executions’ of Palestinian youth and ‘Judaizing’ Jerusalem. It has also accused Israel of ‘ethnic-cleansing of Palestinian-Israeli Arabs.’”

So much for Omar and Tlaib having any good intentions.

As Israel’s Interior Minister stated, “it is inconceivable that Israel would be expected to let into the country those who wish to hurt it, including by means of the visit itself.”

In short, these Israel-haters would be given lots of fuel for their hostile fire. Why should Israel allow them to step foot in their country? For what purpose?

Undemocratic to Bar Congresswomen From Entry?

In response, Omar wrote, “Denying entry into Israel not only limits our ability to learn from Israelis, but to enter the Palestinian territories. Sadly, this is not a surprise given the public positions of Prime Minister Netanyahu, who has consistently resisted peace efforts, restricted the freedom of movement of Palestinians, limited public knowledge of the brutal realities of the occupation and aligned himself with Islamophobes like Donald Trump.”

Interestingly, the American Israel Public Affairs Committee was critical of Israel’s decision. The committee tweeted, “We disagree with Reps. Omar and Tlaib’s support for the anti-Israel and anti-peace BDS movement, along with Rep. Tlaib’s calls for a one-state solution. We also believe every member of Congress should be able to visit and experience our democratic ally Israel firsthand.”

Israel’s decision also prompted “Democratic lawmakers to rally around Omar and Tlaib — including members of Congress who had previously expressed criticism over their positions — uniting moderates and progressives who have disagreed over this broader issue for months.”

What, then, should we make of Israel’s decision?

What was the motive?

In my opinion, if Prime Minister Netanyahu decided to ban Omar and Tlaib because of pressure from President Trump, it would be a wrong decision. Especially if Trump’s opposition to their visit was personal more than pragmatic.

What if the decision was not because of Trump? In effect, Israel would be saying, “We are not going to allow lawmakers who support BDS to enter our country for the purposes of mounting a propaganda war against us. Their minds are made up. They are the guests of Israel-hating militants. No good can come out of their visit. For the sake of our own dignity, we close the door in their faces.”

Certainly, I can respect this.

The positions of Omar and Tlaib are extreme. Their Palestinian hosts are extreme. Who says you have to be doormats, trampled by your enemies? As a sovereign nation, exercise your sovereignty. Simply say no.

A Lose-Lose Situation for Israel

The problem, of course, is optics.

Israel is concerned with Omar and Tlaib making them look bad. But in the process, Israel made itself look bad. They’ve played into the stereotype of being an oppressive, controlling bully.

In fact, according to Herb Keinon, writing for the Jerusalem Post before Israel announced its decision, “US Congresswomen Rashida Tlaib (D-Michigan) and Ilhan Omar (D-Minnesota), who have never hidden their deep dislike of Israel, have successfully boxed Israel into a lose-lose situation.

“If Israel lets in the congresswomen, it will lose because they will use every opportunity — at the al-Aqsa Mosque, at the security fence, at a refugee camp — to bash the Jewish state. And the press — both local and international — will eat it up. …

“And if Israel doesn’t let them in, it will lose, because it will make the country look undemocratic, and will give a full arsenal of ammunition to those who want to paint it as such.”

What, then, was Israel to do? If Keinon is correct, it was a lose-lose deal for Israel.

Perhaps he is right. But in an ideal world, Israel could have said, “We will be glad to host you and show you the real Israel. The free Israel. The enlightened Israel. The Israel that loves peace.”

This would mean that the government would play a key role in setting the agenda. They would make sure that Omar and Tlaib saw the freedoms enjoyed by the Arab (that is, Palestinian) citizens living Israel. That they saw the trauma that residents of Sederot have lived with for years, as Hamas has rained rockets in their direction. That they toured the Holocaust museum and spoke to victims of terror attacks. That they interviewed Israelis and Palestinians living side by side in peace. That they saw clear evidence of the corruption of Hamas and the Palestinian Authority. And yes, of course, that they also saw the hardships experienced by Palestinians living in the West Bank and Gaza.

Israel, then, could turn the visit into a positive propaganda campaign, documenting every step of their journey. And should Omar and Tlaib turn around and put a different spin on the trip, Israel could say, “Here’s what they said, but here’s the reality. See for yourself.”

In my view, that’s the best way to defeat the critics and the naysayers. Put all the cards on the table and let people make an informed decision. (For a great example, see the story of a group of millennials who were exposed to the best arguments of both Palestinians and Israelis.)

Apparently, however, that was not a real option, and it’s hard to believe that Omar and Tlaib were on a fact-finding mission at all.

In the end, this is Israel’s decision, which I respect. I’m just not sure it was the best decision. In the words of the pro-Israel, former-Congressman Steve Israel, “Fewer decisions could be more damaging to relations between the United States and Israel than the one managed by President Trump and the Israeli government to bar two members of Congress from visiting the state of Israel.”

Or, more simply, it might just be bad PR.

Update: Israel reversed its decision on Rashida Tlaib on Friday, saying it would now allow her to enter its borders. The reversal came after she said that this may be her last opportunity to see her grandmother and she would respect any restrictions on her trip. After that reversal, Tlaib also reversed her decision to go, saying it would be “humiliating.” Israel’s Interior Minister Aryeh Deri said Tlaib’s actions were intended to bash Israel. Israel’s decision on Omar remains unchanged.

Jesus Was Not a Palestinian