Actually, the Wimpy Thing Would Have Been for GOP Candidates to Put Up with Biased Debate Moderators 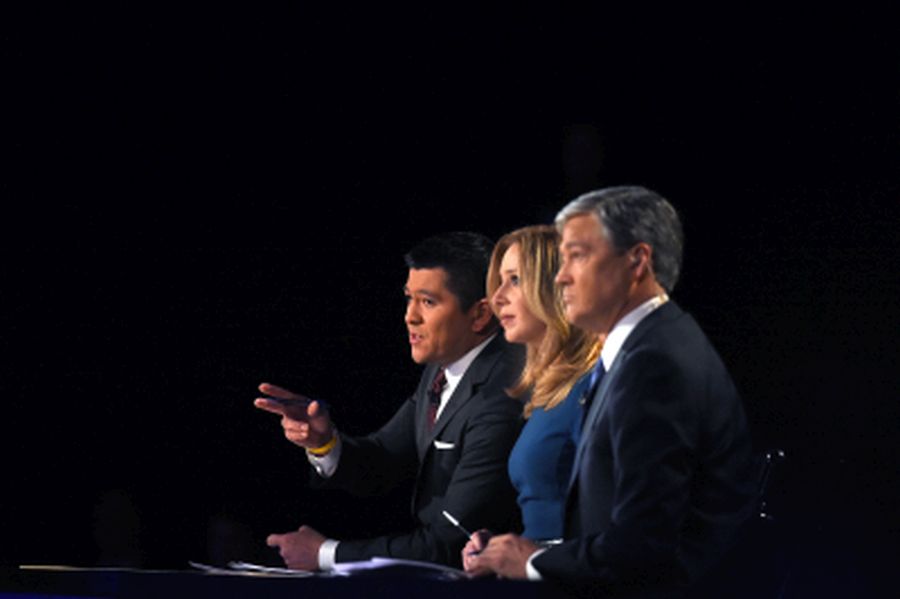 The substantiveness of the Fox Business/Wall Street Journal GOP presidential debate Tuesday night gave the lie to media complaints that the presidential candidates had been seeking to turn the GOP debates into toothless Safe Spaces.

After the CNBC debate, with its unabashedly biased moderation job, several candidates held a post-debate meeting and proposed new rules, including a 67-degree temperature stage, no “yes/no” questions, no hand-raising and prior panel approval of graphics used by questioners. Maria Bartiromo of Fox Business summed up the polite critique:

By the way, President Obama says, “If these guys can’t handle moderators, how are they gonna handle China and Russia?” You should be able to know that you’re going to be asked any question. It’s all fair game.

Superficially convincing, the Putin analogy falls apart on closer inspection. First, neither Putin nor any other national leader would dare ask questions as obnoxious as some put to the GOP candidates at the CNBC debate. And then, more fundamentally, the criticism conflates cannot tolerate with will not tolerate, an error Cruz “demolished (1:35) in the CNBC debate. Declining to tolerate rude, slanted and dumb questions is no sign of weakness. It’s a legitimate way to go after blatant bias and reassert some control over a conversation. I wouldn’t want a U.S. president negotiating with foreign leaders who didn’t have this in his or her diplomatic toolkit.

Diplomacy — as the word’s adjective form signifies — is a high-stakes game conducted within recognized protocols of behavior. When there is a breach of protocol — such as President Obama’s advisers leaking White House comments calling Israeli prime minister Netanyahu “chickens***” — this referring to a former elite commando who was wounded in action — sharp criticism should be expected.

Fox News journalist Megyn Kelly, well known for her barbed quips, chimed in about Ted Cruz’s call for only GOP questioners for GOP primary debates: “Would we have to submit our voting records to you or some committee?” Then she tweaked those that clearly she saw as whiners: “And then, maybe, like a foot massage?”

But the freedom to defend debate protocol is a vital, because otherwise GOP candidates will be unable to challenge moderator bias. And in a close election, even a small swing among independent voters could prove decisive. Consider the 1976 election in which Jimmy Carter edged Gerald Ford: Carter carried Ohio by 11,116 votes; had a single Carter vote in each of the state’s 6,000 precincts been cast instead for Ford, Ohio would have gone for Ford. To be precise, politics expert Michael Barone notes that vote swings of 5,559 votes in Ohio and 3,687 votes in Hawaii — 9,246 votes (.01 percent) out of 81,540,780 — would have kept Ford in the White House by swinging 29 electors from Carter to Ford, for an Electoral College margin of a single electoral vote.

There is a larger issue, too: dumb, rude, irrelevant questions deprive candidates of precious air time to make their case to voters, and deprive voters of potentially valuable insight into the thinking of candidates. Consider questions about candidate standing in the polls. Which politician, trailing, will say: “I’m hopelessly behind, and only a series of car wrecks — please, I am NOT wishing for this — involving those ahead of me will get me the nomination?” You will hear stuff about this or that uptick in the polls, plus the bromide about “wait until more voters get to know me.”

Worse are blatant factual errors, like those committed in the MSNBC debate by Richard Harwood at Marco Rubio’s expense, and the whopper told by CNN’s Candy Crowley at Mitt Romney’s in 2012. Investigation of candidate histories or issue evasions are legitimate — if similar scrutiny is given all candidates — but this was not done with then-candidate Barack Obama’s life history or with his phony Obamacare promises.

Add to this the ugliest bias of all: leftist media ignored black-letter courtroom quality proof that Hillary flatly lied to the grieving families whom she met when the bodies of four slain Americans were returned after the Benghazi terror attack.

The questions and topics that matter to me the most were missed especially in the most recent debate. To me, that’s a huge missed opportunity, and you’re not doing the American voter any favors by focusing on yourself, the moderator.

Thankfully, Smith and her colleagues were vindicated by substantive queries and the tone of the Fox Business News debate; it offered a welcome contrast to MSNBC’s farce, factors even acknowledged by Fox Business rival CNN Money.

But it was left to Ted Cruz to offer the best comment on journalists, addressing immigration:

The Democrats are laughing, because if Republicans join Democrats as the party of amnesty, we will lose. And you know, I understand that when the mainstream media covers immigration, it doesn’t often see it as an economic issue. But I can tell you, for millions of Americans at home, watching this, it is a very personal economic issue, and I will say the politics of it would be very, very different if a bunch of lawyers or bankers were crossing the Rio Grande, or if a bunch of people with journalism degrees were coming over and driving down the wages in the press, then we would see stories about the economic calamity that is befalling our nation.

When the press behaves as it did in 2012, it goes beyond mere media bias to outright betrayal of the trust vested in them by the First Amendment. Far from a sign of weakness, highlighting moderator bias and abuses shows that a candidate is stronger than a doormat being walked on. Media bias, if 2016’s vote proves anywhere near as close as 1976, could decide the outcome, and hence, per Bartiromo, is “fair game” for the GOP candidates to challenge.

John C. Wohlstetter is a senior fellow at the Discovery Institute and London Center for Policy Research, author of Sleepwalking With the Bomb, and founder of the issues blog Letter From the Capitol.

Hey Liberals, on Media Bias, Please Remove the Plank From Your Own Eye