In the Middle East, Trump Protected Christians, While Biden Got Them Killed 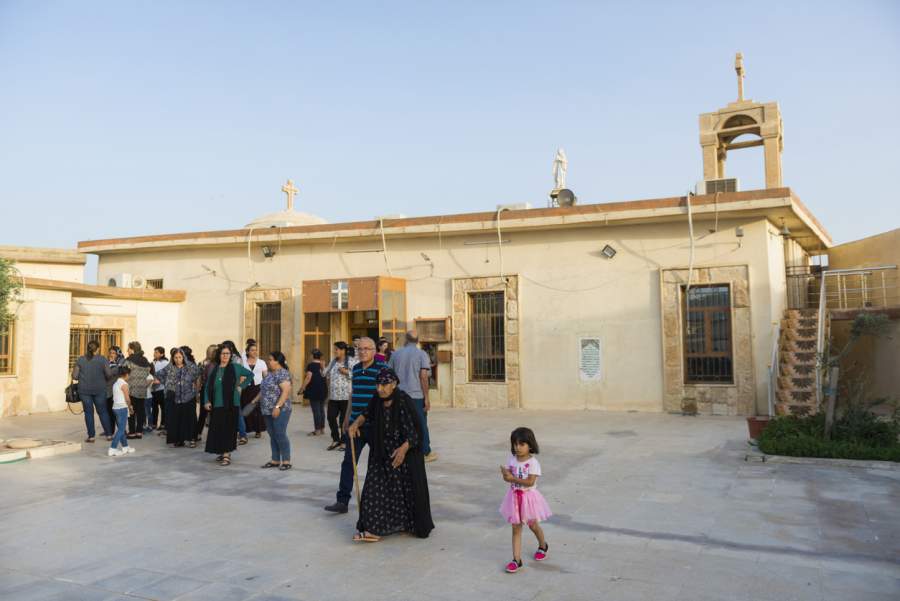 Koya, Iraq - May 14, 2017: Parishioners leave church at the end of a Sunday service at the Chaldean Catholic church in Koya, located in the Kurdish region of northern Iraq.

The following column appeared as part of a point/counterpoint on the candidates in The Chaldean News. That’s a magazine for Americans who belong to one of the Christian groups originating in Iraq, whose churches date back to the age of the Apostles.

Tonight’s presidential debate was originally supposed to be on foreign policy. So The Stream thought it worthwhile to offer this reflection on the contrast between the candidates, as their policies have affected persecuted Christians. It’s reprinted by permission of The Chaldean News.

There is no perfect candidate for president. Not this year or any other. As always we face a choice between two complex human beings representing diverse coalitions. We must choose which coalition has a worldview more compatible with our interests as a community, and which candidate seems effective at delivering.

On every important issue, Donald Trump and the Republicans offer more hope than Joe Biden and the Democrats.

The same military establishment that brought us so many useless, counterproductive wars from Iraq to Libya — hundreds of generals and armchair generals — is endorsing Joe Biden. Why?

Remember that Joe Biden strongly backed the disastrous U.S. invasion in 2003, based on bad intelligence and false promises of a transformed, democratic Iraq. Donald Trump was always skeptical of it, and said so. Much of the reason he won the nomination in 2016 was his rejection of the grandiose neoconservative theorists, corner office imperialists who liked to play at reshaping the world. Now the same military establishment that brought us so many useless, counterproductive wars from Iraq to Libya — hundreds of generals and armchair generals — is endorsing Joe Biden, and denouncing President Trump as “unfit for office.” Maybe he just doesn’t fit in with their plans.

Perhaps these militarists have not forgiven Trump for his stand in 2016, when he was one of the few candidates to oppose arming the so-called “moderate rebels” in Syria — controlled then as they are now by al Qaeda and other jihadists linked to Turkey.

The Obama/Biden administration did no more than the Bush administration had to protect Christians in Iraq whom radicals and bigots scapegoated for the aftereffects of that invasion. Indeed, it dismissed the murderous Daesh as the “junior varsity” team of Islamist terror. It ended the “surge” that had helped restore some order in Iraq, and finally pulled all U.S. troops out. That pullout helped create the power vacuum that let Daesh storm into cities, murdering thousands, and raping or enslaving thousands more. Did Joe Biden push for the U.S. or international forces to act to end that horror? No. He was too busy helping his family enrich themselves via U.S. foreign policy in China, Ukraine, and Russia.

What did end the horrible reign of DAESH? Firm, rapid action by the Trump administration, in partnership with experienced local forces — action the Obama/Biden team would never take.

The Obama/Biden years brought us the futile U.S. deal with Iran, which transferred unearned billions to that extremist regime, without meaningfully slowing its rush to gain nuclear weapons. President Trump, by contrast, has brokered successful, productive deals between Israel and several major Arab countries. These will help to contain Iran without the need for another destructive, disruptive war — whose side effects on religious minorities we can predict all too well.

The Trump administration has spoken and acted firmly in defense of religious freedom around the world, even as Obama and Biden banned Iraqi nuns from visiting the U.S., and skewed refugee quotas to favor Muslims who had safe havens over Christians who had none. The Obama administration even changed the description of the U.S. First Amendment taught to new citizens from the real language, “free exercise of religion,” to the bland “freedom of worship” offered to dhimmis by Islamists.

At home, the Trump administration wishes to protect the vulnerable, from unpopular religious groups to unborn children. Biden, by contrast, has promised to shut down the Little Sisters of the Poor, who care for the sick and dying, if they will not distribute abortion pills.

Trump stands for law and order on the streets of American cities like Detroit and Minneapolis. Biden will not rebuke the rioters who demand that police be defunded, and cities be turned over to armed militant gangs, which are burning small businesses as you read this. Trump will defend our Second Amendment rights and fund the police. Biden will seize our guns and defund the police, leaving American cities like Seattle and Portland to armed extremists, as the authorities once abandoned the people of Mosul to DAESH.

We’re happy to say that the Trump administration is working closely with representatives of the Chaldean community to address its particular interests and legitimate grievances. President Trump and I talked at length last night about the Chaldean community’s needs. As congressional candidate Eric Esshaki assured us, President Trump “fully understands the real threats our family members in Iraq face every day. Just as important he committed to find solutions to the deportation issue and make sure Chaldeans are treated fairly. He’s pledged to be a great friend to our community and has our back.”

Back in 2015, we wrote at the influential Christian website The Stream calling for a foreign policy that put “persecuted Christians first.” We believe that the Trump administration has listened, certainly more than any other U.S. politicians. That’s why we’re proud to back Trump’s re-election and ask for your support.