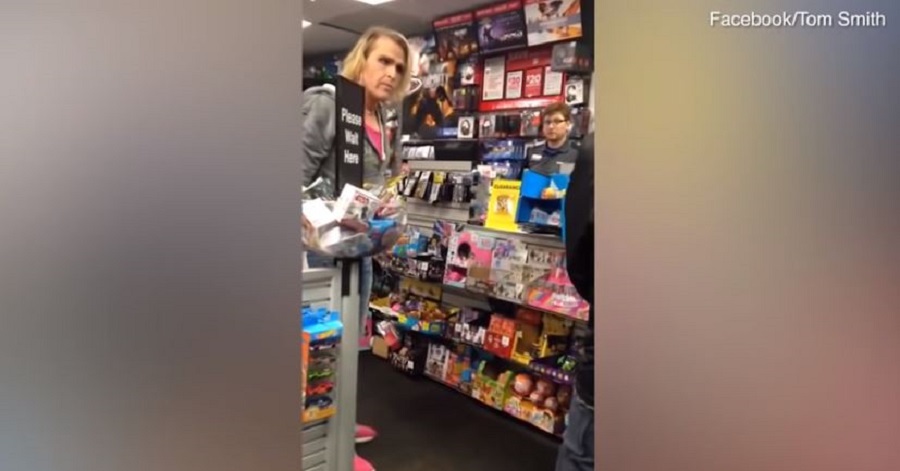 Amanda Prestigiacomo on the Daily Wire paints the picture.

The video starts with the trans individual cussing out the male GameStop clerk after being offered store credit rather than a refund.

“I don’t want credit, you’re going to give me my f***ing money back,” the customer yells.

A woman not in the view of the camera took issue with the trans person’s vulgar language.

“Excuse me, sir, there’s a young man in here — you need to watch your mouth,” she says in a calm voice.

The trans person instantly becomes aggressive, screaming, “Excuse me — it is ma’am! It is ma’am!”

The two customers interact, after which the trans customer resumes his attack on the cashier, who denies calling him “sir.”

To repeat the question: What’s wrong with this picture?

First, when you watch the video, it’s immediately clear that the customer is a man who identifies as a woman. He is sir by birth, even if he now identifies as female.

Listen to his voice and look at his face.

He can take hormones and grow breasts. He can surgically alter other parts of his body.

That still does not make him “ma’am.”

It is just to say that this transgender woman is not a biological female. This “sir” is not “ma’am.”

Second, listen to his challenge. It is the challenge of an angry male. “Take it outside! You wanna call me ‘sir’ again? I will show you a f***ing sir!”

Yes, young man, you call me sir and I will show you how much of a sir I really am! Let’s take this outside!

Again, this is not to deny that some women get into fights. Some do “take it outside.”

But overwhelmingly, this is aggressive male behavior. This transgender woman’s angry, inner male came roaring back to the surface when his femaleness was challenged.

This is as sad as it is ironic, and it reminiscent of another “transgender woman,” a male war veteran who now goes by the name “Zoey,” threatening Ben Shapiro when Ben asked him what his genetics were. Zoey put his hand on Ben’s neck, looked him in the eye, and said, “You cut that out now or you’ll go home in an ambulance.” Zoey’s inner-male rose up again!

This is also reminiscent of what happened to me when I was on the Tyra Banks show in 2010, discussing the issue of transgender children. Sitting next to me for the discussion was Dr. Marci Bowers, himself a male-to-female who is considered the rock star of sex-change surgery.

You’ll notice in the video that Dr. Bowers gently puts his hand on me a couple of times when making his points, similar to Zoey and Ben Shapiro, although in a non-aggressive fashion. It was what Dr. Bowers said to me before the show that got my attention.

I was chatting briefly with him and Kim Pearson, a heterosexual woman who is an activist for the transgender cause and was also going to be on the show.

Dr. Bowers said to me in a challenging voice, “Are you going to be able handle this?” (meaning, taking on the two of them on the air).

It didn’t dawn on me then, but as I flew home with my colleague, Scott, I said to him, “I just realized that Dr. Bowers gave me a macho challenge before the show!” On a certain level, he was calling me out. The inner male lived on.

During the show, Scott was sitting in the audience next to several other trans women, although they had no idea Scott was with me. One of them got so angry when I was speaking that he turned to his friend and said, “I wish I had brought a gun in my purse. I would shoot him!” How ladylike!

A Reminder Not to Collaborate with Social Madness

As we come to the end of 2018, it’s good to remind ourselves of these realities.

As much as we have compassion on those who genuinely struggle with their gender identity. As much as we do not minimize their pain. As much as we want them to find wholeness. We do not collaborate with social madness.

And I say that with all respect, sir.