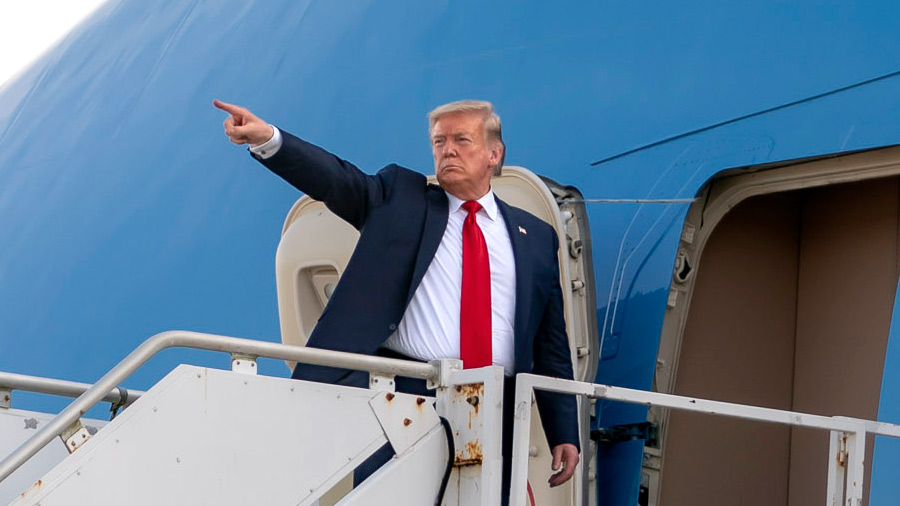 So President Trump has caught the coronadoom, and many cannot contain their glee.

An actor “said it’s ‘terrifying’ the people who thought President Donald Trump was a fascist yesterday are wishing the president well.” Actors have long been known as our most astute social and political commentators. Which is why we never fail to listen to them. And support them with an endless outpouring from our wallets.

There isn’t space to quote from all the people on the left who act as if the culture war we are in is, in fact, a war. Except to say that these folks should not act surprised if some day the favors are returned.

Some commentary on Trump’s condition is more refined, but speculative. There’s nothing wrong with this. Speculation is all we have; it’s all the President’s doctors have, as well. Doctors’ treatments for most diseases are in many cases nothing more than hopeful, but authoritative, guesses. The only sin against guessing is getting the uncertainty wrong.

The New York Times, for instance, speculates that

Mr. Trump’s persistent refusal to wear a mask may also change the course of his illness; if he became infected while his face was uncovered, he may have been exposed to a greater concentration of virus, which also raises his risk for severe disease, according to experts who have not examined him but were able to speak generally about patients like him.

We, too, have not examined Mr. Trump. But since the Times has set the standard of allowing uninformed commentary on the course of the President’s illness, we’ll do the same.

In both age brackets, then, Americans have about a ten times greater risk of dying from something other than COVID-19. But those in the older bucket are dying at rates about twice those in the younger bucket (from any cause).

Doug Axe, Jay Richards, and I explained in another piece that the president’s chances of recovery are very high. Here, let’s put that risk in perspective, to show how unhinged the hysteria is around COVID-19. Mr. Trump is 74. The CDC says that 1.2% people in his age bracket, 65-74, have died this year from causes other than COVID-19. It also says 0.13% of these people — ten times fewer — have died at least with, and not necessarily of, the coronavirus.

As long as we’re speculating, we might as well do so about Joe Biden, who is 77. In his age bracket, 75-84 years old, 2.9% of Americans this age have died so far this year of causes other than COVID-19. And 0.32% have died at least with the coronavirus.

In both age brackets, then, Americans have about a ten times greater risk of dying from something other than COVID-19. But those in the older bucket are dying at rates about twice those in the younger bucket (from any cause).

Which means what we always knew it means: Older people die more often than younger.

The difference here is that the president has tested positive for the coronavirus, and has been said to be experiencing “mild” symptoms.

The president’s weight is likely a strike against him. Based on an item from the Drudge tabloid, the Times speculated the President may also have other unreported comorbidities. We are thus free to speculate that his health before the infection is as reported by his actual doctors, which is fine.

Having comorbidities is never good. Of those who died with the coronadoom, about four times as many had other illnesses, 22% versus 6% with no comorbidities, according to the CDC.

But these aren’t the right numbers to use to judge the president’s prognosis. What we want to know is the infection fatality rate for people like him. Nobody really knows this number yet, since all the data are not in. Some estimate it as high as 4.2% for the President’s sex and age bracket.

But even that means a 95.8% chance of recovery.

Some estimate women do about twice as well as men. Thus, according to Gender Theory, if Trump changed his Mr. to Mrs., she’d have a better chance of survival.

Again, a better guess is to use reports from Mr. Trump’s doctors. On Saturday, Chief of Staff Mark Meadows at Walter Reed Medical Center said, based on reports from the doctors, “The president is doing very well.” He said he was “cautiously optimistic” about Trump’s progress, and that his symptoms were already “resolving and improving.”

And the latest report on Sunday is that he’s doing well and could be released on Monday.

Trump is going to disappoint and surprise a lot of people if he lives. But even the haters shouldn’t be surprised. He’ll be doing what the vast majority of people infected with this virus do: survive it.

Update: President Trump released a new video late this afternoon, looking and sounding fit as a fiddle. He then paid a drive-by visit to the supporters and well-wishers gathered outside Walter Reed.

President @realDonaldTrump drives by his supporters outside Walter Reed to thank them!pic.twitter.com/LlJr7umi8O

William Briggs is the author, with Jay W. Richards and Douglas Axe, of The Price of Panic: How the Tyranny of Experts Turned a Pandemic into a Catastrophe.