How Worried Should We Be for the President and First Lady? 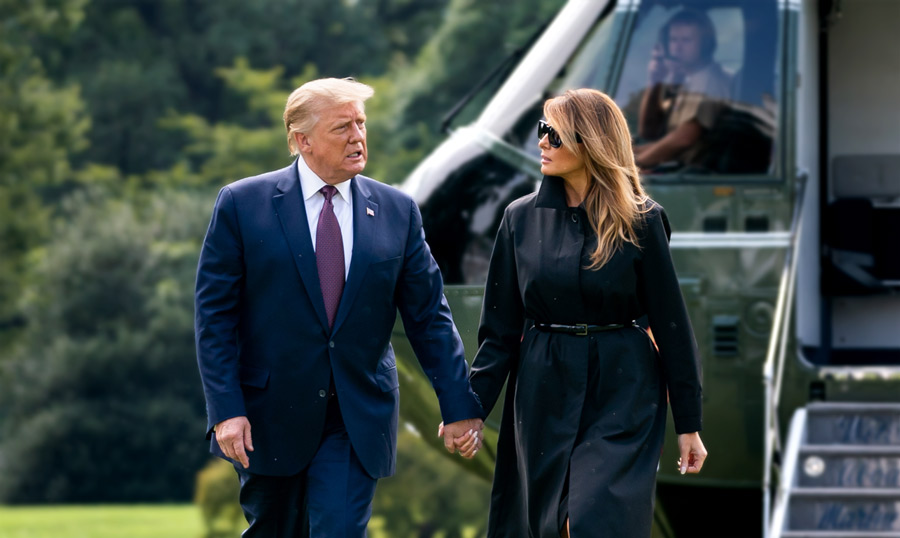 President Donald Trump and First Lady Melania Trump walk across the South Lawn of the White House on Thursday, Sept. 2, 2020, after visiting the Flight 93 National Memorial in Stoystown, Pa.

Just as we were starting to recover from the first presidential debate, news broke that President Trump and First Lady Melania Trump had tested positive for COVID-19. At the moment they’re showing only mild symptoms. But what’s their risk of serious illness, or even death?

If you’ve followed the news of the pandemic, you know that the coronavirus poses a much greater danger to elderly people, especially those who are otherwise ill. President Trump is 74 and Melania Trump is 50. Both are in good health, though the president is clearly heavier than he should be. Still, to judge from his energy on the campaign trail, he seems robust.

At the moment, though, the best we can do is look at the statistics.

One simple way to measure their danger is to look at the fatality rate for this bug — based either on infections or cases. We spend a lot of time on this in our forthcoming book The Price of Panic. We’ll just boil it down here.

The infection-fatality rate (or IFR) is simple in principle: Take the total number of people who have died from the bug and divide it by the total number infected by it. That’s easier said than done, since there’s no easy way to count the infections. Test results give us one number. But that number always depends on another, highly variable number: how many people have been tested.

The case-fatality rate (CFR), in contrast, is simple in practice but more ambiguous in definition. The number of dead is the same, but now that’s divided by the number of infected people who have become “cases.”

What’s a case? Well, someone who shows up at the hospital to be treated, usually. But cases in the COVID-19 pandemic aren’t like that. They’re a mix of people who show up at hospitals and those who show up at testing sites. Some don’t show up at all. That is, some sick people are probably too afraid to seek treatment, so they stay home and are never counted. How many? Nobody knows.

If reported deaths are too high — for example, if many who died with and not from the virus are classified as COVID deaths — then the case-fatality rate will be too high. Undercounting or under-reporting the actual cases would also make the rate too high. The numbers reported by the media over the last several months probably contained both problems.

More relevant than the case-fatality rate is the infection-fatality rate. This is the number that might tell you how likely death is if you catch the virus — sort of. The problem is that, for months, most infected people weren’t tested because they had few or no symptoms.

What’s the real infection-fatality rate, then? Right now, no one knows for sure. Experts using intelligent sampling of the data, such as verified autopsy reports, will estimate it later.

Still, some studies have already commenced. One put the “infection-fatality” rate “of symptomatic patients” at a whopping 1.3%! But that’s not a real infection-fatality rate; that’s just another way to state the case-fatality rate. Why? Those who were infected but didn’t have symptoms weren’t counted in the study.

Other studies yielded case-fatality estimates as low as 0.3%, which means the infection-fatality rates must have been lower still. The case-fatality rate for the flu is about 0.1%. Based on those figures, we could say COVID-19 is three times deadlier than the flu — if you become a “case,” that is. Right now, though, there’s a lot of ambiguity about what makes a COVID-19 case.

So, if the COVID-19 case-fatality rate was around 0.3% to 1.3%, then, using the rhinovirus estimates as the lower bound and the larger MERS estimate for the upper bound, the infection-fatality rate is likely around 0.15% to 0.26%.

Based on the cold statistics alone, Melania Trump easily has over a 99% chance of recovery, and President Trump has about a 94% chance.

Of course, that range applies to the population as a whole. The risks go up with age and declining health. As of September, the CDC numbers match our own estimates. They suggest the following survival rates for different age groups:

Based on the cold statistics alone, then, Melania Trump easily has over a 99% chance of recovery, and President Trump has about a 94% chance. But their cases were caught early. They’re also in good health and have access to top health care. As a result, we’d guess that their odds are much better than that.

So, long story short, there’s no reason to panic. But there’s still plenty of reason to pray for their fast and complete recovery.

Jay W. Richards, Douglas Axe and William Briggs are the authors of The Price of Panic: How the Tyranny of Experts Turned a Pandemic into a Catastrophe.