I Refuse to Say ‘I Identify As’ — Here’s Why 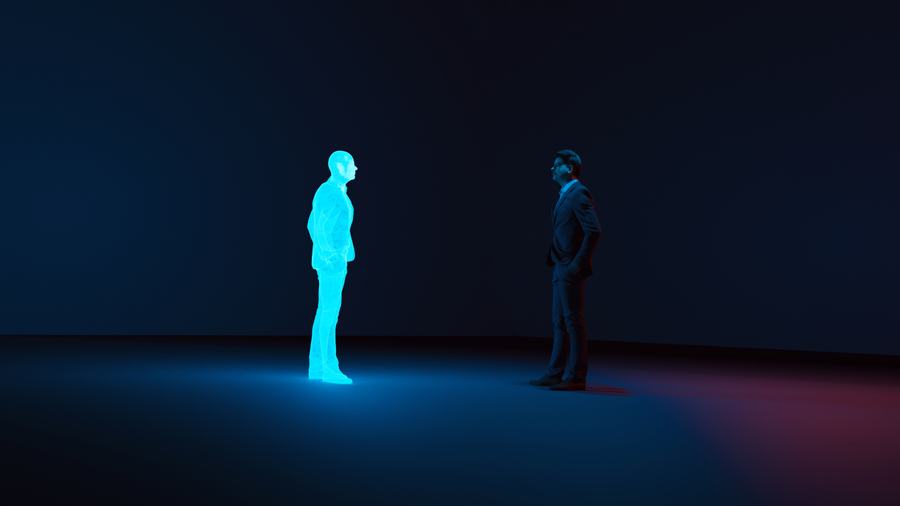 I refuse to say I “identify as.” Period. I won’t “identify as” anything. If I’ve said it in the past, I repent of it. If you ask me what I identify as, I’ll give you an answer shows what’s wrong with it, and the best way I know is by playing stupid on you. Like this:

“Usually I use my driver’s license for identification.”

“No, that’s not what I mean. What gender and sexuality do you identify as?”

“My name’s Tom Gilson. Didn’t you know that already?”

“Oh, come on, Tom. You know what I’m asking for. I’ll say it again: What gender and sexuality do you identify as?”

“Serious? You mean you can’t tell those things just by looking? I’m standing right in front of you. I have a light complexion, wide shoulders, an Adam’s apple, a beard, a low voice, and a distinct lack of curves. You can see that, right?”

“Yes, of course I can see that. I can also hear you saying you’re not going to answer my question.”

“Exactly. How perceptive of you!”

“It’s okay, though. I’ve got you figured anyway. You’ve told me your choice as clear as if you said it out loud: Cisgender male, straight.”

“Choice? Did you say ‘choice’? Where in the world did you get that from?”

It’s In the ‘Choosing’

Choice: That’s exactly where “identify as” goes wrong. Virtually every time people say “I identify as,” it’s short for, “I choose to identify as … .” And their choice is either to “be” something they aren’t, or else they’ve chosen to be what they already were, as if their choice explains how they got that way.

Sometimes — though rarely — it’s legitimate to choose. I could choose to identify myself either as an author, a writer, or both. The truth of it depends on whether my work consists more in books I write, or in columns such as this one. In this case I actually do have a choice about it. I really do write books and articles, there really is a fine distinction between “author” and “writer,” and my work lands me somewhere near that line. So it’s a coin toss. Or a choice.

So yes, we have choices. We can choose evangelical Christian belief, or conservative politics, or (shudder!) to be a Yankees fan. And if I’m saying “choice” is the problem with “identify as,” wouldn’t it be okay to “identify as evangelical”?

I think not. Not these days, especially. There are still problems with it, even where choice is real. I’d group those problems under identity politics, language, and reality.

Identity politics is a toxic mode of civil discourse that squashes complex realities into tiny little categories and calls those categories ultimate. The effects are ruinous.

Take racial politics, for example. The problem with it isn’t that racial issues aren’t real. They are. But identity politics treats race as if that’s virtually all that’s real. Relationships, geography, education, family circumstances, physical and mental health, spiritual beliefs and maturity, and all the other complexities of life may get a head-nod, but no real attention. “Yes, yes, we know about that. Can we get back to the racial question now, please?”

“Identifying as” has a totalizing effect, as if race is all that really matters. The same goes for sexual preference and “gender identity,” both of which have been lifted to near-absolute importance. The ironic thing is how many absolutely important categories that gives us: race, sex, gender, sexual preference, ethnicity, religion, and on it goes. No one’s “identity” could possibly rule our policies and politics, but that doesn’t keep people from trying.

There’s one completely predictable outcome when identity becomes absolute: It divides us. Intersectionality doesn’t mean meeting at the intersections but erecting barriers there. Inescapably it produces politics of antagonism and suspicion.

I don’t want to give aid and comfort to identity politics in any form. If there were no other reason to resist using “identify as,” that by itself would be enough.

The Language of “Identify As” 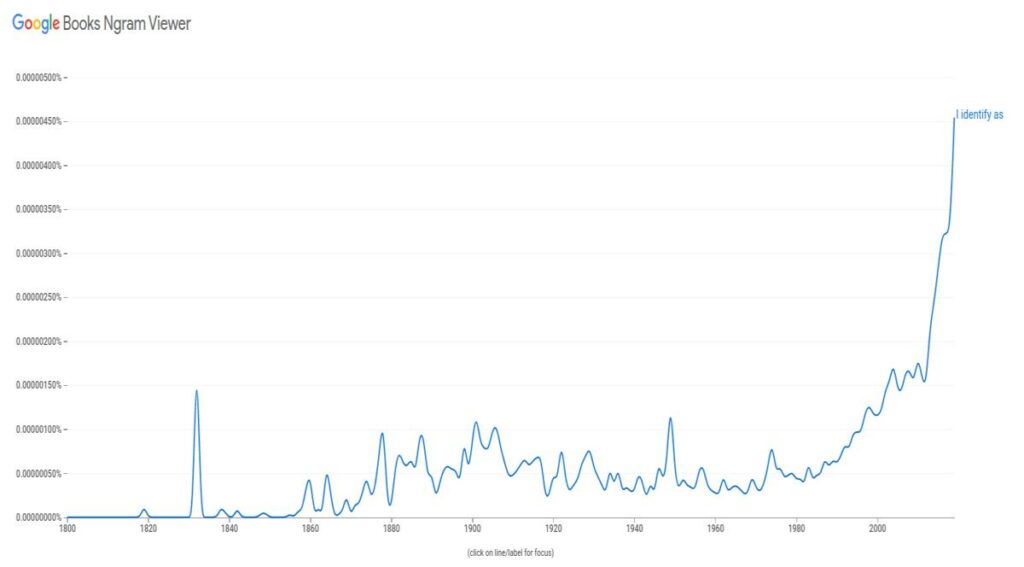 Yet there’s more. This business of “identifying as” does serious damage to language, and that’s a bigger deal than we might give it credit for. Without language there is no communication. Based on Judge (now Justice) Ketanji Brown Jackson’s Senate testimony, we no longer have word to communicate the concept “adult human female.”

People got a good laugh out of Ketanji Brown Jackson’s answer that day, and rightly so, for there was comedy there. But the humor came with a dark fog of death swirling around it: the death of human communication. She was quite literally informing us that we cannot talk about whether she or any other person is a woman. Biologists can speak of it, she says, but they already have, and see how much good that’s done us?

The language of “identify as” says, “Forget what you thought this word meant. I’m telling you it means something else.” Communication suffers, and human connection suffers along with it.

It’s interesting, by the way, to see how needless this phrase “identify as” really is. Google’s Ngram tool counts the use of this phrase in books from 1800 through 2019. We got along without that phrase for centuries, right up through the first ten years of this century. (That steep climb began in 2011.)

The language of “identify as” also degrades communication by taking interesting topics off the table for discussion. A man who says “I identify as a woman” is making a statement of fact. He could be lying about it, he might be confused, or he might be speaking the truth. Either way, he’s speaking a non-debatable truth. What I mean there is that if he identifies as a woman, then he identifies as a woman. There’s nothing arguable about it. We have to take his word for it.

He can identify as a woman, but I can’t “identify as” a person who’d like to have his views heard, too. We can’t have the conversation. That’s ruinous to human connection, too.

And finally, the biggest problem of them all: Reality. No man can identify as female without bumping hard into other realities. It’s no different than if I were to identify as an electrician or a plumber. Reality intervenes. If I tried practicing those trades, I’d burn down one house and flood the next.

“Identifying as” the other sex means nothing less than telling reality itself, “Sit down. Shut up. I’ll do the deciding from now on.”

And reality has a way of being in charge of us. Rightly so, too. Those of us who believe in God know this as another way of acknowledging that God Himself is in charge. Those who don’t believe in God should at least recognize that reality rules. It’s not good enough for me to hold two wires in my hand and simply “identify” them as safe to touch together. I need to know where each of them is really connected on the other end.

When a person “identifies as” something he isn’t, what he’s doing is telling reality he’s in charge instead. That’s not just foolish, it’s unspeakably arrogant. I’ve written before of transgender bullying. Then it was a man bullying women by claiming he was one. This bullying is different is different: It’s just as real, but more foolish by far. “Identifying as” the other sex means nothing less than telling reality itself, “Sit down. Shut up. I’ll do the deciding from now on.”

These people would be wiser to take Jim Croce’s advice : “You don’t tug on Superman’s cape. You don’t spit into the wind … ” And you don’t mess around with reality. It’s bigger than we are. Wiser, too. You and I and everyone else might be confused about whose identity rules reality. Reality has no such problem; it knows what’s real. God knows.

What To Say Instead

Granted, not every use of “identify as” goes as far as trying to push reality around that way. I could “identify as evangelical” without rattling reality’s cage. So it isn’t necessarily wrong, in other words. But it’s so closely connected with serious wrong, I’ll keep my course steered far away from it. I advise you to do the same.

There’s nothing hard about it, after all: If someone asks if you or I “identify as’ a man or a woman, as Black, white, Native American, or whatever, all we have to do is speak the truth in plain language. “Yes, that’s what I am.” When they ask if you identify as a teacher, musician, engineer, office manager, CEO, military officer, or (again) whatever. Just say yes. Or no. Or “I aspire to be.”

Just speak the truth. Speak it using shared language that reflects the shared reality we all live in.