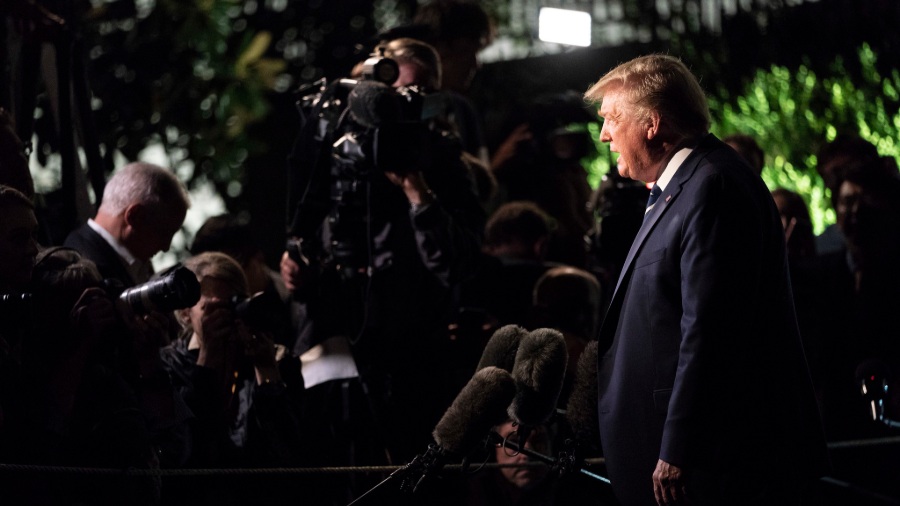 I imagine I’m not the only one this happened to, but still, you hate to see it happen at all. You express your support for Trump on a given issue, and an old friend or acquaintance dumps you. That’s how fiercely they oppose — or even despise — him. How do we best navigate these turbulent waters?

That means they see my many posts about controversial cultural issues, like abortion and LGBT activism, and they do not unfriend me.

Others, not surprisingly, did unfriend me along the way, which I fully understand. We weren’t super close, and they didn’t appreciate my views. All clear.

But one in particular, whom I had known since elementary school, somehow stuck around, and every so often he’d post a nice comment to a family update or the like.

Unfortunately, the day came when my support for the President on a particular issue was more than he could take, and that was the end of that.

I wasn’t offended, but I hated to see it happen.

More recently, another childhood friend, named David, posted this in response to one of my Trump-related articles:

How can any Christian support such an immoral and divisive man? He’s broken every commandment and has committed all Seven Deadly Sins. Ask yourself two questions….would Jesus support such behavior?
Would Jesus treat illegals the same way?
The answer is no to both questions and I question your commitment to Jesus if you support Donald Trump.
Instant redemption is bull as Trump never seems contrite in his poor decisions.

It appears that the order of the day is to fight fire with fire, offense with offense. You blast me and I blast you. Forget about substance. About content. About details and facts. And forget about conducting ourselves in a godly manner. Not a chance. Fire away!

But the Book of Proverbs has a relevant word for us here: “A gentle answer deflects anger, but harsh words make tempers flare.” (Proverbs 15:1, NLT)

I knew his life experience and faith perspectives were very different than mine, and personally, I was glad to see he was still a Facebook friend, despite our differences.

You definitely represent the concerns of many others, especially non-Christians. Here’s the short answer: 1) Donald Trump is NOT our Savior, and for many of us, he was the last choice of the Republicans running for office. But a vote for him was a vote against Hillary, who we believed would be a disaster for our country. 2) While the issue of migrant children is a serious one and needs to be addressed, for us, slaughtering one million babies in the womb [each year] is a massively bigger issue. The brutal and horrific slaughter and torture and displacement of millions of Christians in the Middle East by ISIS and other Islamic militants is a massively bigger issue. The possibility of Iran getting nuclear weapons to attack Israel fits in this same category. And these are just some of the biggest issues to us. That’s why we voted for Trump. We felt Hillary would be on the wrong side of all of these. As for immigration, remember that Obama deported far more illegals, at this time in his presidency, than Trump, and the problem of separating children from parents has existed for years before Trump. Christian supporters of Trump simply need to make clear that we want something done that is compassionate and fair. 3) When we excuse Trump’s sinful behavior, we discredit our own witness. I agree. But we do NOT compromise our Christian witness when we say, ‘We deplore his past, playboy lifestyle, and we hate his crude and ugly attacks against others, but out of the choices for president in 2016 (or, potentially in 2020), we believe he’s the better choice.’ I encourage you to think this through. God bless!

And how did David respond on Facebook? He wrote:

Michael, thanks for the answer. As you know, we have many issues facing us as a country and as religious groups. There are no easy answers. I’m not sure if prioritizing our response based on religious views is the answer.
It saddens me to see not one of the responses I got from people here address my two questions about Jesus approving of Trumps actions. I see a herd of Trump apologists who cherry pick their Christian values.
Michael, I admire you as a person, you serve a very important role in today’s world. Keep up the good work you do! Be well!

I responded, “Thanks for the kind words. This is the kind of interaction we all need. Much appreciated! And keep raising your voice when you want to weigh in. I always welcome respectful differences of opinion.”

As of today, David and I are still Facebook friends (David, I hope you’re reading this! If you are, encourage Robert to rejoin us!). And the point of me posting this is not to say, “Look at how wise my interaction was!”

The point, instead, is this.

And then, rather than dismissing those concerns as if they were baseless — is that how we want our concerns treated? — to share our point of view with clarity and grace.

In the end, rather than losing friends over views about Trump, we just might gain some.

Hey, it can’t hurt to dream.