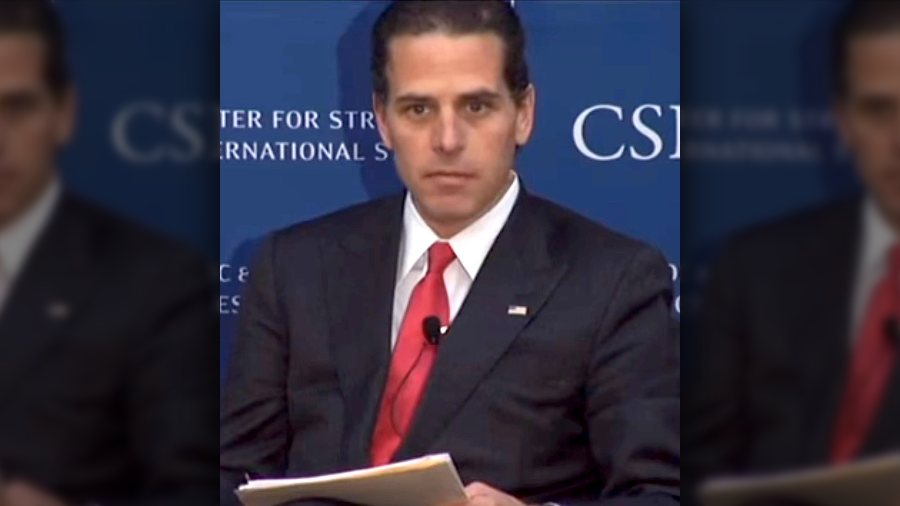 The documents from that laptop aren’t gossip, fake oppo research, or “Russian disinformation.” They’re pieces of tissue pulled from our body politic and sent out to oncologists for testing. The results all came back positive: America has cancer in multiple organs of government, law enforcement, and media. And rogue cells have flooded the White House.

Not Throwing the First Stone

I don’t want to talk about Hunter. Not as a person. I’ve no prurient interest in the sins of tortured souls. Better to leave such accusations to the Accuser. While as citizens we must know about what Hunter did on his father’s behalf, as Christians we should pray for his conversion, before it’s too late.

Hundreds of hours of videos and images show a man hooked on hard drugs, prostitutes, and likely victims of human trafficking. I feel mostly pity for a man whose own dad used him as the bag man for corrupt international dealings with the slave-owning Chinese Communists. And Central Asian oligarchs. And a long list of other bad actors who Hunter feared would kill him. And some of them still might.

In what the laptop exposes as the Biden crime family, Hunter was treated like Fredo in The Godfather I & II. There are emails to family members on his laptop that recall Fredo’s famous plea to Michael Corleone: “I can handle things! I’m smart! Not like everybody says, like, dumb. I’m smart and I want respect!”

Set aside the profound national security implications of a vice-presidential scion doing business with Red Chinese spies, and what you have is a human tragedy.

Dozens of CIA Veterans Lied to Cover for Biden, or China

Look for more than a minute with non-partisan eyes at the staggering greed and cynicism of the Biden family business, and the tragedy goes national. Remember that dozens of retired CIA and FBI and other national security professionals knowingly, consciously lied about the laptop’s contents. Why? To swing an election. And that virtually no media in America apart from The New York Post and Fox News would even report facts well-established at the FBI itself.

Then you start to get scared. You wonder just how much our FBI has turned into a kind of East German Stasi, and our media morphed into Pravda.

I won’t rehearse the facts here. Go download the laptop’s contents and judge them for yourself.

Or read the Post’s reports, most of which the Biden campaign just ignored, but never denied. Or watch Tucker Carlson’s interview with Tony Bobulinski, Hunter’s old business partner. In ignorance of these facts, millions of Americans voted for a nominee subject to blackmail over past bribes to multiple hostile regimes and international criminals.

Or read what the FBI had to say about the authenticity of the laptop’s contents. It’s beyond dispute. They’re real, unlike every single particle of manufactured “evidence” for Trump’s “collusion” with Russia. And Jack Maxey, a journalist and one-time TV commentator for Steve Bannon’s War Room, thinks Americans deserve to know the truth.

I interviewed Jack, a friend, on behalf of The Stream, about his decision to release all this material. I was all set to publish a transcript here, but then something happened. The great Eric Metaxas, at my suggestion, interviewed Jack on the radio and on video. He asked better questions than I had, and teased out much more. So instead of reading my interview, I invite you to go watch Eric’s. Say a prayer first, and get your kids out of the room, because dark, dark stuff emerges. (This includes warnings from ex-spooks that Maxey’s life is in danger.)

Whom Can We Trust Now?

After you watch it, consider the following questions, and their implications for our country:

We owe Jack Maxey our thanks, along with John Paul Mac Isaac. He’s the brave computer store owner who distrusted the FBI enough to send a copy of the Biden laptop’s contents to Rudy Giuliani. We owe them our prayers for their safety.