How I Educated Dr. Neil deGrasse Tyson on Rudolph the Red-Nosed Reindeer 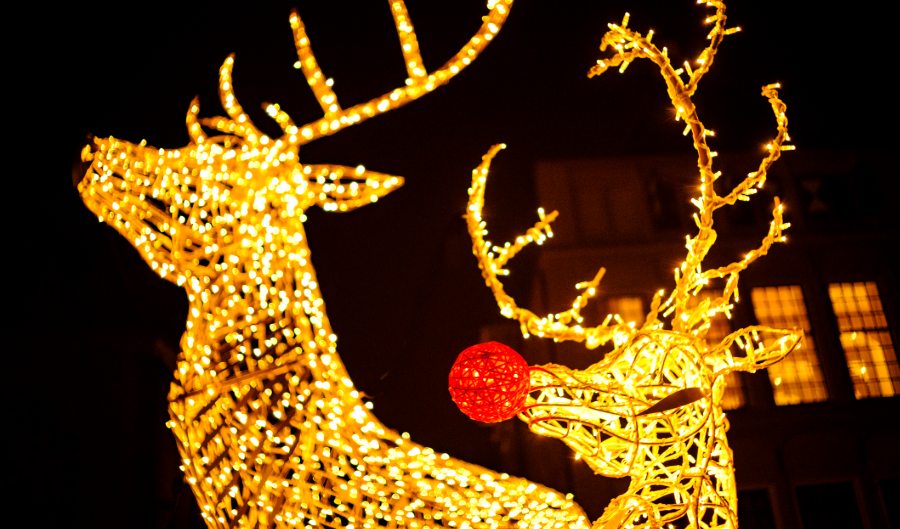 It was late on Christmas Eve when I happened upon a story with this headline: “Neil deGrasse Tyson: Santa ‘Doesn’t Know Zoology,’ Rudolph Was ‘Misgendered.”’ Intrigued, I clicked on the link, which then took me to Dr. deGrasse Tyson’s tweet, which was absolutely devastating. It read:

Both male & female Reindeer grow antlers. But all male Reindeer lose their antlers in the late fall, well-before Christmas.

So Santa’s reindeer, which all sport antlers, are therefore all female, which means Rudolf has been misgendered.

Rudolph, misgendered? How could it be? Santa not knowing zoology? I was crushed and disheartened beyond words, feeling as if all my hopes and dreams lay in shambles at my feet. What was I to do?

And what about the hundreds of millions of others — no, billions of others — who were likewise feeling devastated and crushed? After all, this learned astrophysicist with a Ph.D. from Columbia had the courage to tweet this out on Christmas Eve at 8:48 PM. How fiercely the arrow struck!

I Was at a Loss

Immediately I took to action, but with one major handicap. I am neither an astrophysicist nor a zoologist. How could I challenge a preeminent scientist like Dr. deGrasse Tyson?

My Ph.D. is in Near Eastern Languages and Literatures from New York University, which did not directly intersect with this tweet. Neither did my decades of biblical research help me in this battle, nor my years of preaching and teaching.

I’m not even a hunter, like my son-in-law Jimmy. At least he has firsthand knowledge of deer and the like.

I was at a loss, the odds were stacked against me, and the clock was now approaching midnight as I wrote. Surely there had to be some flaw in his reasoning.

I did notice that some others were offering a challenge (or, at least adding in their two cents), but they were in the form of tweets as well, thereby lacking substance and depth, such as this reply: “Otherwise though the glowing nose part is excellent science.”

Another had more substance to it, offering a powerful insight: “It’s Santa, the guy defy the law of physics and fly on a sledge, comes down to house from a chimney. He must have some tricks under his sleeves to give male reindeer antlers during Christmas.”

How intriguing. … And then, the light on when. I had solved the riddle. I had refuted the brilliant astrophysicist. I had saved the reputation of Rudolph (who was not, as Dr. deGrasse Tyson claimed, originally named Ruby or the like).

Not only so, but no sooner had I made the discovery, tweeting my find to meet the midnight deadline, but I found confirmation for my conclusion in another tweet, which I’ll share with you shortly.

You see, one thing I learned in my decades of study is how to do careful research. Also, with my debating experience, I have learned to dissect my opponent’s position carefully, often revealing fatal flaws.

In this case, Dr. deGrasse Tyson overlooked the obvious, because of which he failed to look at the primary sources — the documents that tell the story in the original languages. In this case, he missed the forest for the trees.

In short, I did an extensive (but hurried) online search under the Latin heading “Tarandro Volantes,” which then led me to the famed German journal, Zeitschrift für die Gesellschaft für das Studium von Tarandro Volantes (Journal for the Society for the Study of Tarando Volantes).

In this case, Dr. deGrasse Tyson overlooked the obvious, because of which he failed to look at the primary sources — the documents that tell the story in the original languages.

Delighted to see that it was archived online, I then searched for “antlers, shedding,” and, voila, there I found it. The definitive article on the subject, written by the leading scholar in the field, and published in the leading, peer-reviewed journal on Tarando Volantes. It was written by Herr Prof. Siegfried T. Klaus (no relation to Santa), and he demonstrated that the male species of Tarando Volantes which hailed from one particular part of the world did not, in fact, shed their antlers in late fall.

Dr. deGrasse Tyson was wrong! Santa did know his zoology after all.

As I tweeted at 11:34 PM (giving the world some breathing room), “Sorry, @neiltyson, but you blew it BIG TIME here, failing to focus on 1 particular type of reindeer which hails from 1 specific location. Among these, male reindeer do NOT lose their antlers in the late fall. Yes, I’m speaking about FLYING REINDEER which hail from the N. Pole. :)”

Yes, he failed to look at the antler-cycles of Tarando Volantes (flying reindeer in Latin) from the North Pole, hence his embarrassing, very public miss.

You can only imagine my delight when I discovered confirmation for my findings in another, earlier tweet, which stated, “Neil, you forget the most important thing, these are not ordinary reindeer, they are magical flying reindeer. The male magical reindeer retain their antlers until after the 1st of the year.”

And that is how I helped to save the reputation of Santa (and Rudolph) in 2020. It was the least that I could do.