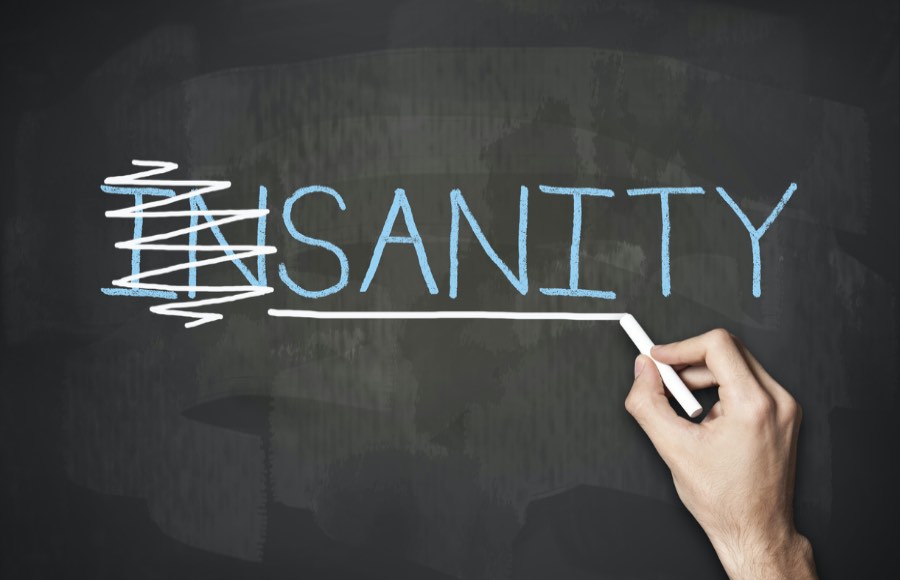 Major American cities are thinking of de-funding their police forces. The Supreme Court has just ruled that sex isn’t real in the eyes of the law.

What we’re facing in both cases is lunacy. I don’t mean it’s like lunacy, or it reminds me of lunacy, or it’s lunacy in some figurative sort of way. I’ve already made the case for transgenderism as “the fastest growing insanity the world has seen. Police-free cities are so obviously impossible, it’s madness even to try. So if insanity means being dangerously disconnected from reality, then what we’re dealing with here is the real thing.

So what do we do? What’s our strategy now? Is it even possible to strategize against insanity? The answer is clear: It has to be possible. Either that or we just give up. That, or else we flail against the madness to no effect. I don’t know about you, but I’m not giving up, and I’m sure not interested in wasting energy on useless efforts.

And besides that, yes, I believe it’s possible to build effective strategies, even against this lunacy.

Let me draw an analogy. Suppose the kingdom of Suarobia successfully invaded America’s east coast and took over the city of Boston, and they planned to use that as a beachhead to conquer the whole country. What would we do? We’d have all kinds of counter-actions we could take, from counter-invasions to surgical air strikes. But whatever we did, we’d be guided by just a few timeless strategic principles: protect, contain, and defeat, using all available resources and all possible intelligence.

To flesh that out just slightly, our first priority would be to protect Americans in and around the city. Our second main task would be to contain the threat so it wouldn’t spread. Third, we’d find a way to defeat and drive the Suarobians out. That doesn’t mean doing one after the other; we’d work all three prongs of strategy at the same time.

Throughout all this, we’d have intelligence agencies working at top speed to understand the Suarobians and their own strategies. And it wouldn’t just be the concern of specialists in the military; the whole country would immediately go on a wartime footing.

But Do We Believe Real Strategy Is Possible?

I’ve got future articles in the works for each of those five facets of strategy. For today, though, I must stay focused on the question I started with: Is it even possible to strategize against this madness? More to the point, do we believe it’s possible?

I look at today’s church, and what I see suggests most of us think the answer is no.

Some of us say no by capitulating. The easiest way to stop lunatics from saying nasty things about you is by joining them in their madness. It’s a literally lunatic answer, though.

Some say no by going numb. They’ve lost all hope. They’ve decided the culture is too far gone, there’s nothing they can do about it. So they’ll just do church for themselves, and let the rest of the world go to hell.

Some say no by taking a theological turn with it: “God didn’t mean us to solve the world’s problems. Our job is just to share the simple gospel.” It’s horrible theology, though. They should read the prophets.

Some are so focused on hoping Jesus will come back and solve everything for us, they forget we’re His body, established here on earth to do His will.

Others may be properly alarmed, but they don’t have a clue what to do, so they’ve got nothing to show for it but worried frowns over coffee in the fellowship hall.

In other churches you can find a small group that’s seriously involved, possibly even with good strategy. But they’ve been pushed off on the side, without support of senior leadership. It’s as if the church thought they were the ones who should be contained; as if the rest of the church needed to be protected from them.

The Gates of Hell Will Not Prevail

Only in the rarest of churches do you see a broad, integrated response, keeping the gospel properly at the center while taking effective action against the darkness.

This is where every church should be. We’re at war. I’ve called it insanity, but let me describe it in other terms you should recognize: Confusion, lies, deceit, and false, worldly answers. We know where that comes from, right?

The church’s chief enemy, who specializes above all in lies and confusion, sits on a dark throne behind the gates of hell. Jesus Christ promised us that these gates would not stand against His church. That’s a clear commission: He wants us to march against those gates.

And I think He wants us to do it strategically, purposefully, effectively. The enemy only laughs when he sees us milling around aimlessly outside his walls. Let’s unite against the madness he’s sown. Let’s do it thoughtfully. Effectively. Prayerfully. Strategically.

Yes, it’s possible to strategize against the madness. I’ll be back with more.

Observations From My Visit to CHAZ in Seattle