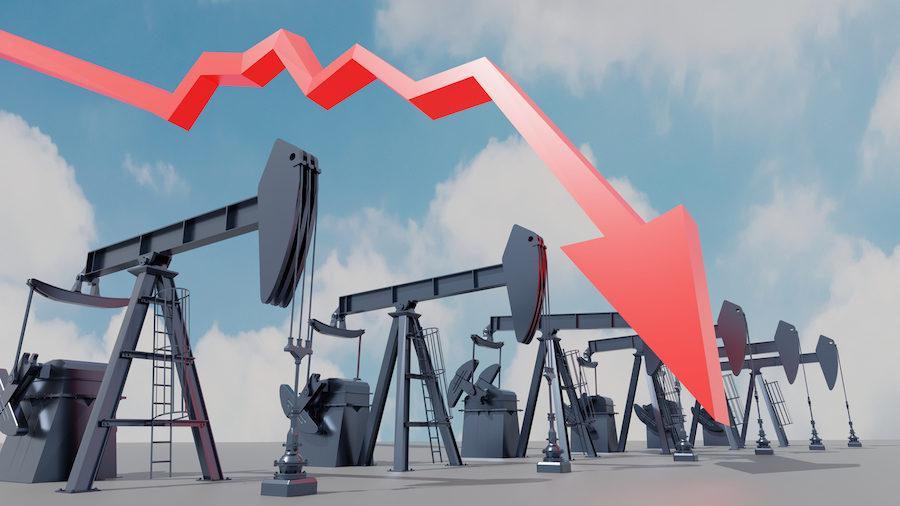 The price of oil has dropped to historic lows. Thanks to the coronavirus, world demand dropped far more than anyone could ever have predicted. No demand, no buyers. No buyers means sellers have to pay people to take the oil off their hands.

The world’s stock markets tumbled at the news. Some predicted world depression. Were they right? Probably not.

On Monday, a key oil futures contract that was expiring went negative. In futures trading, investors contract to buy a commodity in advance at a set price. When it comes due, they hope to sell it on to someone and make a profit. Refineries will often use futures to ensure profitability on their production. But with few people traveling by car or plane, the refineries already have far more oil in storage than they need. Customers aren’t buying any more.

Exacerbating the problem has been a price war between Russia and Saudi Arabia. Both have produced more oil than usual lately to drive down the price.

Never before has the price gone below zero. At one point this week the price reached minus $37.63 a barrel — meaning that instead of making money, traders have to pay someone that much to take the oil. It happened to the oil company West Texas Intermediate, whose benchmark is considered the key gauge of U.S. crude prices. It’s a high-quality oil that’s easily refined.

Why is this a problem? The U.S. oil industry directly or indirectly employs 10 million people. Companies can’t keep employing everyone if no one’s buying their product. And some smaller oil companies are expected to file bankruptcy in the coming months. Some companies are already laying off workers. Latshaw Drilling has laid off 300 of its 500 employees in the last few weeks.

But it’s not as bad as it seems.

The Free Market Will Adjust

The price of West Texas Intermediate for May delivery recovered a little the next day, to $10 a barrel. That’s a rise of almost $50. Futures contracts for June and July are trading at even better prices. European oil markets have already started to bounce back.

The downturn is only temporary. President Trump’s top economic advisor, Larry Kudlow, said the price of oil will rebound as the economy starts to reopen. “We’ll come out of this soon, the economy will reopen. It will, I hope, take care of itself. Markets will take care of themselves over time.”

Some companies have taken advantage of Small Business Administration loans. Texland Petroleum, for example, received one to pay its workers for two months. The demand and the need for workers should likely have recovered by then.

Things are expected to turn around in the near future. In fact, John Kilduff of Again Capital told MSNBC, “The higher priced, longer-dated futures contracts are indicative of the market expecting some level of clearing in the cash market over the course of the next several months.” This is due to OPEC cutting back production and a decline in U.S. oil rigs.

Things will get better, John Kilduff, partner with Again Capital, told CNBC. The improvement so far “shows that market forces are much more effective than oil policy that is directed from on high.”

However, things are going to be tough for oil exporting countries, which are heavily dependent on the revenues to keep their economies going. In the U.S., the oil industry needs to get at least $48 per barrel in order to survive. Right now, it’s at less than $14 a barrel.

Trump is considering blocking foreign oil imports in order to prop up the U.S. oil industry. Sen. Ted Cruz (R-Texas) tweeted that the Saudis need to turn their tankers around instead of delivering the oil here.

We will never let the great U.S. Oil & Gas Industry down. I have instructed the Secretary of Energy and Secretary of the Treasury to formulate a plan which will make funds available so that these very important companies and jobs will be secured long into the future!

Trump is considering a stimulus, but Democrats oppose any stimulus funds for the oil industry.

Trump brokered a deal where OPEC and Russia will cut 9.7 million barrels a day as of May 1. While the U.S. did not join in the agreement, it is already beginning to cut oil production.

Trump is also considering imposing tariffs on foreign oil. He may also fill the Strategic Petroleum Reserve. However, critics say this would make very little difference. It’s too negligible a fix.

While it’s true that some of the developments taking place in the oil industry sound pretty awful, it won’t permanently destroy the industry. It probably won’t drastically change it. Yes, some oil companies will go out of business and employees will lose their jobs.

Businesses Not Reopening Because They’re Afraid of Being Sued?