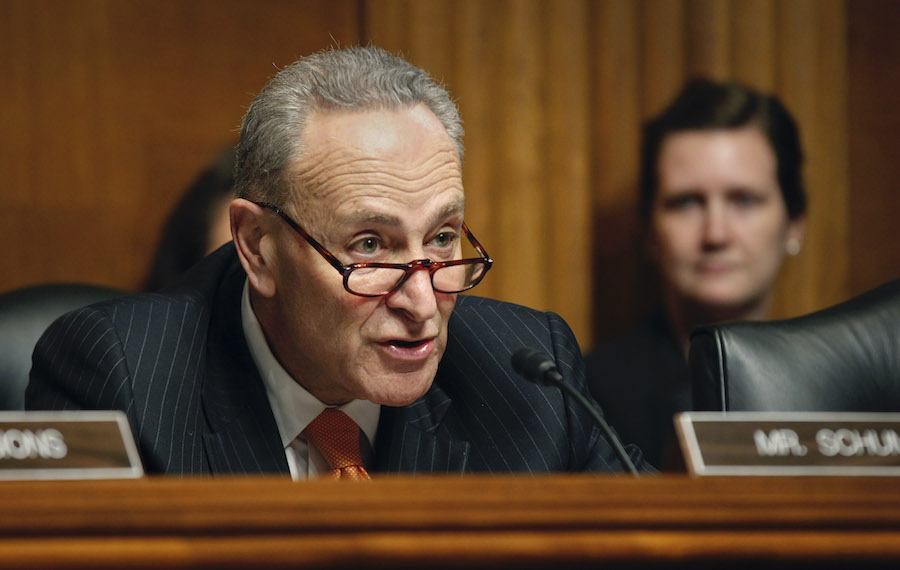 Will it be RFRA to the rescue? How ironic to think that a religious freedom law, proposed by one of America’s most liberal politicians, holds the power to undo Biden’s no-way-out COVID-19 shot mandate imposed on the military, federal contractors and federal civilian employees. The United States federal law known as the Religious Freedom Restoration Act — or “RFRA” — might just be that law.

On March 11, 1993, then-Congressman Chuck Schumer (D–NY) proposed a bill “meant to ensure religious freedoms are protected.” The bill would later be passed by an unanimous House and a nearly unanimous Senate and signed into law by President Bill Clinton. Now RFRA could hold the key to open the door for service members and federal employees to lawfully decline the COVID-19 vaccine based on religious grounds.

Religious Freedom Restoration Act of 1993 prohibits “any agency, department, or official of the United States or any State (the government) from substantially burdening a person’s exercise of religion.” RFRA reinstated the Sherbert Test that says if government were to place a burden on a person’s exercise of religion, it must demonstrate “that application of the burden to the person: (1) furthers a compelling governmental interest; and (2) is the least restrictive means of furthering that compelling governmental interest.”

In the 1997 case, City of Boerne v. Flores, the Supreme Court ruled that RFRA could not be applied to the states. Subsequently, in 2000, Congress amended the law to limit its applicability to the federal government.

How Navy SEAL 1 v. Joseph R. Biden Can Succeed on the Merits of this “Super Statute”

Enter RFRA. Even more than under First Amendment protections, RFRA ensures that the courts cannot:

Stated another way, RFRA protects honest beliefs. That’s it: nothing more, nothing less. The law is meant to protect against violation of one’s conscience. Therefore, Congress enacted RFRA “to provide very broad protection for religious liberty,” going “far beyond what [the Supreme Court] has held is constitutionally required” under the First Amendment. (Burwell v. Hobby Lobby) Indeed, the Supreme Court has called RFRA as a “super statute.” (Bostock v. Clayton County)

Further, RFRA prohibits the government from placing a “substantial burden on a person’s exercise of religion even if the burden results from a rule of general applicability.” (Hobby Lobby, 573 U.S. at 695) Under RFRA, when the government substantially burdens a person’s exercise of religion, “that person is entitled to an exemption from the rule” unless the Government can prove that the burden furthers a compelling governmental interest and is “the least restrictive means of furthering that interest.”

At the intersection of “compelling government interest” and “substantial burden,” we find Navy SEAL 1 v. Biden parked. An interest is considered compelling when it is essential or necessary rather than a matter of choice, preference or discretion.

Proponents of the mandates would argue that COVID-19 shot mandates are “essential and necessary” to stabilize public health and mitigate the harmful effects of the pandemic caused by SARS-COV-2.

But this argument has too many contraindications to justify one-size-fits-all mandates that exclude religious exemptions. These include:

Furthermore, strict scrutiny requires the government to demonstrate it is using the most narrowly tailored, or least restrictive, means to achieve a compelling interest. Although not explicitly defined, “compelling” is obviously intended to be of higher interest than “legitimate” or “important”; some have described it as “necessary” or “crucial,” meaning more than an exercise of discretion or preference.

Since RFRA still applies as a religious protection to the military, federal employees and federal civilian contractors, it has the power to shield them from unlawful government overreach in the form of vaccine mandates without exemptions. It will now remain to be seen what the courts do with this legal dilemma affecting tens of thousands who would rather “opt out” than defile both their conscience and body through compliance.

Mat Staver is the Founder and Chairman of Liberty Counsel and Chairman of Liberty Counsel Action. He has the highest AV rating given to attorneys by Martindale-Hubbell and is board certified in Appellate Practice. Mat produces and hosts Faith & Freedom, an 11-minute daily radio program, Freedom’s Call, a 60-second daily radio program and Freedom Alive, a 30-minute weekly TV program. As a former pastor and one of the nation’s preeminent constitutional attorneys, he frequently appears as a guest on national network and cable TV and radio programs and also appears in several hundred print articles each year.