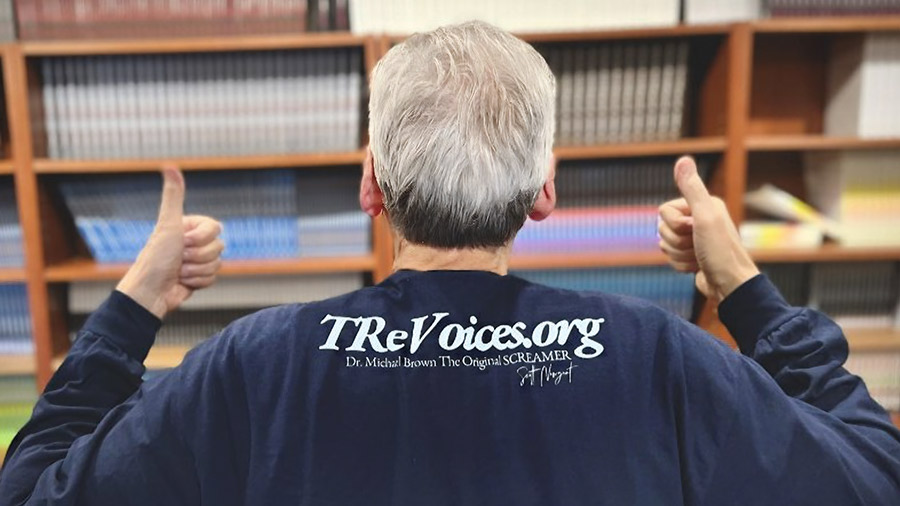 When I arrived at my office on Monday to do my daily Line of Fire broadcast there was a package waiting for me from TReVoices. In the package was a long-sleeved t-shirt with a logo on the front and an inscription on the back. And both front and back were customized with a special message which I’ll share with you in a moment. I was genuinely honored and moved.

That’s because there could hardly be two more unusual co-workers against transitioning children than Kellie (“Scott”) Newgent and me.

Kellie is a “transman,” meaning, “female to male” transgender, and when she was on my radio show, she kept her profanity button at hand lest she misspeak. Over the course of our interview, she pressed it a lot!

On my part, at her request (and with tongue in cheek), I agreed not to speak in tongues on the air if she would not use profanity.

Kellie Newgent’s Raw Interview on What Is a Woman? Destroys Opposing Arguments

But by now, you may have heard Kellie’s voice on Matt Walsh’s documentary What Is a Woman?, where she destroys opposing arguments and makes clear that no amount of drugs or surgery can change a woman into a man (or vice versa).

Kellie has been studying these issues for years, in part because of her own health problems as a result of botched surgeries and, even more so, because of her concern about the dangers of attempting to transition children. Consequently, she knows the medical data inside and out. You do not want to challenge Kellie on any of this unless you are ready to lose all credibility.

But how did the two of us connect?

After reading her bold, passionate, and thoroughly documented 2021 article in Newsweek sounding the alarm against attempts to transition children, I reached out to her. She had made clear that she would work with anyone, gay or straight, conservative or liberal — even evangelical!

And so, we connected, only for Kellie to write again and say, “Sorry, I can’t work with you. You believe in conversion therapy, and that’s a bridge too far.” (This is a paraphrase.)

I explained that I simply believed that change was possible for anyone, but I honored her concerns and left things there.

Shortly afterwards, she wrote back to me, basically saying, “I offered to work with anyone, you were the first to respond, and then I rejected your offer. That’s not right.”

So the dialogue began, with Kellie and I exchanging numerous, relevant emails and with her appearing on my show. Now, through Matt Walsh’s excellent platform, even more are hearing Kellie’s voice.

What, then, did this customized t-shirt say? On the front was a small picture of a wolf howling into a microphone. Over the picture the words “Scream Louder” were emblazoned; under it read, “Evangelical Director” (meaning me!), followed by the Scott Newgent signature. 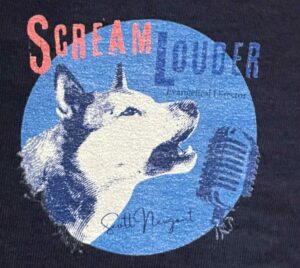 Across the back top the words read, “TReVoices.org, Dr. Michael Brown, The Original Screamer,” then the Scott Newgent signature. Really, what an honor!

When I tweeted out a picture of the shirt, Kellie responded with, “Evangelical @DrMichaelLBrown. We don’t agree on homosexuality’s, but we adult beyond that to save gender-confused kids from modern conversion therapy – ‘Honoree Evangelical Director at TReVoices’ @TyraBanksInfo U owe Dr Brown an apology; he was right about transing kids.”

Evangelical @DrMichaelLBrown We don't agree on homosexuality's, but we adult beyond that to save gender-confused kids from modern conversion therapy – "Honoree Evangelical Director at TReVoices@TyraBanksInfo U owe Dr Brown an apology; he was right about transing kids https://t.co/BS1OI0Sev2

You see, even though there were other voices drawing attention to these issues long before me, I had the privilege of appearing on the Tyra Banks show November 2009 when, for the first time, “trans” children as young as 7 or 8 were brought on stage to appear on national TV. (You can watch the segment here.)

I Asked “What is the Test?” on the First TV Show Highlighting “Transgender Children”

It was heartbreaking to witness little boys and girls paraded before the adoring in-studio audience, with their parents crying together with joy and relief. “This is Jane. Jane used to be John. But Jane is now a girl. She is 8.”

There were also pre-recorded interviews with the children. In one of these, “Jane” was asked about his male private part. (Remember: this was just an 8-year-old boy, at the oldest.) He explained that it was just a birth defect. (Soon enough it would be removed for good!)

In the course of the whole show, I was the only dissenting voice, brought on for a segment with Tyra Banks, another guest who was a straight woman fighting for trans-identified children, and Dr. “Marci” Bowers.

Dr. Bowers, himself a “male-to-female transgender,” had become known as the rock star of sex-change surgery, ultimately gaining even greater fame (or, infamy?) as the doctor who performed this surgery on Jazz Jennings.

Through the segment, I kept challenging their arguments, asking, “What is the test?” (meaning, the definitive test to identify an allegedly transgender child). As I said repeatedly, “You are experimenting with the children!”

This is the message that Kellie Newgent has been shouting in recent years (“screaming,” she would say). And since I brought this exact same message 13 years ago on Tyra, on the very first TV show highlighting “transgender children,” that made me the original screamer.

Making Progress as We Join Together in a Sacred Cause

The tragic irony of all this, as I mentioned recently when telling this story, is that Dr. Bowers now agrees that we shouldn’t be putting kids on hormone blockers or performing surgery on them. And, according to Kellie, Dr. Bowers has retreated in response to the clear message that Newgent is sounding.

Progress is being made, but for many of these young people, it’s too little, too late.

Obviously, I would love to see Kellie experience God’s love and find a wholeness she has never known before. And she probably wishes I would just chill and keep my religious convictions to myself.

Either way, I am honored to stand with Kellie and others in helping to save children’s lives. Let us all join together in this sacred cause. The kids are worth it.