Hogwarts and Hogwash: Belief in Socialism is Belief in Magic 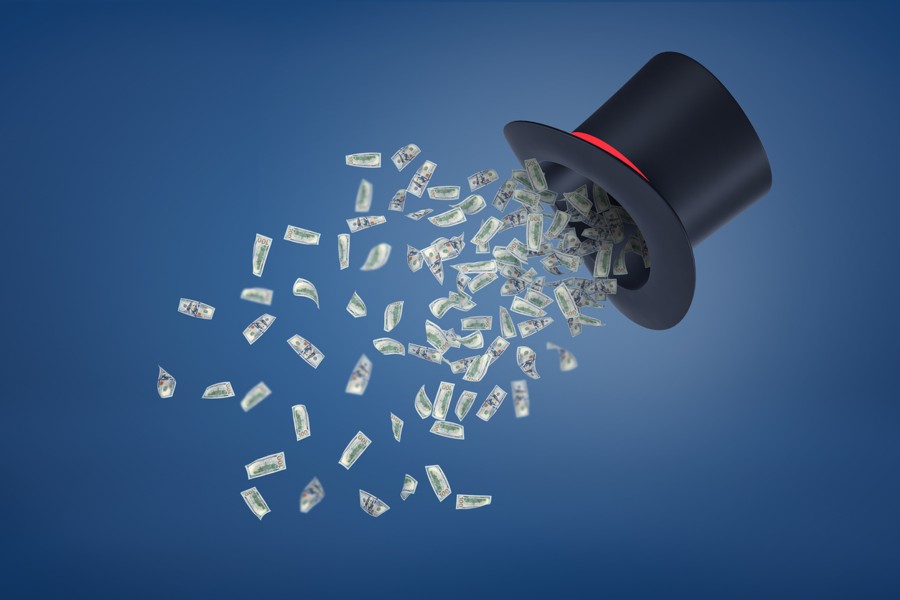 Maybe it was just a joke, as she insisted in a later tweet. Fair enough: her bio says she does standup comedy. That still doesn’t explain the oh-so-serious commenters who thought it made great real-world sense.

Alex Kumin tweeted last week, “wouldn’t it be cool if they took 1% of the military budget and just paid us all to stay home for 2 weeks” [sic]. Great idea, right? Not so much, actually. She got blowback first of all from Twitter users with calculators. One of them figured that would amount to $23 a person. Someone else figured $47 Spend it up, everyone! So her math’s a problem to start with.

But that didn’t bother some people, like the one who said, “it would actually be about 2,200ish but it could only be once and using most of the budget but still.” Or another who wrote, “We should take the entire military budget, and pay people to stay home as long as it takes.”

Or this bit of wisdom: “Yeah, but they don’t want to encourage people to get it by showing them that money can be used to meet their needs instead of spending it on the military to be destroyed.” I could go on and on with examples like these. Here’s just one more: “Or how about 50% of the military budget, and implement a UBI *and* pay us to stay home for a month.”

Not Just a Joke

Maybe Alex Kumin meant it as a joke, but these others read it as if it would be great if the government would just pay us all to stay home for a couple weeks. They kept on, even after others had pointed out another problem, bigger than the math. One person who calls himself a “cislunar male” — how in-your-face perfect is that? — answered, writing, “Stay home and do what? Burn the money in a stove to keep warm? … You’d have no place to spend the money or have things delivered.”

It’s gratifying to see that not everyone misses the obvious. The original tweet was about everyone staying home. Everyone? Who would run the grocery stores? The restaurants? The hospitals? The internet services everyone at home would certainly depend on? What about heat and light?

I can’t read their minds, but I can guess what some people were thinking: “Hey, it’s no problem. The government will do it!” Thank the powers that be, the government has been to Hogwarts!

“The City Should Take Care of Us!”

I’m reminded of something I read in our local newspaper years ago when I was living in Yorktown, Virginia. Hurricane Isabel had just come through and downed millions of trees in the region. Our own home was out of power for five days, and we were some of the luckier ones. Only one gas station on the whole peninsula had power to pump gas. Someone waiting in the mile-long line there told a reporter, “The city should have prevented this!”

The city can take care of us, and they should. They didn’t do it during Hurricane Isabel, but they should have! That’s the sentiment. I can’t help wondering how they’d do that, though. Maybe the city should have dug deep holes for huge, huge tanks, and stored enough gasoline to fill every tank in town.

Fire the city manager, and replace him with someone who didn’t fail that class at Hogwarts!

Never mind that the water table is high there, making the risk of leaky tanks absolutely enormous. Never mind that if every city in hurricane-prone regions did that, they’d hog enough gas to start a Category 5 gas price problem. Never mind the huge distribution system it would take to get it out to drivers everywhere, since pumping it from just one station would mean long lines there, too. Never mind all it would take for the city to supply power to run pumps at all those locations.

Never mind all that; it simply doesn’t matter. There’s something magical about “the city.” It doesn’t need to store gasoline, it can just pump it! It doesn’t need distribution channels; it can just put it in your tank from nowhere. The city can do things like that, so it should do things like that. And if it doesn’t do them, we can fume to reporters about the city’s failures. Fire the city manager, and replace him with someone who didn’t fail that class at Hogwarts!

Likewise with Alex Kumin’s tweet, and the commenters who took it seriously. “The government” should give us all two weeks at home, and if you wonder who’s going to supply all the goods and services we normally give each other, you’ve misunderstand the magic. Clearly the government can take care of us! Why should anyone have to work those two weeks, when we have a government that can pass out money and meet all our needs besides?

Now, maybe you’ll think I’ve missed a step in there: The government can’t run during those two weeks unless people who are employed by the government go to work after all. But you’ll only raise that objection if you disbelieve in the magic.

The Other Problem with Socialism

If I believed in magic like that, I might believe in socialism, too. But no, not even then, because I still believe in work. Work with dignity, of course; and I know we fall short on making that possible for everyone. It’s still the goal, the target, because it’s not just work, it’s people doing good things, serving each other.

Have you ever prayed and thanked God before a meal? Then you’ve thanked God for farmers, and for those who supply the farms. You’ve thanked Him for the packers, the truckers, the grocery store workers, and (not to forget them) the people who made the equipment you’ve cooked with, or maybe the restaurant workers who brought the food to your table.

You thank God because these people have done good things, for which thankfulness is appropriate. While few if any of them know you, they did it for you, which is a good thing for them to do. When you go to work, you do good things for others, too. (Or at least I trust that you do. It’s possible there’s a rogue or two reading this, but not many.) And it is good — need I even say it? — to do good for one another.

I get that some jobs stink. The work stinks, the boss stinks, the pay stinks, and for all that, “It still doesn’t pay the bills; not for me and my family, but look at all those rich people who don’t have to worry about all that! Maybe magic isn’t real, but we can dream, can’t we?”

Why People Believe in Socialism

People believe in socialism because they believe in magic. Either that, or they’ve never thought to ask, “Can the government make all the things we want to buy with all the money it gives us? How will the government actually give us everything it’s promised us for free? And why think the world should run on people getting more than they give?”

Dreaming can be such a nice substitute for thinking. Dreaming of magic can be especially delightful. But real-world policy can’t live on such dreams. Casting a vote for socialism is like casting your vote for Harry Potter. Everyone knows he’s fiction. Everyone ought to know that dreams of successful socialism are, too.