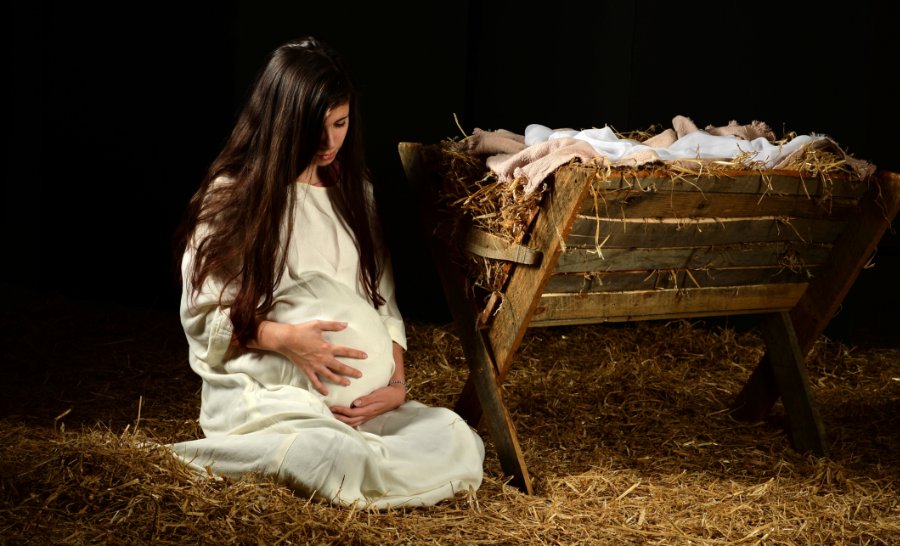 Advent — a term many Christians use to describe the weeks leading up to Christmas — is upon us. The word literally means “a coming into being,” a beginning. It’s a time of preparation and anticipation — four weeks to ready our hearts for the miracle arrival of Immanuel. But Advent, somehow, represents even more than divinity wrapping Himself in humanity. For those with eyes to see and ears to hear, Advent reminds us that Baby Jesus was alive long before he was born — that his Bethlehem birth was not his beginning.

The Gospels tell us that early in her pregnancy, Mary visited a relative named Elizabeth, who also was pregnant — or “with child,” as Matthew 1 and Luke 2 put it. “When Elizabeth heard Mary’s greeting, the baby leaped in her womb, and Elizabeth was filled with the Holy Spirit,” Luke’s account cheers. “As soon as the sound of your greeting reached my ears,” Elizabeth exclaims, “the baby in my womb leaped for joy.”

Read that again. The Bible tells us Elizabeth’s unborn baby, who would be known as John the Baptist, leaped for joy when his mother encountered Mary, who would deliver the Good News to the world — literally. Another translation says Elizabeth “sang out exuberantly.” The very “moment the sound of your greeting entered my ears,” Elizabeth gushes, “the babe in my womb skipped like a lamb for sheer joy.” Yet another quotes Elizabeth as exclaiming, “The instant I heard your voice, my baby moved in me for joy!”

Mary, too, is moved by the moment and by the Holy Spirit. “My soul glorifies the Lord and my spirit rejoices in God my Savior,” she sings. “From now on, all generations will call me blessed, for the Mighty One has done great things for me.”

There are a few important takeaways here that we tend to miss, given that we focus so much on the birth of Jesus.

First, the Gospel writers, guided and inspired by the Holy Spirit, use the term “with child.” That’s a definitive statement about when life begins — an echo of what we hear in Psalm 119, Psalm 139, Job 10, Isaiah 44 and Jeremiah 1. Elizabeth herself references the “baby” leaping inside her — not an unviable tissue mass, not a choice, not a mistake, not a problem. This is a baby; this is a child.

Second, Elizabeth sang out and her baby leaped for joy in that “secret place” where we are “fearfully and wonderfully made” not because mother and child saw Jesus walk on water or raise the dead or heal the crippled or feed the thousands or turn water to wine or ascend to heaven, but because they were in the presence of God. The Eternal One was at that moment, somehow, unborn. The Great I Am was at that moment, somehow, taking on human flesh and “coming into being.”

The only thing Elizabeth’s baby could do was praise his Lord: As Jesus, quoting the psalmist, tells us, “From the lips of children and infants, you, Lord, have called forth your praise.”

At that transcendent moment, Mary, Elizabeth and John hold humanity’s first praise-and-worship gathering for Immanuel — “God with us.”

Ponder that. Reflect on it. Savor it. Rejoice in it. Wrestle with it. This truth should stretch the mind, overwhelm the heart, convict the passive, and inspire those who have been deploying their prayers, their time, their talents, their treasure to secure the last frontier of human rights and civil rights — the right to life for the very weakest among us.

We celebrate Jesus as a babe in the manger on Christmas morning. We marvel at him as a teacher sharing eternal truths. We put our hope in him as a healer. We are humbled by him as he washes humanity’s filthy feet and filthier hearts. And we are transformed by his blood-soaked suffering, his death on the cross, his resurrection on Easter. But we somehow forget or never even consider that before all that — before he rolled away the stone, before he laid down his life for all of us and each of us, before the blood poured from his brow and back, before he stooped low to cleanse us and feed us and teach us, before he was a baby born in Bethlehem — Jesus was a fetus, an embryo, a zygote, a tiny cluster cells no wider than the diameter of a strand of Mary’s hair. And this Jesus, even though He was unborn and unformed, was very much alive.

For nine months before that first Christmas morning, the heart that pumped the blood which would take away all our sins, the feet that walked on water and walked the road to Golgotha, the hands torn apart by Roman nails, the arms that hugged little children and shielded the adulterous woman, the eyes that wept over Jerusalem and Lazarus, the vocal cords that stilled the storm-tossed sea and comforted Jairus and terrified Pilate and commanded the demons and transformed the woman at the well and forgave the thief — all of this was being “knitted together” in Mary’s womb.

Now more than ever, we need to think of Jesus this way. After all, we live in an era when respected, even lionized national figures casually and callously talk about abortion as a tool of poverty reduction. We live in a country that not only euphemizes abortion with words like “choice” and “rights,” but laughs about what abortion is and does. We live in a culture that scorns and mocks any effort to protect unborn life, that fools itself into believing we determine when life begins, that applauds someone who credits abortion with her career success. Lord, have mercy. Thank God her mother didn’t hold that view. Thank God my mother didn’t. Thank God Mary didn’t.

A latter-day David would turn to heaven and beg for mercy, for hyssop to wash away the blood of Roe’s lost generations. Were Isaiah here, he would turn to us and call on a wayward people to defend the fatherless, the oppressed, the weak — rather than erase them. If only we knew God as well as the pagan people of Nineveh, we would clothe ourselves in sackcloth and plead for forgiveness.

Yes, we should be transformed by Christ’s resurrection and his defeat of death on Easter Sunday. We should be awed by his sacrifice at the cross on Good Friday. We should celebrate His birth on Christmas morning. But we should also remember that his life began before his birth.

Before we read about the shepherds and the heavenly hosts, the no-vacancy inn and the newborn Jesus, we should wrestle with what the Gospels tell us about the nine months preceding all of that — and the miracle of the preborn Jesus.

The Gospels don’t gloss over those months. In fact, Matthew and Luke devote 38 verses to the life of the preborn Jesus.

Those verses tell us about encounters with angels and prophecies fulfilled. They describe how the Holy Spirit quite literally gives life and how Mary quite literally accepted Jesus. They explain how Elizabeth and her unborn son react to being in the presence of the unborn Son of God. They capture the Spirit-fueled praise songs of John, Elizabeth and Mary. And they touch on the difficulties of what — at least for Mary and Joseph — was an unplanned pregnancy. Luke’s account tells us Mary “was greatly troubled” and confused by what Gabriel told her. Matthew’s account suggests Joseph was initially skeptical of Mary’s explanation. But the Holy Spirit brought peace to both of them — the peace that transcends all understanding. These verses remind us that, as with most every pregnancy, there are anxieties, questions, worries — but ultimately there is hope and joy. And there is life.

These pre-Christmas verses are so much more than a prelude to the manger and the Magi. They are an emphatic statement from the Author of life, from the One who calls himself “the way and the truth and the life,” from the Spirit who gives life about the beginning of life.