Have the Seven Seals of the Book of Revelation Been Opened? 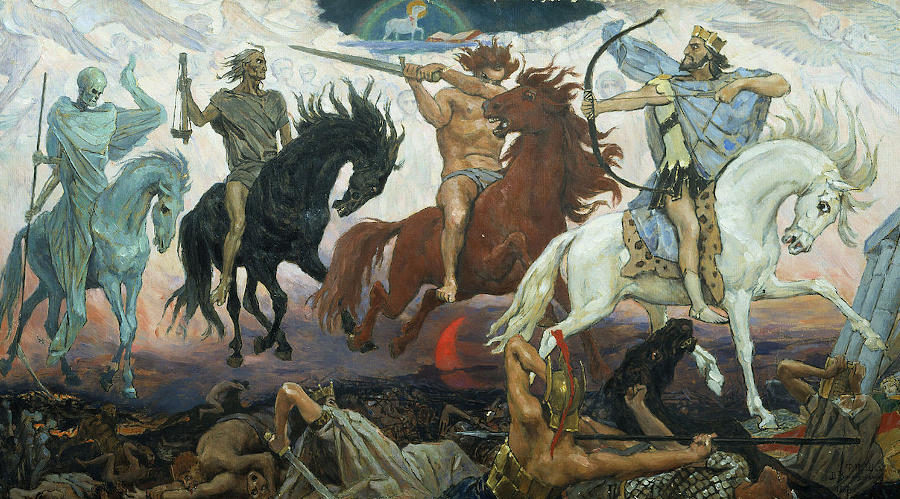 "Four Horsemen of the Apocalypse," a painting by Viktor Mikhailovich Vasnetsov, depicts the opening of the first seal from Revelation 6.

The same, unusual subject came up three times on the same day, this past Monday, May 11. Was God sending a message to me about the end of the world, taken straight from the pages of the Book of Revelation?

Three References in One Day to the First of Seven Seals, the Four Horsemen

First, a caller to my radio show asked if we might be in the first phase of the breaking of the seven seals in the Book of Revelation and therefore in the beginning of “the tribulation.”

Then, a friend left a message on my cell phone asking what he should make of a respected Christian leader in another country telling him that the first of the seven seals was being opened?

Then, I spotted this headline featured on Drudge Report: “‘Four Horsemen are ACTIVE’ Bible scholars claim Book of Revelation seals broken…” As the article, since removed, explained, “Bible scholars have sensationally claimed the end of the world could be upon us as they believe the Four Horsemen, who bring about death, war, famine and disease before the return of Jesus Christ in the holy book, have all been released.”

What are we to make of these questions and claims? And what of the statements of these “Bible scholars”?

Not surprisingly, the article that claimed the support of biblical scholars was published in the UK’s Express, known for its sometimes sensationalistic reporting.

As for the scholars, the article quoted none. Instead, it referenced a 2005 article by a non-scholar and then — I kid you not — the article cited a twitter user. So much for the notion that “Bible scholars have sensationally claimed the end of the world could be upon us.”

The only thing sensational was the headline, followed by the article itself.

“But,” someone might say, “what about Revelation? What does it say?”

What Does Revelation Say About the Four Horsemen?

How about we take look?

Let’s examine each of the four horsemen.

Revelation 6 begins with these words: “I watched as the Lamb [meaning Jesus] opened the first of the seven seals. Then I heard one of the four living creatures say in a voice like thunder, ‘Come!’ I looked, and there before me was a white horse! Its rider held a bow, and he was given a crown, and he rode out as a conqueror bent on conquest” (Revelation 6:1–2, NIV).

Where, pray tell, is this world-conquering figure? And how has he emerged since the pandemic began?

Let’s call this strike one.

The text continues, “When the Lamb opened the second seal, I heard the second living creature say, ‘Come!’ Then another horse came out, a fiery red one. Its rider was given power to take peace from the earth and to make people kill each other. To him was given a large sword” (Revelation 6:3–4, NIV).

How, pray tell, has peace been taken from the earth? And are people killing each more today than during World War II? Or World War I? Or, here in America, during the Civil War?

Back to Revelation: “When the Lamb broke the third seal, I heard the third living being say, ‘Come!’ I looked up and saw a black horse, and its rider was holding a pair of scales in his hand. And I heard a voice from among the four living beings say, ‘A loaf of wheat bread or three loaves of barley will cost a day’s pay. And don’t waste the olive oil and wine.’” (Revelation 6:5–6, NLT)

Could it be that massive famine will overtake the entire world because of the financial meltdown? It’s possible, but we are nowhere near that now. As for the fact that many more people face potential starvation because of the pandemic, that is a tragic reality. But it is hardly what is described here.

We’re now up to strike three. But since there are four horsemen, let’s give it one more shot.

“When the Lamb opened the fourth seal, I heard the voice of the fourth living creature say, ‘Come!’ I looked, and there before me was a pale horse! Its rider was named Death, and Hades was following close behind him. They were given power over a fourth of the earth to kill by sword, famine and plague, and by the wild beasts of the earth” (Revelation 6:7–8, NIV).

A fourth of the earth, at present, would amount to almost two billion people, whereas the pandemic has taken less than 300,000 lives. This represents .00015 percent of that number.

The End of the World Will Be Self-Evident

That’s why I tweeted this later that same day (Monday): “A caller today wanted to know if we might be experiencing the divine judgments of the seven seals in Revelation and therefore ‘in the tribulation.’ I told her that when that time comes, she won’t need to call into my show to ask.”

That also means that, if the Christian leader who called my friend is right and the first of the seven seals has been opened, things will change in front of our eyes more quickly and dramatically than we can imagine.

Will that happen? We shall see. But I can say without hesitation it is not happening yet.

On March 2, I wrote my first article on COVID-19, titled, “Is the Coronavirus an End-Time Biblical Plague?” (This has been expanded into a full chapter in my new book When the World Stops: Words of Hope, Faith, and Wisdom in the Midst of Crisis.)

My answer then was no. My answer remains the same today.

This is not to minimize the very real suffering caused by the pandemic. Nor is it to minimize end-time Bible prophecy. Quite the opposite. My goal is simply to put things in proper perspective.

In short, we have not yet reached the end of the world. When we get to that point in time, we won’t need an article in the Express to let us know.

The Shutdown, the Sabbath and a Weekly Divine Reset