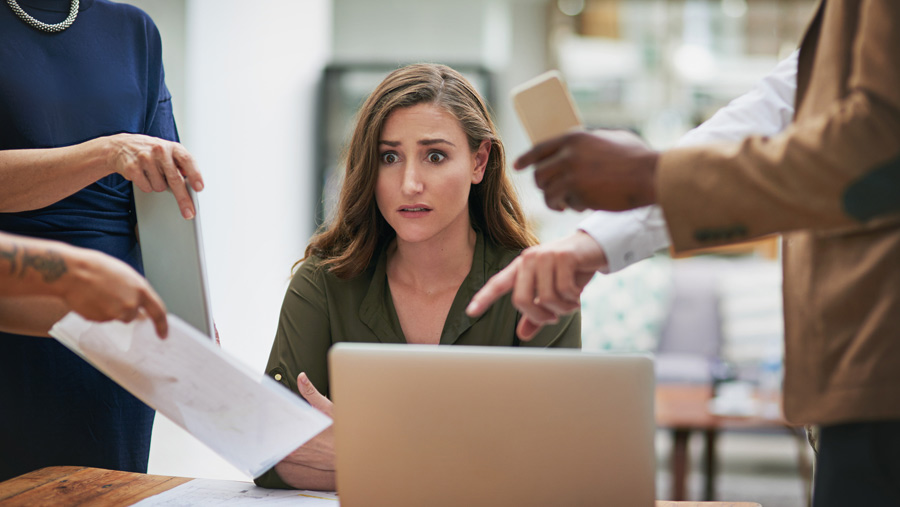 “Behold, how good and pleasant it is when brothers dwell in unity!” — Psalm 133:1

In my last column, I talked about the importance of Christ-followers in Christian workplaces giving full diligence to their duties, knowing that family members in the Lord are benefiting. Then I addressed the importance of Christians in authority not oppressing their employees but instead practicing servant leadership, as Jesus Christ exemplified with His disciples.

Sounds great, right? But many of us know in practice that difficulties can arise. With what spirit should we address conflicts, particularly interpersonal ones?

Most Christian leaders would claim they are accessible. But the litmus test is whether that accessibility extends to the receiving of critical feedback from a subordinate. Now it’s very important that any such feedback be presented as a gift, an attempt to serve and help rather than belittle or tear down. That’s the feedback giver’s responsibility, though, not the leader’s. It’s easier to take feedback when it’s offered that way, but a godly leader will take it “under advisement” even if it isn’t. That’s code for, “I’ll really think about it.”

She may decide she only agrees with a fraction of it. It still behooves her to consider how her actions, words, style, or tone may be contributing to that critical feedback. As a teacher, for example, if a student tells me something I’m doing isn’t working for them, I need to at least consider their perspective. A teacher doesn’t exist for himself. He’s there to facilitate the success of his students. Similarly, a Christian leader measures her effectiveness by her subordinates’ success. So critical feedback should be received with sincerity and thoughtfulness. Especially if it’s coming from a higher performing subordinate.

There’s yet another level of accessibility to which Christian leaders should aspire: Pursuit. We see it in Jesus’ story about leaving the 99 to bring home the one wayward sheep. So for example, if you see a drop in engagement or performance from a subordinate, why not reach out? It could be as simple as an e-mail or quick hallway remark, “I’ve really appreciated your great work over the years. Maybe I’m wrong, but it looks like something is bothering you lately. Let me know if we can chat about it.” Maybe they’re dealing with a health crisis or a family matter. Or perhaps a recent organization change is bugging them.

Don’t view it as, “I need to fix you.” If the other person feels you are a project for them, they’ll recoil. Come alongside them.

This kind of initiative speaks volumes — it shows you really care. It also gives them an opening to share things they may have wanted to talk about, but didn’t feel the freedom or confidence to bring up. It could even be that something you have done or said has gotten under their skin. A conversation on that can be of mutual benefit, because a restored relationship helps you both be more effective in your work.

Here’s a caution, though: Don’t view it as, “I need to fix you.” If the other person feels you are a project for them, they’ll recoil. Come alongside them. Don’t speak from a position of moral superiority.

That won’t always work, though. Sometimes the comfort level has shrunk so low, one or both of you knows a conversation just isn’t the right idea. That’s when it helps to have a neutral group to which employees can politely raise concerns.

Let’s say Amanda reports to Jon and Jon reports to Sarah. If Amanda has a problem with Jon, but isn’t comfortable raising it with him, she’s probably also uncomfortable raising it with Sarah. Sarah will probably take Jon’s side, if for no other reason than out of loyalty to her direct report. In other words, Sarah may be great, but she also may also be biased in favor of Jon.

Christian organizations sometimes assume all problems can be dealt with through the chain of command. This approach doesn’t sufficiently recognize that we’re living in a fallen world, where we Christians aren’t yet perfected. If an employee’s only redress is “talk to your boss, or to your boss’s boss,” he may just bury his difficulties and concerns. Employees know how much they have to lose, so the answer for many is either to keep quiet or to leave.

An organization’s human resource department can serve as that neutral listening post. In some churches it could be an executive pastor who serves that role. Or the organization could identify a group of approved individuals, based on their character qualities and the esteem in which they are held across the organization. The higher and broader their credibility, the more effective they’ll likely be in this kind of mediating capacity.

So in the scenario above, Amanda could raise her concerns to a neutral mediator. That person would then decide the next best steps. He might take Amanda’s concerns to Jon, with or without revealing her identity, and hear his side of the story.

Whatever the approach, the goal must be redemptive, not punitive, for both parties. The best-case outcome is often a three-way conversation in which both Amanda and Jon feel the liberty to speak and be heard, where they’re both open to discovering ways to improve, and where each one feels respected, valued, and motivated to excel in their respective roles — and where ultimately their relationship is restored as well.

Conflict management processes can be hard. Are they worth it? Isn’t it easier just to live with the relational distancing? Isn’t it more “professional” for each person to just “do their job” and not think about the relationships?

The answer is yes, of course, it’s worth it. It’s worth it if you want to get the most out of your team. People will naturally do their best work when they feel valued and respected. And the way things are these days, every Christian organization really does need all hands on deck.

And it isn’t just for getting the job done, anyway. God is a God of love and unity (Ephesians 4:3), and He calls us to follow in His ways.

“Behold, how good and pleasant it is when brothers dwell in unity!” — Psalm 133:1

The Call for Leaders After God’s Heart