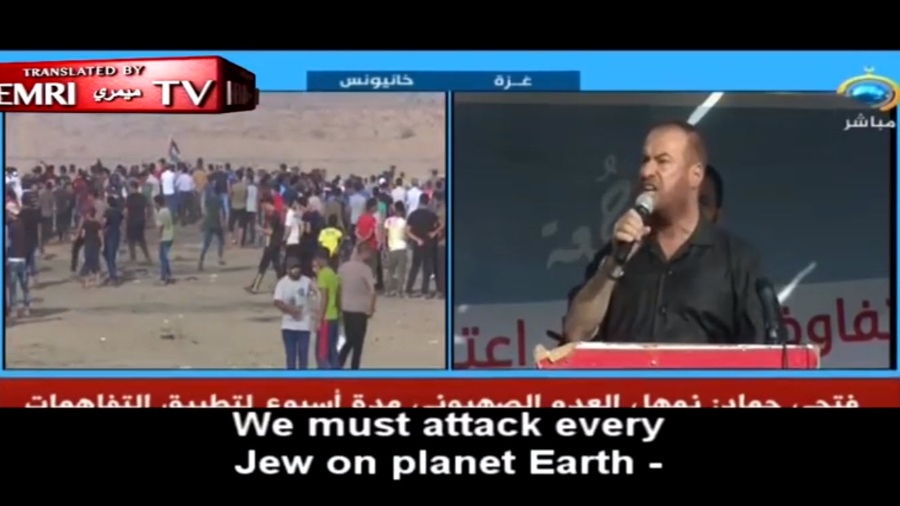 Well, that myth has now been blown out of the water. A senior Hamas leader has called for the slaughter of every Jew on planet earth. Those were literally his words.

Hamas Leader: Lift the Seige or We Kill All Jews on Earth

As reported on Memri TV, Hamas Political Bureau member Fathi Hammad said in a July 12 speech that aired on TV that Israel had one week, until July 19, to lift the siege on the Gaza Strip and implement its understandings with Hamas. If not, Memri reported, “the Palestinians in Gaza, the West Bank, and all over the world would use the ‘many methods and means’ that are ‘up their sleeves’ to ‘powerfully explode’ in Israel’s face.

“He said that, contrary to what Israel thinks, the Gazans are not rational, and that if they die, they will do so honorably while cutting off the heads of Jews and killing them with explosive belts, which he said Hamas has been actively manufacturing in factories.

Hammad said: ‘Enough warming up… We must attack every Jew on planet Earth and slaughter and kill them.’

“Calling on the seven million Palestinians abroad, whom he said have been ‘warming up’ and ‘preparing,’ Hammad said: ‘Enough warming up… We must attack every Jew on planet Earth and slaughter and kill them.’ Hammad also encouraged Palestinians in the West Bank to purchase knives in order to cut the necks of Jews, saying that knives only cost five shekels. He added: ‘We will die while exploding and cutting the necks and legs of the Jews. We will lacerate them and tear them to pieces, Allah willing!’”

Yes, he said to his fellow-Palestinians worldwide, “We must attack every Jew on planet Earth and slaughter and kill them.”

But this should not be a surprise at all.

Not Simply Anti-Zionist But Anti-Jew

The original Hamas charter was filled with hostility towards the Jewish people, called in Koranic language “the people of the Book.” (At times this can refer to Christians as well, but here, in the charter, it explicitly refers to the Jews.)

As the charter stated, “They will not harm you save a trifling hurt, and if they fight against you they will turn and flee. And afterward they will not be helped.”

And, quoting from early Islamic writings, “They have incurred anger from their Lord, and wretchedness is laid upon them. That is because they used to disbelieve the revelations of Allah, and slew the Prophets wrongfully.”

The charter also cites a famous Islamic Hadith. It states, “The time [of the end] will not come until Muslims will fight the Jews (and kill them); until the Jews hide behind rocks and trees, which will cry: O Muslim! there is a Jew hiding behind me, come on and kill him!”

Indeed, the charter declares, “For our struggle against the Jews is extremely wide-ranging and grave, so much so that it will need all the loyal efforts we can wield, to be followed by further steps and reinforced by successive battalions from the multifarious Arab and Islamic world, until the enemies are defeated and Allah’s victory prevails.”

The charter also references the “Nazism of the Jews.” It states that, “Israel, by virtue of its being Jewish and of having a Jewish population, defies Islam and the Muslims.”

“The Jews Control Everything,” and Other Standard Anti-Semitic Fare

And just how influential and destructive are these Jews? The charter speaks of “the various Zionist Organizations which take on all sorts of names and shapes such as: the Free Masons, Rotary Clubs, gangs of spies and the like.”

But of course! We always knew that the Jews controlled the Free Masons and Rotary Clubs.

Indeed, we are told, “All of them are nests of saboteurs and sabotage. Those Zionist organizations control vast material resources, which enable them to fulfill their mission amidst societies, with a view of implementing Zionist goals and sowing the concepts that can be of use to the enemy.”

Does this not echo the standard antisemitic libels? The Jews, who are the leaders and the creators of these nefarious “Zionist organizations” control “vast material resources.” Through their power they will ultimately subdue the world.

The battle for Palestine, then, is but a microcosm of the worldwide battle against the Jews.

Yes, “Those organizations operate [in a situation] where Islam is absent from the arena and alienated from its people. Thus, the Muslims must fulfill their duty in confronting the schemes of those saboteurs.”

Just The Next Step

What Hamas leader Fathi Hammad said this past Friday simply took things to the next step, calling for Palestinians to slaughter Jews worldwide.

Last year, Hamas leader Yahya Sinwar cried out from Gaza, “We will take down Israel’s border and tear out Israeli hearts from their bodies.”

I truly pity the Palestinians who have put their trust in Hamas, and I grieve over the pain they have experienced. And I pray for peace and harmony and equity between the Israelis and the Palestinians.

I also pray that Hammad’s words will fall to the ground without harm or effect. May his efforts to stir up violence against the Jewish people fail miserably!

And yes, for the record, this is another reminder of why America is right to classify Hamas as a terrorist group. (For more on the spiritual roots of antisemitism, see here.)